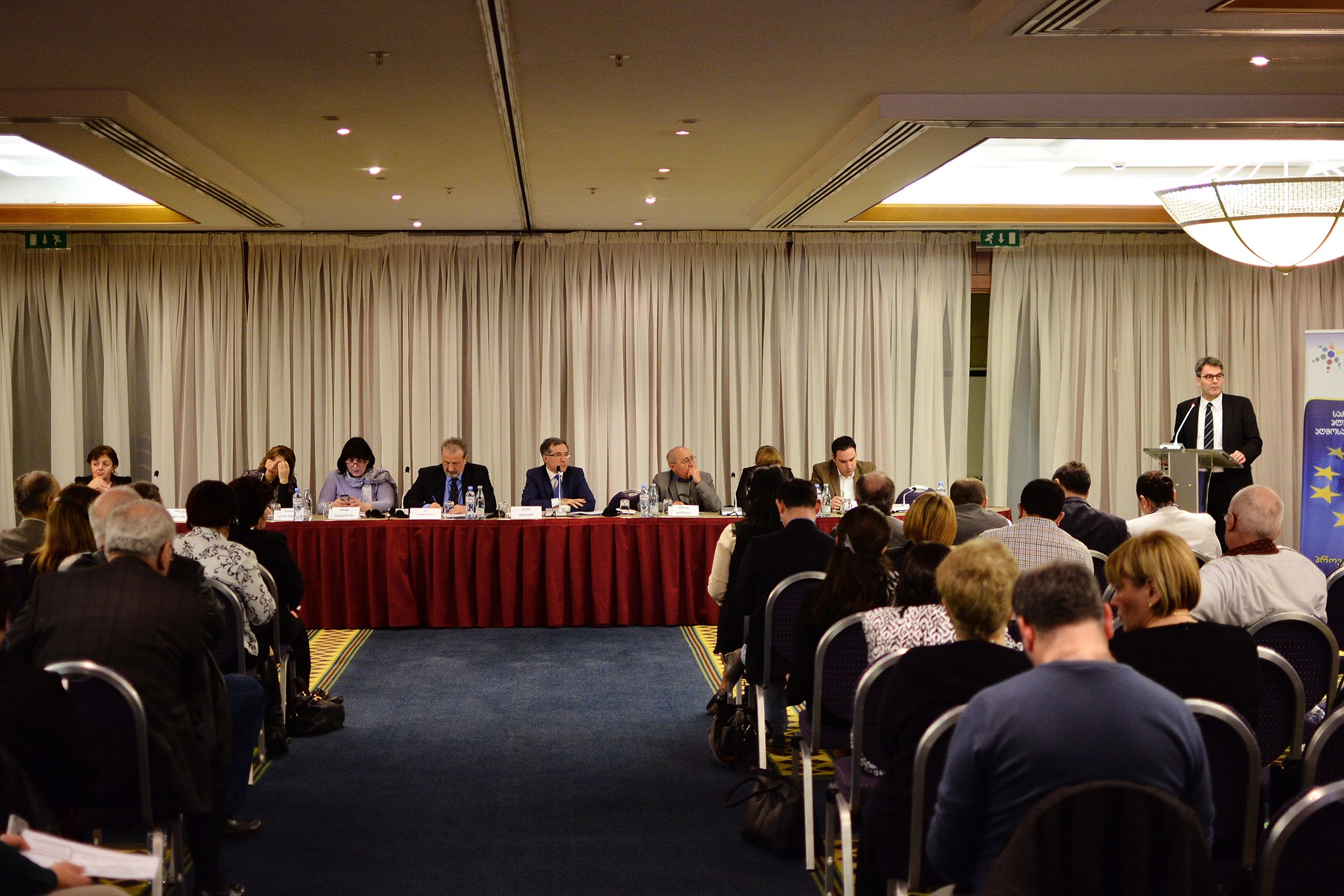 The Georgian National Platform of the Eastern Partnership Civil Society Forum (EaP CSF) held its 7th General Assembly on February 29, 2016, with the purpose of summarizing the platform’s one year performance, and electing its chairman and working group coordinators. The assembly was attended by 130 representatives from 86 member organizations.
The activities of the Civil Society Forum include four thematic platforms of the Eastern Partnership, organized in four working groups:

The 7th General Assembly was opened by Lasha Tugushi, chairman of the Georgian National Platform. He reviewed the main events of 2015 in terms of European integration, including the successful completion of the visa liberalization action plan, and stated that the national platform shares European perspectives. After this, welcome speeches were made by Archil Karaulashvili, First Deputy Minister of European and Euro-Atlantic Integration, and Stephen Stork, Deputy Head of Operations Section of the Delegation of the European Union to Georgia. The first speaker emphasized the need for close cooperation between the government and non-governmental organizations, and expressed readiness to support civil society’s active involvement in the process of European integration. The second speaker spoke about the importance of the Association Agreement and efforts of the Georgian government in this regard, stressing that the EU supports the Georgian National Platform.

Kakha Gogolashvili was elected as the new chairman of the Georgian National Platform. Gogolashvili is a Senior Fellow at the Georgian Foundation for Strategic and International Studies (GFSIS), and the director of Center for EU Studies.

One of 4 total candidates for the coordinator of Working Group I (democracy, human rights, good governance and stability) was Giorgi Kldiashvili, director of the Institute for Development of Freedom of Information (IDFI). A total of 84 member organizations voted for the 4 candidates, resulting in a split vote between Giorgi Kldiashvili, director of IDFI, and Ana Natsvlishvili, chairwoman of the Georgian Young Lawyers' Association. They will together coordinate Working Group I.

The Eastern Partnership was launched in 2009 and is a bilateral and multilateral cooperation mechanism of the EU with its Eastern Neighborhood. The initiative offers Eastern Neighborhood countries opportunities to deepen their political and economic cooperation and integration with the EU. The Eastern Partnership Civil Society Forum is composed on civil society representatives from Georgia, Azerbaijan, Belarus, Moldova, Armenia, and Ukraine, as well as from EU member states, and international non-governmental organizations. The forum aims to promote the development of civil society organization of six partner countries, cooperation among these organizations, dialogue with the public institutions, and achieving the Eastern Partnership goals in partner countries. The Georgian National Platform was set up in November 2010. IDFI has been a member of the platform since 2012.