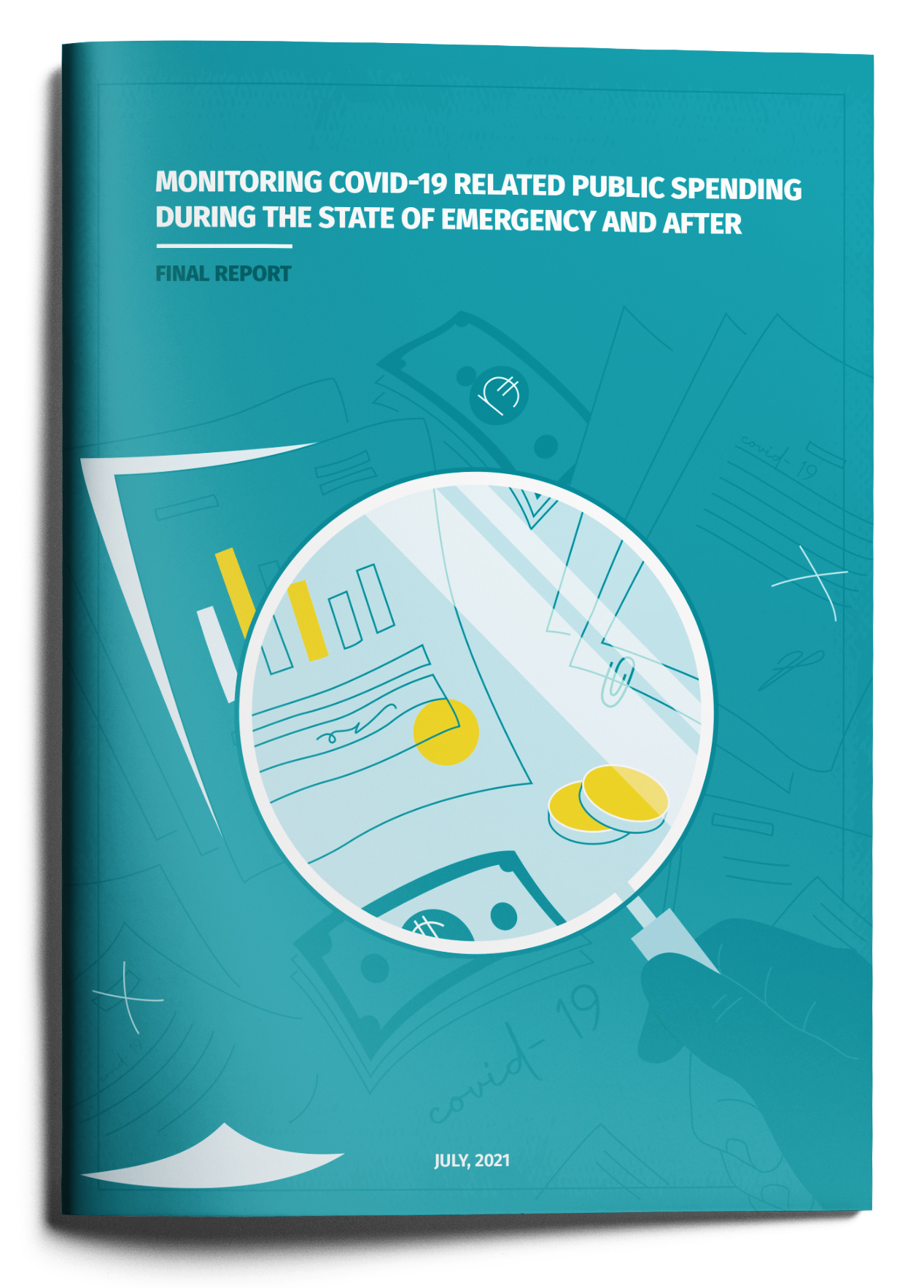 After the onset of the coronavirus (Covid-19) pandemic, the world, including Georgia, began to fight to save the health and lives of its citizens on the one hand, and the country's economy on the other. Combating the difficulties caused by the pandemic required significant financial resources, which was a particular challenge for countries with similar economic status as Georgia. In particular, to alleviate the consequences of the pandemic, it was necessary to implement measures to curb the virus and mobilize additional medical resources to provide social support for citizens, save businesses, and support the economy.

The Institute for Development of Freedom of Information (IDFI), with the support of the European Union (EU), has implemented the project "Monitoring of Covid-19-related costs and human rights protection during and after the state of emergency". To improve the effectiveness of the measures against the pandemic in Georgia, the initiative monitored Covid-19-related public finances, public procurement, government Anti-Crisis Plan implementation, StopCov Fund spending, and donor assistance distribution.

This document is a summary report of the project, which reviews the results, key findings, and recommendations as a result of the monitoring efforts of the Georgian authorities’ anti-crisis measures implemented during the first year in the fight against the pandemic, their funding sources, and related expenditures. Given the dates of the onset of the virus outbreak in the country (first confirmed case -  February 26, 2020), declaration of a state of emergency (March 21, 2020), and development of an Anti-Crisis Plan (submission of an Anti-Crisis Plan on April 24, 2020), the report covers a period of 1 year. For the purposes of this report, 1 year of the fight against the pandemic is counted as the year 2020 and the first quarter of 2021.

The report pays special attention to the purpose of expenditures from among the sources of funding for anti-crisis measures (budget support loans and grants received from abroad, domestic debt, StopCov Fund, etc.). However, the document also provides an overview of the management practice of investments (investment loans and grants) and targeted financing (targeted grants allocated to budget agencies) received from abroad, government and municipal reserve funds, and other sources within which the allocated resources, in their content, may have been directly or indirectly related to the pandemic.

IDFI examined publicly available documents/data to monitor the funds mobilized by the Government of Georgia and its expenditures in the fight against the coronavirus pandemic. It also requested detailed information from public institutions for a thorough analysis of individual topics.

- In 2020, 63% of foreign loans disbursed were spent on budget support, 14% on road infrastructure, 7% on the balance of payments support, 7% on municipal infrastructure, 6% on the health sector, 1% on the energy sector, and 2% on other expenditures.

- Within the framework of investment credits, the funds utilized for individual projects significantly lag behind their planned indicators.

- In 2020 and the first quarter of 2021, out of 98.4 million GEL used within the targeted grants received by budgetary institutions, 14.8 million was spent on labor remuneration and 44.9 million GEL on goods and services.

- Between February 2020 and March 2021, 113 procurement/price quotes were announced in the electronic public procurement system with the use of donor funds. Among these, only 7 out of 10 tenders announced by the Ministry of Health under the Rapid Response Project against Covid-19 were carried out, and their total value amounted to 13 million 800 thousand GEL. In several cases, contracts were concluded with companies donating to the ruling party.

- According to budget spending reports, a total of GEL 4.15 billion was spent on anti-crisis measures over the first year since the beginning of the pandemic. Among these, 594.4 million GEL was spent on healthcare, 1.13 billion GEL on social assistance to the population, 786.9 million GEL on business support, and the remaining 1.63 billion GEL on additional packages to support the economy.

- The Ministry of Health spent GEL 146,840,376 for the purchase of various means to prevent the spread of the virus, including Covid tests. The expenses were paid by various agencies subordinated to the Ministry, including: the staff of the Ministry itself spent a total of more than 21 million GEL; NNLE Medical Holding - GEL 1,670,320, Emergency Management and Coordination Center - GEL 1,344,545; Center for Disease Control and Public Health and Lugar Laboratory together - more than 10 million GEL; over than $33.5 million (more than GEL 111.5 million) was spent on the procurement of tests.

- According to the Ministry of Health, as of the first quarter of 2021, the infrastructural organization of medical institutions within the framework of the loans has not yet been completed.

- In terms of social protection, the largest amount of funds - 469.6 million GEL - was spent on subsidies for utility bills of the population during the 1 year. The increase in these costs was precipitated by the increase in tariffs for electricity.

- GEL 450 million was allocated from the 2020 budget for the 200 GEL assistance program for the unemployed. Not even a third of the funds allocated during the program (May-November) was disbursed.

- Most of the money mobilized through the StopCov Fund was spent on helping children under 18 (925,000 children). A total of 185 million was spent on the program, which exceeds the allocated budget of GEL 160 million by +16%. The assistance was uniform (200 GEL) regardless of the social status of the child.

- As part of the business support measures, the largest share of the funds spent in one year was the income tax exemption - GEL 443.9 million.

- More than half (86.7 thousand tons) of the 168.3 thousand tons of grapes purchased within the framework of the grape harvest subsidy program was purchased by a state-owned enterprise (JSC “Akura”).

- Farmers spent 31.2 million GEL on the purchase of specific goods from specialty stores and only 25.7 thousand GEL on plowing services by utilizing the points accrued through the agricultural card.

- During the pandemic, some municipalities incurred expenditures funded through their reserve funds that raise questions about their necessity, while individual municipalities were completely unable to use the funds allocated from the reserve fund.

In the one year of fighting against the coronavirus pandemic, the Georgian government expended significant financial resources, with the main sources of these funds being budget support loans and grants received from abroad. The Anti-Crisis Plan developed by the Georgian government has alleviated the economic problems caused by the pandemic to the population and businesses. However, IDFI believes that under the conditions of effective planning and implementation of individual programs and measures, it would be possible to allocate significant resources that would make it possible to increase the target segment and the volume of assistance.

The analysis of expenditures on healthcare under the Anti-Crisis Plan raises several questions regarding the effective management of individual processes. For example, the delayed vaccination process and the covered costs, the low costs incurred for the arrangement of medical infrastructure, and so on.

The initiative of the State Audit Office to study the effectiveness of the government's Anti-Crisis Plan and its compliance with the law, as well as the procurements of the Ministry of Health and its subordinate agencies, are to be welcomed.

According to the results of the monitoring carried out by IDFI, one of the most important problems is the low degree of transparency of finances related to the Covid-19 measures. In particular, a number of agencies responsible for anti-crisis measures have refrained from disclosing detailed information in accordance with public information requirements, significantly undermining public confidence in the steps they have taken in the event of a crisis and increasing the risk of irrational mismanagement of budget funds. In light of these opaque processes, similar risks are significantly increased by the increasing rates of simplified procurement due to the crisis, the significantly increased volume of financial assistance received from international partners, and more. Additionally, the cases discussed during the monitoring when the results of a separate anti-crisis program are presented by the government in a way that helps the public to create excessive perceptions about the success of the program can be considered one of the manifestations of opaqueness.

Although the Anti-Crisis Plan developed by the Georgian government alleviated the problems caused by the pandemic to the population and businesses, IDFI believes that the issues raised in the report related to program planning, distribution of direct assistance according to social needs, and other optimal solutions could be improved to increase efficiency.

According to the monitoring results carried out by IDFI, we call on the Georgian authorities to:

- Procuring entities should minimize the use of simplified procurement in the procurement of services and products that are known in advance and can be planned and conducted on a competitive basis.

- The State Procurement Agency should take into account IDFI recommendations regarding the placement of data in the electronic system in an open, processable format, control over the reference to SMP codes for urgently required simplified procurement, etc.

- The Audit Office should take into account suspicious circumstances identified during the monitoring of Covid-19 procurements.

- When implementing the 2021 Action Plan, the factors mentioned in the report on the planning and implementation of programs should be taken into account as much as possible, which will contribute to the effective growth of both the volume of aid and the target segment.

- Provide more targeted assistance to vulnerable groups with special financial and other needs under the Anti-Crisis Plan.

- Tighten the monitoring of the implementation of the projects to be implemented within the framework of foreign loans and grants according to the plan.

- Account for and take into consideration the best opportunities for spending administrative costs of the budget.

- Provide the public with realistic data on the scale and effectiveness of any program developed under the Anti-Crisis Plan, which would eliminate the possibility of creating false expectations for the beneficiaries of the program.