Challenges of the Georgian Bureaucratic System (2011-2016)

The policy document studies the development and challenges of the Georgian state bureaucracy in 2011-2016 and its administrative expenses, including labor remuneration, work visit, representation, state vehicle and telecommunication expenses.

Overall, in recent years, Georgia has had success in optimizing its system of state bureaucracy in terms of sate vehicle use, fuel consumption and number of public servants in central public institutions, however, significant challenges remain in terms of having a fair and balanced remuneration system, number of employees in state LEPLs and NNLEs and their duties, and rules for employing and remunerating supernumerary employees. Despite positive trends, the size of Georgia's state bureaucracy and the resources required to keep it running significantly exceed Georgia's economic capabilities and require further optimization.

The share of public sector employment in the total workforce has also been slightly decreasing, albeit with notable exceptions that raise questions about the optimal size of the bureaucratic apparatus. The biggest challenge in this regard is the number of public servants in state and municipal LEPLs and NNLEs which is unreasonably high and keeps increasing. For instance, the number persons employed by municipal NNLEs has doubled since 2011 to 51,828 employees in 2015. As a result, labor remuneration expenses of NNLEs have tripled since 2011 to GEL 179 million in 2015. Georgian legislation does not explicitly define the criteria for setting up such entities, which leads to duplication of authority. 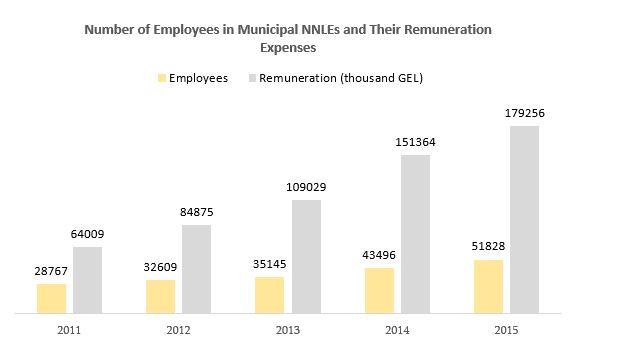 Wasteful spending due to lack of regulation and monitoring is also a significant problem. This problem manifests mostly in relation to the remuneration system, which is unbalanced and non-transparent, and riddled with the practice of issuing unreasonably high bonuses or salary supplements. Wasteful spending also applies to the purchase of luxury vehicles, and inadequately high representation and travel expenses in case of specific public institutions.

Over the past few years, the Georgian government has committed to optimizing administrative expenses by developing a new Law on Labor Remuneration and optimizing the state vehicle use. Unfortunately, the fulfillment of these commitments has been delayed considerably. For example, the draft law on labor remuneration was submitted to the Parliament one year after the deadline. Even though the new system of labor remuneration proposed through the draft law is important, it still has shortcomings in terms of its scope, unbalanced coefficient categories and the rule of granting bonuses and supplements to state political officials.

In 2016, two years after the launch of the state vehicle optimization process, a specially created commission had reviewed and approved optimization plans from only 5 Ministries. Even though restrictions imposed by the government on state vehicles in 2014 significantly reduced the number of high-cost vehicles being purchased by public institutions, the practice of free of charge transfer of vehicles from private to public entities remains outside of legal regulation and holds risk of wasteful spending and misuse of authority.

Introduction of a new mechanism for controlling fuel use, i.e. use of special chips to track the allocated limits, was an important step forward in terms of reducing bureaucratic expenses. However, the mechanism for monitoring unauthorized use of state vehicles, i.e. for personal purposes, remains weak. The British model of having a common state car park is a good example of a rational and efficient system, and would reduce the unauthorized use of state vehicles if introduced in Georgia.

The Georgian public service is undergoing a transition. Despite a number of important steps that were taken within the reform, its continuous monitoring and improvement remains essential.

Considering the country’s historic experience, it is especially important for the reform to create a public service where the possibility of nepotism, cronyism, corruption and bias are brought to a minimum; freedom from political influence must be guaranteed and a change of government must not influence the work of public servants.

In addition, considering Georgia’s economic hardships, its system of state bureaucracy must also be made efficient, which, on the one hand, will be able to pursue state goals and deliver services, while, on the other hand, will not become a barrier for economic development due to high maintenance cost.

We believe that the following recommendations will help the Georgian government to create a more efficient bureaucratic apparatus.

- The Georgian government must develop a separate strategy and action plan on the optimization of its bureaucratic apparatus.

- The legislation must define clear criteria for setting up state LEPLs and NNLEs, focusing on prevention of duplication of authority.

- Specific criteria must be introduced for when it is admissible to exceed the limit on the number of supernumerary employees, as well as their employment conditions and contract duration.

- The new Law on Labor Remuneration must be extended to apply to all budgetary institutions. A new provision must also be added to the law regulating the remuneration of the heads of state-owned enterprises.

- Remuneration coefficients of various public official positions determined by the new draft law on labor remuneration must be reviewed.

- The practice of issuing bonuses and salary supplements to state servants (Ministers, MPs, Chief Prosecutor, etc.) must be restricted completely. The “special occasion” for granting supplements must also be explicitly defined by the law. Finally, supplements must not be issued to supernumerary employees.

- Optimization of use of state vehicles must be accelerated and a reasonable timeframe must be determined for reviewing and approving optimization plans presented by budgetary institutions.

- The terms and conditions for free of charge transfer of vehicles to public institutions must be regulated by a Government Decree.

- The use of state vehicles must be brought to a minimum. The Government of Georgia should consider establishing a centralized state vehicle service, which will manage all state vehicles.

- A new technological mechanism must be introduced for controlling the unauthorized use of sate vehicles. The existing fuel consumption monitoring system must be extended to cover all public institutions, including local self-government.

- The Government of Georgia must develop common rules for managing representation expenses.

- Limits must be placed on the use of roaming services by public servants during out of country work visits.

See the visualizations reflecting the information in the policy document: