In the beginning of September 2019, the High Council of Justice provided a list of 20 Supreme Court Justice candidates to the Parliament of Georgia for approval. In September-November 2020 parliament conducted the hearing process for candidates, and on December 12th 2020 14 candidates were appointed to Supreme Court. The Georgian media covered the process extensively.

But, what does the public in Georgia know about the process of appointment of the Supreme Court Justices, and what is their attitude towards the newly appointed justices and judicial institutions? A phone survey conducted on January 30 - February 10, 2020 suggests that people in Georgia are divided between trusting and distrusting judicial institutions. While more than half of the public have heard about the Supreme Court appointment process, they have little trust in it, and largely have not heard of the new justices.

The majority of the Georgian speaking population (63%) reports that they have heard about the hearings in parliament for Supreme Court candidates, and more than half of the population (54%) says that they are aware of the outcomes of the hearings.  More than half (55%) of thosewho have heard about the appointments report that they do not trust the process. Similarly, more than half (53%)of the people who had heard of the process think that parliament carried out the appointment process unfairly. 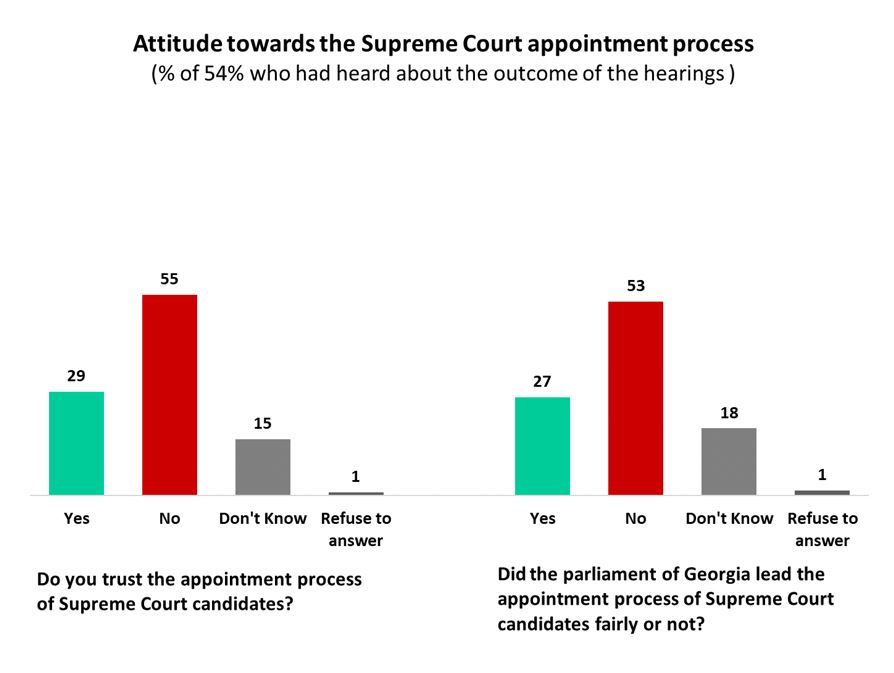 The survey asked respondents whether justice will improve, stay the same or get worse if the candidates were appointed as Supreme Court Justices. About one fourth of the adult Georgian speaking population (26%) reported that the appointment of the 14 candidates will improve justice in the country, the same share (26%) think that the state of justice will stay the same. About a fifth of the population (20%) believe it will get worse. The remainder either did not know or refused to answer the question. A similar question was asked on a September 2019 survey: “If these 20 candidates are appointed to the Supreme Court, do you think justice in Georgia will improve, stay the same or get worse?” The results have not changed substantively between waves of the survey, with a slight decline in the share responding don’t know and slight increase in the share responding it would have a positive impact. 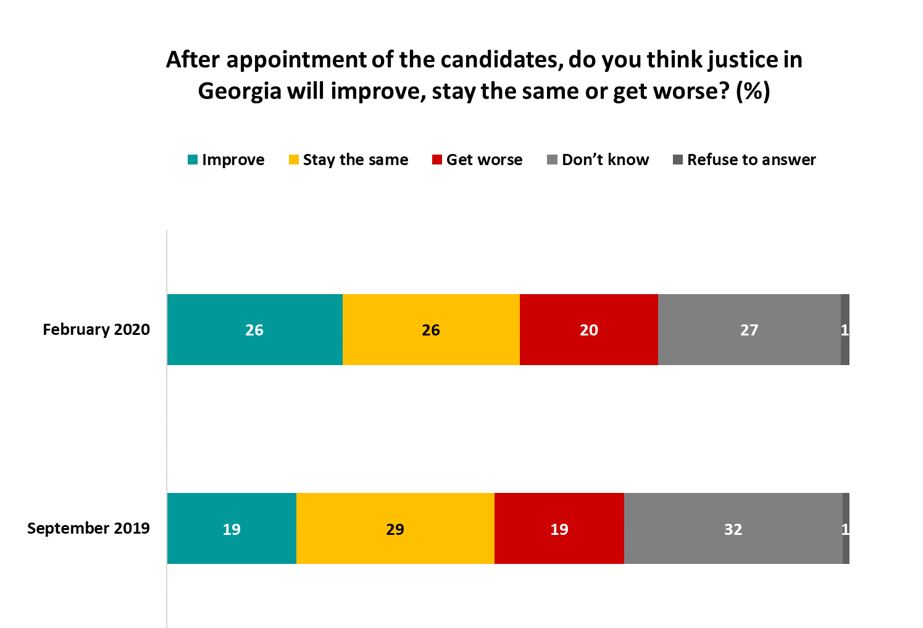 The survey asked the respondents who were aware of the appointment process to share their first association about it. Almost one third (32%) did not provided any association, responding don’t know. The top five associations included “Unfairness” (14%), “Distrust” (14%), “Biased” (5%), “Fight” (5%), and “Open process” (4%). Overall, 11% reported a positive association, while 53% reported a negative one. One percent of responses were neutral. Two percent of population refused to answer the question.

The survey asked about whether each candidate should or should not be appointed to the Supreme Court. Most people had not heard about the candidates.  Approximately one tenth of the population approved of the appointments of Nino Kadagidze (11%), Giorgi Mikautadze, (11%), and Shalva Tadumadze (10%). All other candidates had lower levels of approval. 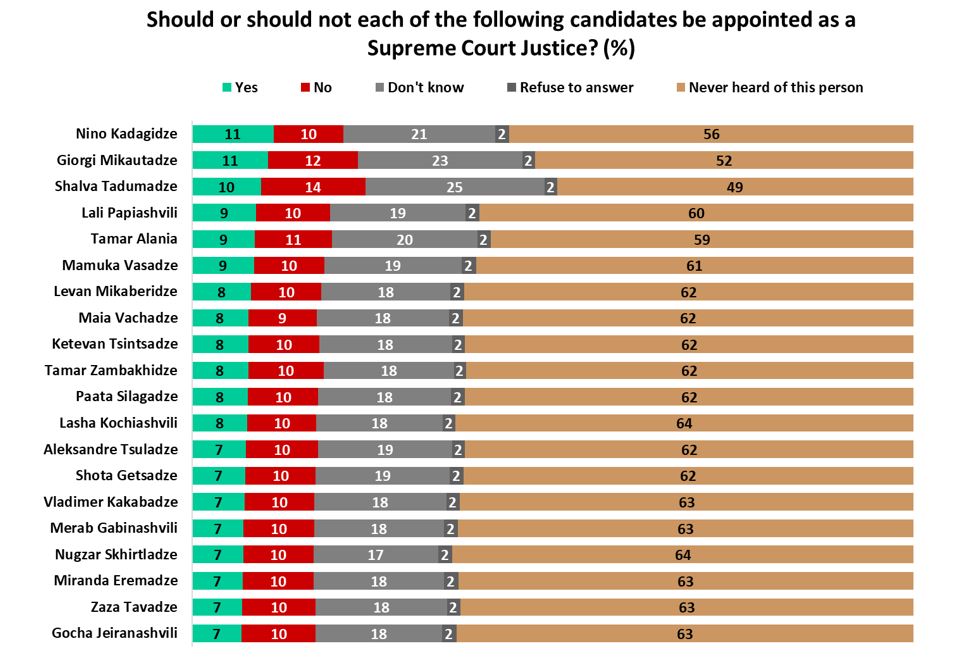 Respondents were asked to name the most important events of the Autumn/Winter, 2019-2020, but were allowed to name up to 3 events. Only 3% of Georgian-speaking adult population named the appointment process of Supreme Court justices.The most commonly named events were the protests in response to the failure to pass a proportional electoral system (13%), Dr. Vaja Gaprindashvili’s abduction (10%), and the mass arrests of the aforementioned rally participants (10%). Half of respondents (49%) could not identify a most important event during the period.

Thepublic is divided in whether they trust the High Council of Justice, Supreme Court, and the court system in general. The chart below shows that about half of the public trusts and distrusts each of these institutions. This result has not changed since September, when the same questions were asked on another survey. 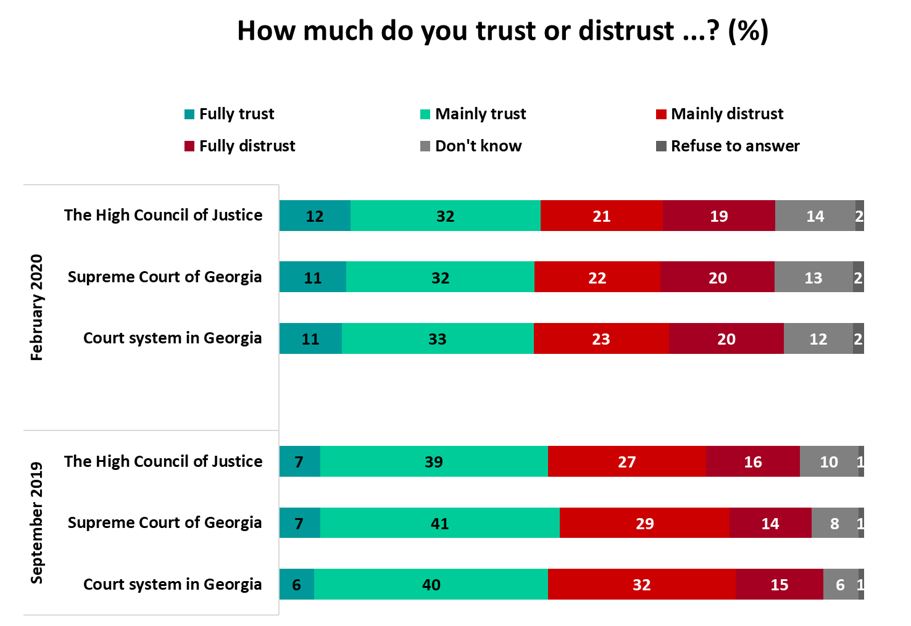 On January 30- February10, 2020, within the EU-funded project “Facilitating Implementation of Reforms in the Judiciary (FAIR)”, CRRC-Georgia conducted a phone survey to understand people’s knowledge of and attitudes towards the Supreme Court  appointment process. The survey resulted in 766 completed interviews, and is representative of the adult Georgian-speaking population of the country. The theoretical margin of error of the survey is 3.5% for estimates near 50%, 3.1% for estimates near 75% and 25%, and 2.1% for estimates near 10% and 90%.