In the times when the world is fighting coronavirus pandemic, conspiracy theories about the links between coronavirus and 5G technology have become widespread in social media. Such theories are being spread by nonreliable sources as well as celebrities: singer Keri Hilson, singer M.I.A, boxer Amir Khan, TV host Amanda Holden, actor Woody Harelson and others. However, researchers also mention that there is a trace of coordinated disinformation campaign in the conspiracy theories about 5G technology.

Theories that 5G technology causes different health complications have been circulating in informational space since 2016. First, such opinions appeared on Forums and YouTube. However, soon the sources such as Infowars, American ultra-right website, and RT, TV network funded by the Russian government, started spreading the same news. RT actively promoted an idea that 5G could become a global catastrophe as long as it causes cancer in humans and animals. 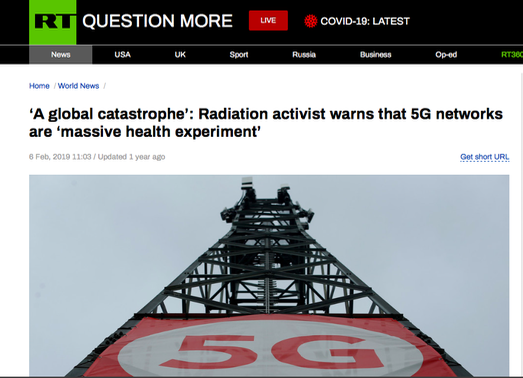 Since 2019, RT became especially active in spreading conspiracy theories about 5G. In January 2019, a video was published on YouTube in which a correspondent of RT, Michelle Grinstein argued that 5G technology could kill humans. This video has more than 2 million views. After January 2019, Grinstein made similar report on RT at least 10 times.  In April 2019, the same RT argued that 5G causes cancer in children. Although RT has not linked 5G technology to coronavirus directly, the conspiracy theories spread by it for years, presumably aimed at hindering technological progress of the West, created a fertile basis for making the conspiracy theories about coronavirus a part of the same narrative.

In 2020, after the flare-up of coronavirus pandemic, specific groups started linking coronavirus with 5G technology. First, the Belgian newspaper Het Laatste Nieuwspublished an interview with doctor Kris Van Kerckhoven, in which he associated 5G with coronavirus and said that it was dangerous. His comment was soon spread by the anti-5G activists and sources. In a few days, the same information appeared in English-language media, YouTube and Facebook. Basic six directions can be emphasized in these conspiracy theories:

- 5G is dangerous in general

- 5G weakens immune system and complicates the symptoms of coronavirus

- Bill Gates is involved in the development of 5G and coronavirus

- The situation around 5G and coronavirus is a Mason conspiracy.

Since April 2020, researchers of disinformation started mentioning that there is trace of coordinated disinformation campaign while researching the above-mentioned narratives. Marc Owen Jones, a researcher of Qatar Hamad Bin Khalifa University, analyzed 22,000 twits on Twitter that contained words “5G” and “corona”. According to him, it was possible to identify hundreds of accounts on social media that are mentioned in inauthentic behavior which raises doubts that they are managed centrally. Also, according to Jones, the tendency monitored regarding these posts is very similar to the activities of the Internet Research Agency of Russia, the trace of which was identified in the disinformation campaign during the 2016 US elections.

Due to the widespread conspiracy theories, there were attacks on 5G masts in many countries. In UK, up to 80 masts were burnt. Also, 5G masts were attacked in New Zeland, Netherlands, Cyprus, Belgium, Italy, Sweden and Finland. There was a case in North Ossetia as well, where according to a representative of communications company, locals have burnt down their mast after which the village was left without the Internet. As he mentioned, the authors of this vandal act do not believe in coronavirus and say that 5G was invented for “coding” people.

Blackbird.AI, a company based in New York, which studies disinformation, also sees the signs of coordinated disinformation campaign. They have studies 50,000 posts on Twitter and Reddit based on which they say that inauthentic behavior of users is evident. Global Disinformation Index, non-governmental organization, researching online disinformation, argues the same. However, they do not specify the states, groups or individuals standing behind these campaigns.

Conspiracy Theories about 5G and Georgia

Conspiracy theories about the links between coronavirus pandemic and 5G technology are also being actively spread in Georgia by specific disinformation sources and groups. Such content has been shared by the following sources: iTv.ge, geomediatv.ge, wnews.ge, pirveli.site, Facebook page „dedakalaki“, that spread the information about the links between coronavirus and 5G based on Lali Moroshkina’s Facebook post. 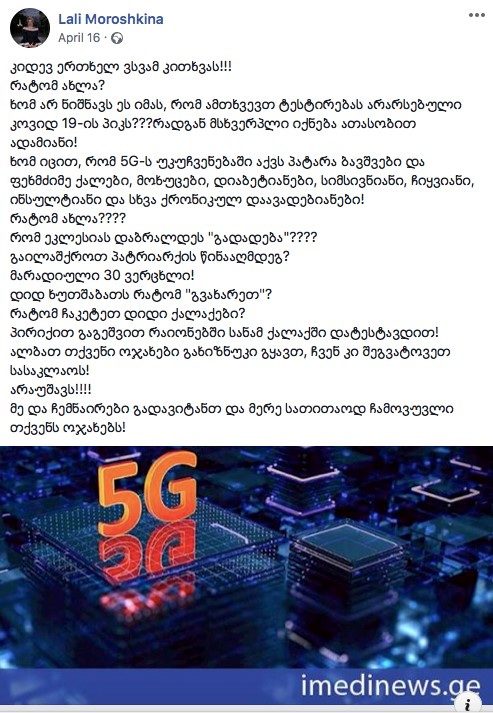 However, the coordinated efforts aimed at the Georgian audience is more significant than the disinformation spread by separate individuals or sources. In this regard, the Facebook group STOP 5G GEORGIA attracts attention. Currently, more than 21,000 people are in this group which is not a small number for Georgia. Also, there is another group named „შევაჩეროთ 5G საქართველოში“(Stop 5G in Georgia), which has more than 6,000 members.

“Regarding the 5G system and biological effects of radioactive rays, numerous studies have been carried out worldwide by independent researchers.

Scientists’ final conclusion is as follows: 5G technology is a tool for government, control, spying and management of artificial intelligence. Due to its characteristics, its installment will cause irreparable damage to ecosystem and human health on cellular level.

Society has protested the installment of masts with street demonstration in many countries while in some countries, people have directly demolished them.

Technological progress is always welcomed but not at a cost of human health.

As long as taking care of the health of society is the government’s responsibility, we call: Stop the installment of the above-mentioned technology in Georgia immediately!”

Based on the analysis of the information spread in both of the groups, it can be said that in Georgia, several conspiracy theories related to 5G technology dominate:

- 5G is a tool for mass control

Besides different types of inauthentic materials and conspiracy theories, information from the sources, that have been mentioned to spread disinformation before, is being actively shared in these groups. Such sources are, for instance, tvalsazrisi.ge, geoworld,ge, that actively share the disinformation related to the Russian Federation, Sputnik and RT. 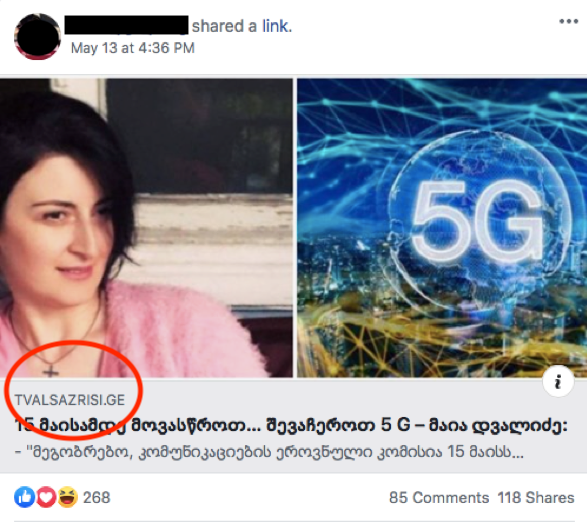 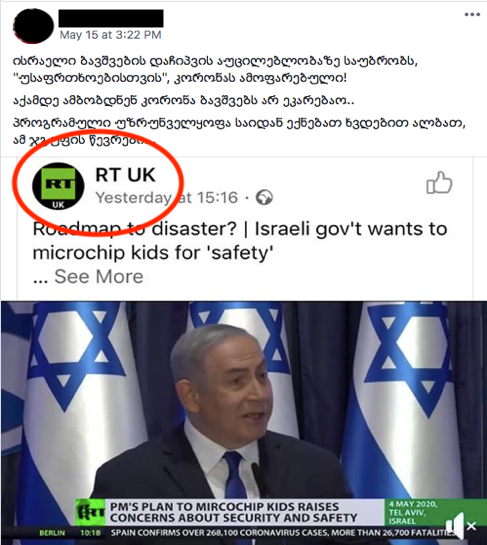 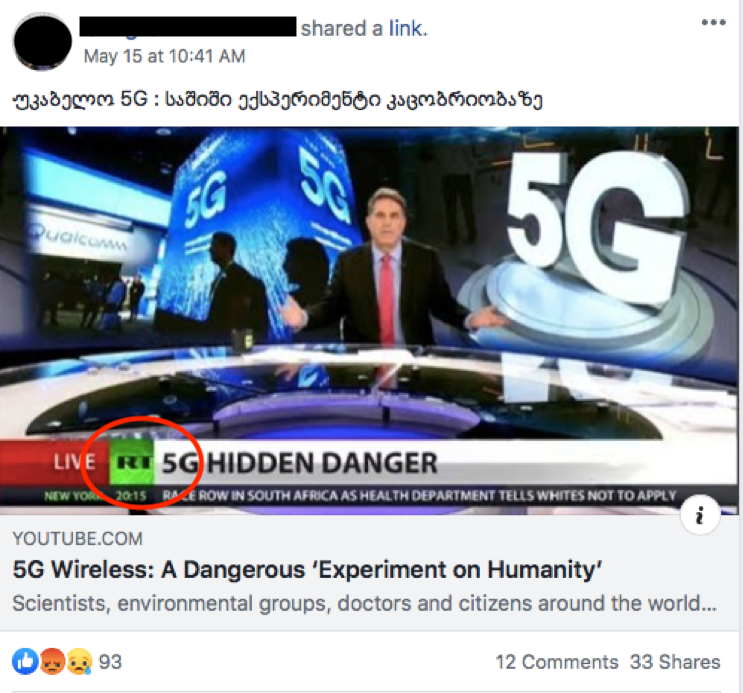 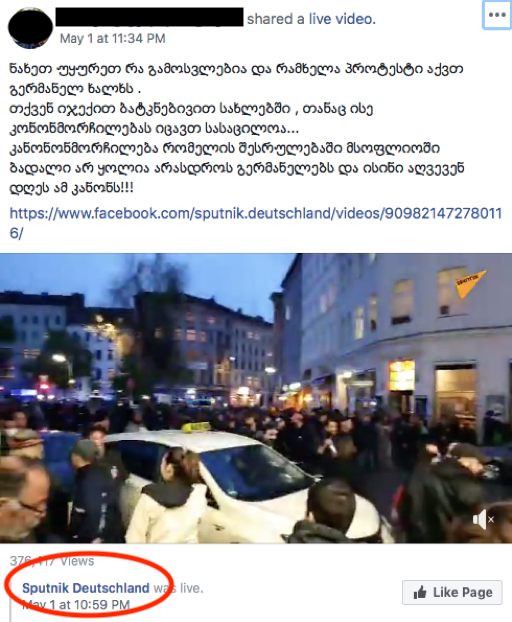 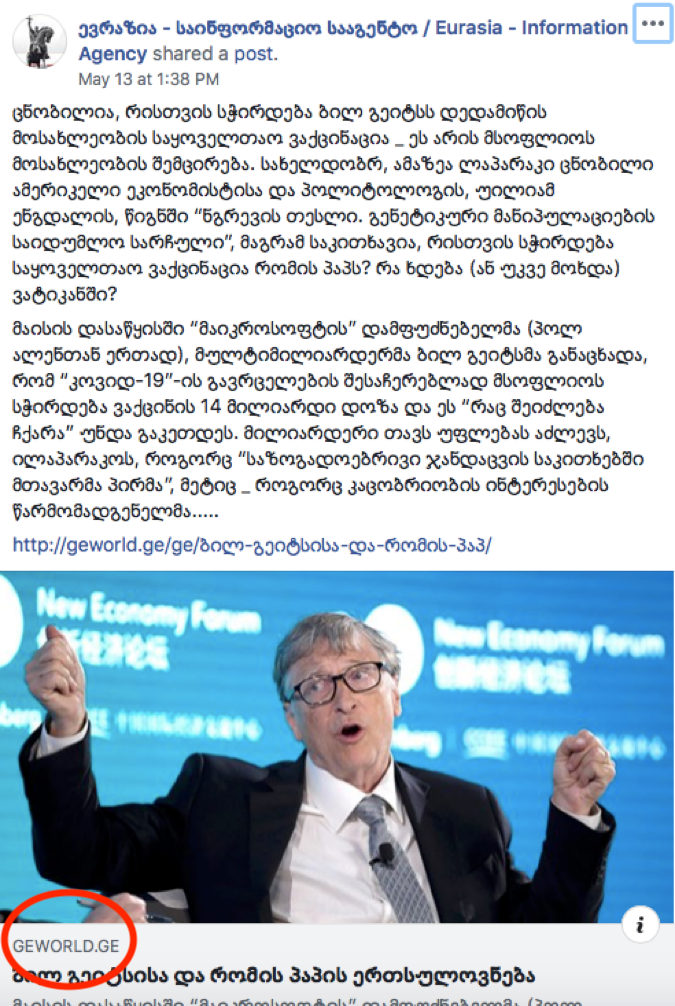 In the groups, one can also find posts that link 5G to coronavirus. With regard to this, basically, the opinion that the coronavirus pandemic, universal testing and restrictions are being used by the governments for imposing mass control and installing 5G masts which would be challenged otherwise, dominates. To great extent, this narrative matches the conspiracy theory about 5G and coronavirus spread worldwide.

In fact, 5G is a fifth generation of wireless contact technology which is used by smartphones and other mobile devices for connecting the Internet. Similarly to 4G LTE and 3G, 5G is spread through radio waves, that do not exceed electromagnetic spectrum which is safe for humans. Although the 5G disinformation sources claim that the radiation of radio waves is dangerous for human health, 5G radio waves are non-ionizing. Therefore, they cannot damage human cells and cause any illness, for instance – coronavirus. None of the authoritative studies give any reason for doubt that 5G technology can be a threat to human health.

However, during the ongoing COVID-19 pandemic, disinformation campaigns are noteworthy since they can sow distrust toward decision-makers and public health organizations in the society, which then can become a threat to human health and life. Moreover, the disinformation campaign related to 5G technology also deserves particular attention because the spread of such conspiracy theories can, on the one hand, facilitate anti-Western attitudes in the society and, on the other hand, enhance skepticism toward technological progress. For this, it is of paramount importance the society to be provided with the full and comprehensive, fact-based information related to health issues as well as technological innovations that are to be implemented in the country. In this way, the scale of mistrust toward decision-makers and polarization in the society will be diminished, which will simplify the attempts against such challenges as coronavirus and enhance technological progress.