Bertelsmann Transformation Index (BTI)[1] regularly evaluates countries since 2004. The index analyzes and evaluates whether and how developing countries and countries in transition are steering social change toward democracy and a market economy (reports are published once in two years). Experts assess with a 10 point system (1 – the lowest score;10 – the highest score) the extent to which 17 criteria developed through BTI have been met for each country. Finally, the results are aggregated into two indices: The Status Index and Governance Index. The Status Index assesses democracy and a social market economy status in the country, whereas the Governance Index evaluates the quality of political leadership. The present analysis reviews the results of the Governance Index and focuses on the areas of public governance and Anti-Corruption.

Governance index studies how eﬀectively policymakers facilitate and steer development and transformation processes. By examining and evaluating decision-makers’ reform policies, the BTI sheds light on those factors determining success and failure on the way to democracy and a market economy. In 2022[2] Georgia ranks 38th among 137 countries with the score 5.55 that is worsened compared to 2020, when the country ranked 36th with 5.83 points. Georgia recorded the lowest score in the governance index in 2012 (5.38), and the highest - in 2008 (6.36). 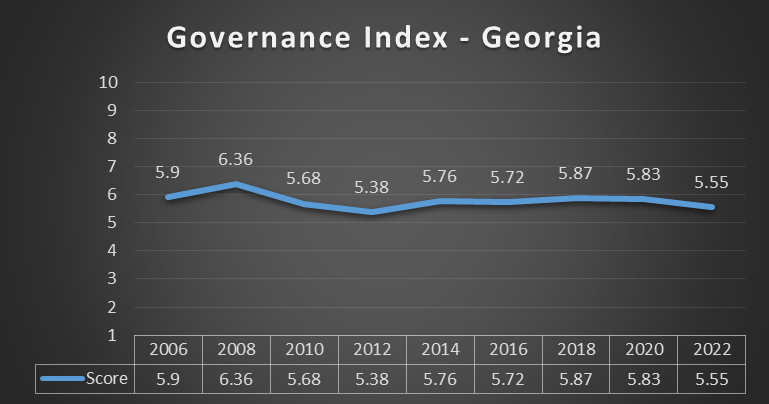 The Governance Index is comprised of five criteria, which are based on a total of 20 indicators. These criteria are the following:

Level of Difficulty[3] – assesses severe structural constraints on governance capacity. The criterion is assessed based on indicators such as structural constraints; civil society traditions; social, ethnic and religious conflict intensity; GNI p.c. Atlas method, UN education index, BTI stateness and rule of law indicators. By 2022, this criterion has deteriorated by 0.2 points compared to 2020 and is evaluated with five points. Georgia received the best evaluation in this direction in 2016-2020 (4.8), and the worst - in 2010 (6.0). 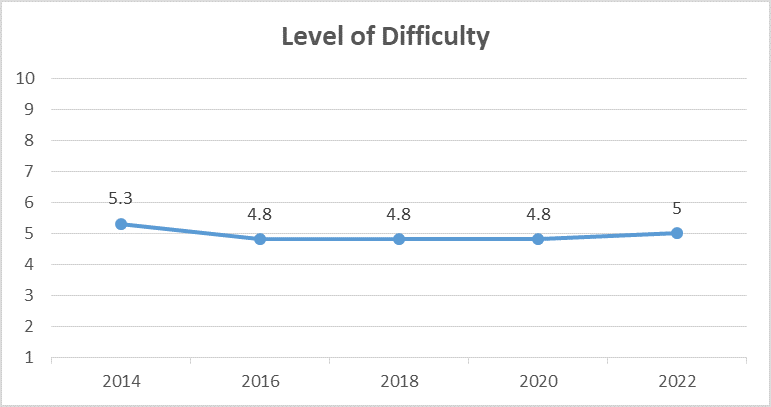 The report indicates that the divide between Georgia’s political elite and the public more broadly, a legacy of the country’s Soviet Union past, has yet to be overcome and without civil society involvement state institutions will not be able to overcome their lack of trust. Participatory approaches that promote political dialogue are rare. Civil society organizations themselves still have not extended their limited outreach across the population in Georgia. The report also indicates that democratic institutions are a policy tool in the hands of political elites. It is stated that an alarming strengthening of ultra-nationalist movement has been detected in last two years. This movement is positioning itself as a social and political force against all “non-Georgian” elements (i.e., religious, ethnic, racial and sexual minorities) and does not avoid violence.

Steering Capability – assesses whether reforms are managed effectively and political priorities are maintained. Criterion assessment is focused on to what extent does the government set and maintain strategic priorities; how effective is the government in implementing its own policies; how innovative and flexible is the government. The report shares the results of the alternative monitoring of IDFI and GYLA in connection with the incomplete implementation of the Public Administration Reform Action Plan for 2019 – 2020. It also indicates that only a third of all short-term (two years) recommendations from a 2018 SIGMA report have been implemented. The report states that significant challenges remain for policy planning and coordination and the “operational gap” in proper implementation of reforms has not yet been closed. Frequent staff rotation, lack of institutional memory, and lack of horizontal coordination between state agencies, as well as profound deficiencies in evidence-based policy formulation have affected the government’s implementation capacities. According to the report policy monitoring in Georgia is weak and practically no policy evaluation occurs. The policy planning process is generally of only a formalistic nature – a proper situation analysis, risk assessment and mitigation tools are rarely or only superficially conducted. Even though, public consultations in the policy planning process became mandatory by government decree in 2020, only minimalistic standards have been set. In 2022, Georgia is evaluated with 5.7 out of 10 points in this criterion, which is worsened by 0.3 points compared to 2020. The country received the highest score in this regard in 2008 (7.3), the lowest 5.7 points in 2012, 2016 and 2022. 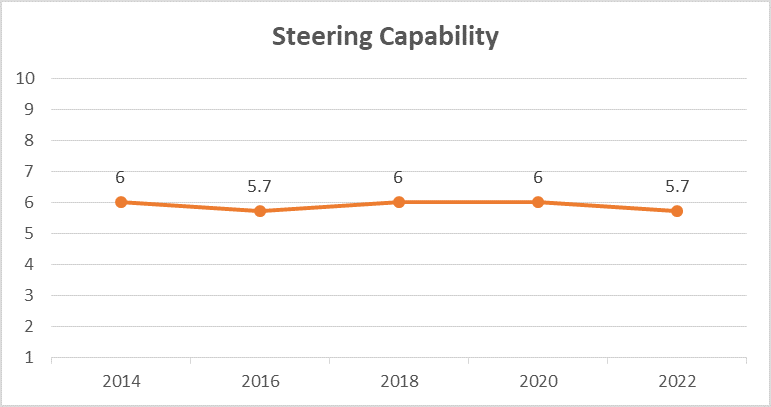 Resource Efficiency – assesses whether the government makes optimal use of available resources. Criterion assessment focuses on to what extent does the government make efficient use of available human, financial and organizational resources; to what extent can the government coordinate conflicting objectives into a coherent policy; to what extent does the government successfully contain corruption. According to the report despite some changes the relevance of policy coordination to the Georgian government in everyday practice remains weak. Even though Georgia continues to be a frontrunner in the post-Soviet area several alarming trends of potential backsliding from previous achievements are identified. Georgia has succeeded in fighting petty corruption, but high-level corruption in the country remains a problem. The concentration of power, informal influence on public institutions, and state capture evidently prevented proper investigations into possible cases of high- level corruption. Simultaneously, the enforcement of the existing anticorruption norms remains problematic. The report states that  the government has not established an independent and impartial Anti-Corruption Agency as demanded by CSOs. Implementation of recommendations issued by international organizations is characterized by low progress. The report shares  the findings of IDFI's study on the legislative challenges to the whistleblower institution and notes that the political will to support the effectiveness of the whistleblowing mechanism appears to be lacking. Resource efficiency criterion is evaluated with 6.3 points that is worsened by 0.4 points compared to 2020. The country received the highest score in this regard in 2008 (7.0), the lowest 5.7 points in 2006. 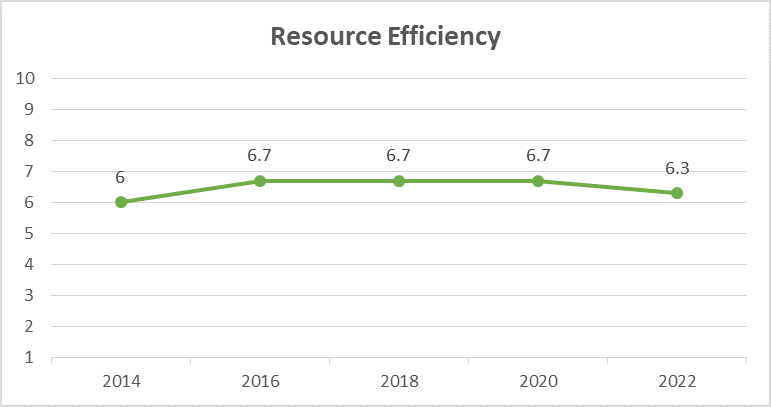 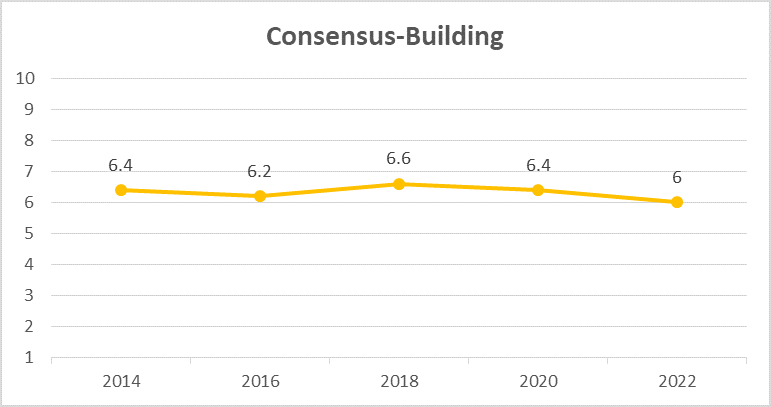 According to the report, while there is general agreement regarding the basic principles of a market economy, there is little consensus on policy goals. This is largely due to the negative perception of neoliberal policies among the population. The report indicates the emergence of right-wing extremist groups in the country (e.g. the Georgian March) and other anti-democratic actors, but notes that their chances of getting into parliament are little. Simultaneously, the ability of the political elite to solve conflicts remains limited. No substantial progress has been achieved with regard to reconciliation with the separatist regions of Abkhazia and South Ossetia, widely perceived as instruments of Russian geopolitical manipulation. The polarization between the Georgian Dream and the United National Movement has intensified since the presidential election, and there is still an insufficient tradition and culture of dialogue and negotiation. The report notes the particularly reduced level of cooperation or consultation with civil society by the ruling party and government since the 2016 parliamentary elections. In addition, because of their relatively weak roots in society, NGOs are simply populist targets for ruling politicians.

International Cooperation – assesses whether leaders willingly cooperate with regional and international actors. The assessment focuses on to what extent does the political leadership use the support of international partners to implement a long-term strategy of development; to what extent does the government act as a credible and reliable partner in its relations with the international community; to what extent is the political leadership willing and able to cooperate with neighboring countries. Georgia has 7 points in this criterion, which is worsened by 0.3 points compared to 2020. Georgia recorded the highest score in this direction in 2008 (7.7), and the lowest in 2010-2012 (6.7). 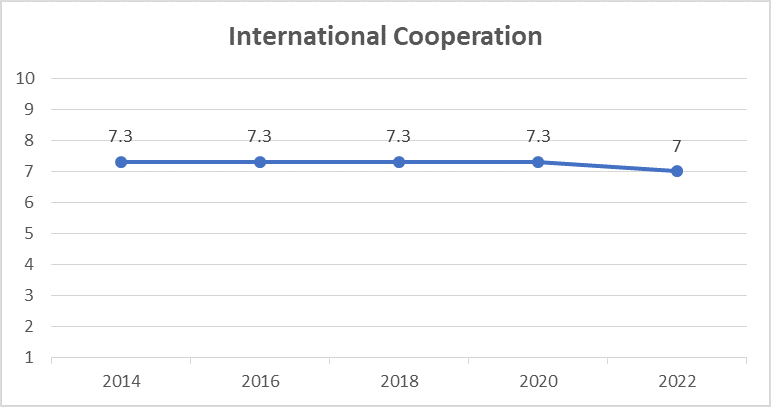 At the same time, at the Biden Administration's first Democracy Summit on December 9-10, 2021, in which states pledged to strengthen democracy, including through the fight against corruption, Georgia made no commitment to fight corruption. Countries such as Canada, Croatia, Finland, the United Kingdom and others have made anticorruption commitments. As for Georgia, its statement says nothing about anticorruption and public administration reforms. This practice clearly indicates that the fight against corruption and effective anticorruption policy in the country is no longer a priority, which is also confirmed by Georgia's inactivity at the UNCAC conference, where the country failed to present anything.

IDFI once again calls the authorities to pay more attention to the Public Administration Reform and the fight against corruption; to renew the functioning of the Anti-Corruption Council; to adhere to the recommendations of international Anti-Corruption institutions; to develop effective policy documents in a timely manner and undertake ambitious commitments to make actual changes.

[1] The author of this project is the Bertelsmann Foundation - a large, non-profit organization based in Germany, which was founded in 1977 to strengthen the public engagement in political, cultural, and economic activities.

[3] Level of difficulty is one of the criteria of the governance index. Its rating on a 10-point system is the opposite - 10 the lowest rating, 1 – the highest ratings. The Governance Index is aggregated by calculating the average of scores given for the governance performance criteria, which is then oﬀset against the assigned level of diﬃculty. See additional information at the link: https://bti-project.org/fileadmin/api/content/en/downloads/codebooks/BTI%20Technical%20Notes.pdf.