Within the framework of monitoring conducted by IDFI in 2010-2016, a total of 37 582 Freedom of Information (FOI) requests were sent to public institutions, and 30 729 replies were received.

The statistics compiled by IDFI over the course of 6 years shows that the number of replies given by public institutions to FOI requests has been steadily increasing. Therefore, the data received by IDFI has been increasing too. This data is available on a web-pate (www.opendata.ge) created in 2010, which allows visitors to get more information about issues of their interest.

It should be noted that the dynamics of comparison between sent requests and received replies often varied. In particular, only 44% of replies were received to the requests sent in 2010. In the framework of the project of 2011 the indicator increased to 76%, and in the period starting from October 2011 up to March 2012 it decreased to 68%. 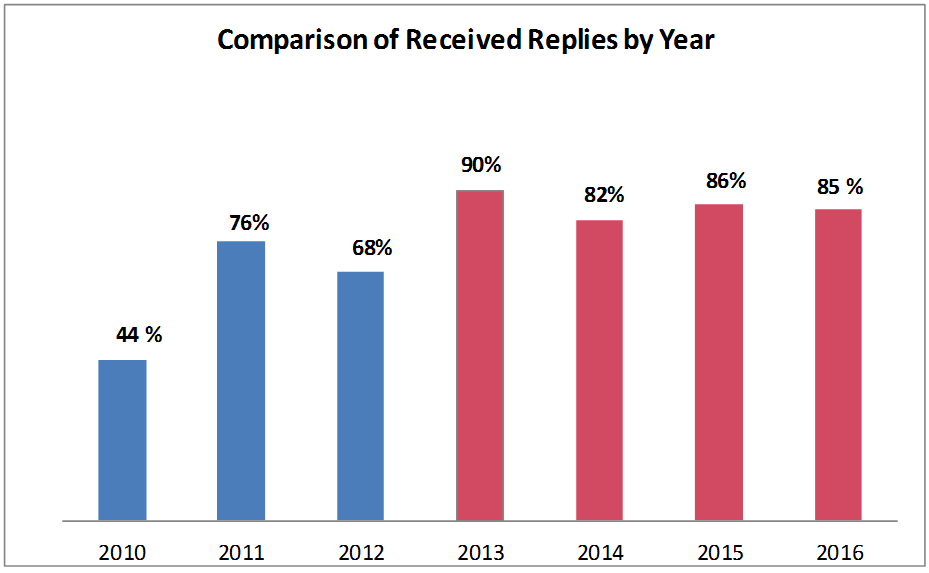 The data provided on the diagrams below does not include the replies stating that requested document was not kept at the entity or no proper action had been implemented by a public institution.

Access to public information is greatly influenced by the elections of both central and local governments, as well as the attitudes of heads of specific public institutions towards open and accountable governance. Our data shows that access to public information increased for a brief period following each election in 2010-2016, but decreased subsequently to the point where in 2016 a fifth of all freedom of information requests remained unanswered, and some public institutions went from being highly transparent to completely closed.

In addition to the Ministry of Justice and its 12 subordinate bodies, 14 other public institutions left without an answer all of IDFI’s freedom of information requests in 2016.

IDFI’s court practice has revealed that following problems regarding access to public information in Georgia:

I. Refusal to disclosure court decisions on cases of high-level public officials – Common Courts in Georgia refuse to disclose their decision on cases of high public interest, such as that of the former President. This practice does not fall in line with the principle of openness of court hearings guaranteed by the Georgian Constitution. The courts do not employ the balance test between private and public interests and choose to base their arguments solely on personal data protection.

III. Refusal to disclose information that may include tax secrets – Public bodies refuse to disclose any information, including information that is supposed to be public by its nature, related to taxpayers entities based on the argument of protecting tax secrets. In this context, the decision made by Tbilisi City Court in the case of IDFI v. Revenue Service is precedential.

The court practice shows that Georgia does not have effective mechanisms of ensuring access to public information. The Georgian government committed to elaborate a new Law on Freedom of Information and mechanisms to ensure access to public information within the framework of various strategies and actions plans, including: the 2015-2016 National Anti-Corruption Strategy of Georgia and Action Plan, 2014-2015 Human Rights Protection Action Plan, 2014-2015 Open Government Partnership Georgia Action Plan, and the Association Agreement between Georgia and the EU. Despite the above commitments, to this day the Georgian government has yet to start elaborating the new Law on Freedom of Information.