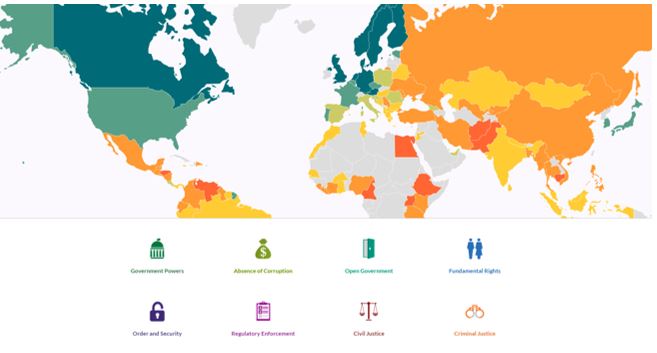 The goal of the comparative analysis prepared by IDFI is to review the results of Georgia from 2012 to-date based on the data provided by the World Justice Project, ascertain progress or lack thereof in certain directions and compare the result of Georgia to Eastern European and Central Asian countries.

The World Justice Project Rule of Law Index is one of the world’s most comprehensive databases aimed at assessing the rule of law in different countries around the global. The World Justice Project is an independent, multidisciplinary organization based in Washington DC, working to advance the rule of law around the world. Since 2010, the organization publishes its Rule of Law Index. Georgia was first evaluated in 2012.

- Based on the global Rule of Law Index of 2017-2018, the state of rule of law in Georgia is evaluated with the score of 0.61 (maximum score 1). With this score Georgia occupies the 38th place among 113 countries included in the index. The rating of Georgia has decreased by four positions compared to the previous year.

- Among the eight factors covered by the Rule of Law Index, Georgia scored the highest in the factors of Order and Security and Absence of Corruption in 2017-2018.

- Civil and Criminal Justice is the most problematic direction in Georgia.

- Compared to previous years, in 2017-2018 Georgia scored the lowest in the factors of Absence of Corruption, Regulatory Enforcement, Civil and Criminal Justice.

- In the factor of Order and Security, the position of Georgia on the regional scale fell from the first to the third place. Global ranking of Georgia declined by 17 positions compared to 2014.

- In terms of Fundamental Rights, the most problematic directions in Georgia are freedom from arbitrary interference with privacy, labor rights and rule of law.

-  In 2017-2018, the state of Fundamental Rights considerably decreased in Georgia and fell to the level observed in 2012-2013. The ranking of Georgia has decreased by 7 positions on the global scale and by one position on the regional scale.

- Proactive publication of information is evaluated to be one of the most problematic directions in the factor of Open Government. In 2017-2018, open governance in Georgia has improved compared to 2012-2013 but has worsened compared to 2015-2016.

-  The sub-factors of non-governmental checks and independent auditing were evaluated with the highest scores within the factor of Constraints on Government.

- The sub-factor of sanctioning government officials for misconduct was evaluated with the lowest score within the same factor.

- Georgia was evaluated with the highest scores in terms of Restraints on Government Powers in 2015 and 2016. However, this result has considerably worsened based on the evaluation of 2017-2018. The ranking of Georgia fell by 16 positions on the global scale.

- Improper government influence and unreasonable delays in the process of adjudication were observed to be highly problematic in the directions of Civil and Criminal Justice. In both factors Georgia was evaluated with the lowest scores compared to the evaluations of previous years.