Worldwide Governance Indicators (WGI) constitute a research database based on over 30 data sources reflecting the views and evaluations stemming from citizens, entrepreneurs and experts. These data come from rankings and assessments stemming from surveying representatives of research institutions, CSOs, international organizations, as well as the private sector. New aggregate indicators – WGI and relevant global ranking, are constructed by combining the results of mentioned assessments and databases. WGI ranking covers 214 countries worldwide. The ranking was established in 1999 by the World Bank Institute, the Development Research Group of the World Bank and the Brooking Institution.

The purpose of this analytical document is to introduce Georgia’s rankings to public, detect strong and weak sides of Georgia’s development, highlight achieved progress and compare Georgia’s results with those of European countries.

Georgia obtained the highest assessment in World Governance Indicators in 2013-2014. Prior to this date indicators demonstrated steady and rapid development of Georgia. During this period especially noticeable was Georgia’s progress in the areas of Rule of Law and Control of Corruption.

According to the World Bank, the pace of the county’s development significantly slowed down. According to the latest assessment of the World Bank, Georgia has advanced in the area of Government Effectiveness, however, regress was detected in all of the rest five directions. In addition, Georgia was able to return to 2014 results in 2018 in the area of control of corruption and in 2019 its score reduced again. The lowest score among six directions for Georgia has always been the for the political stability area. 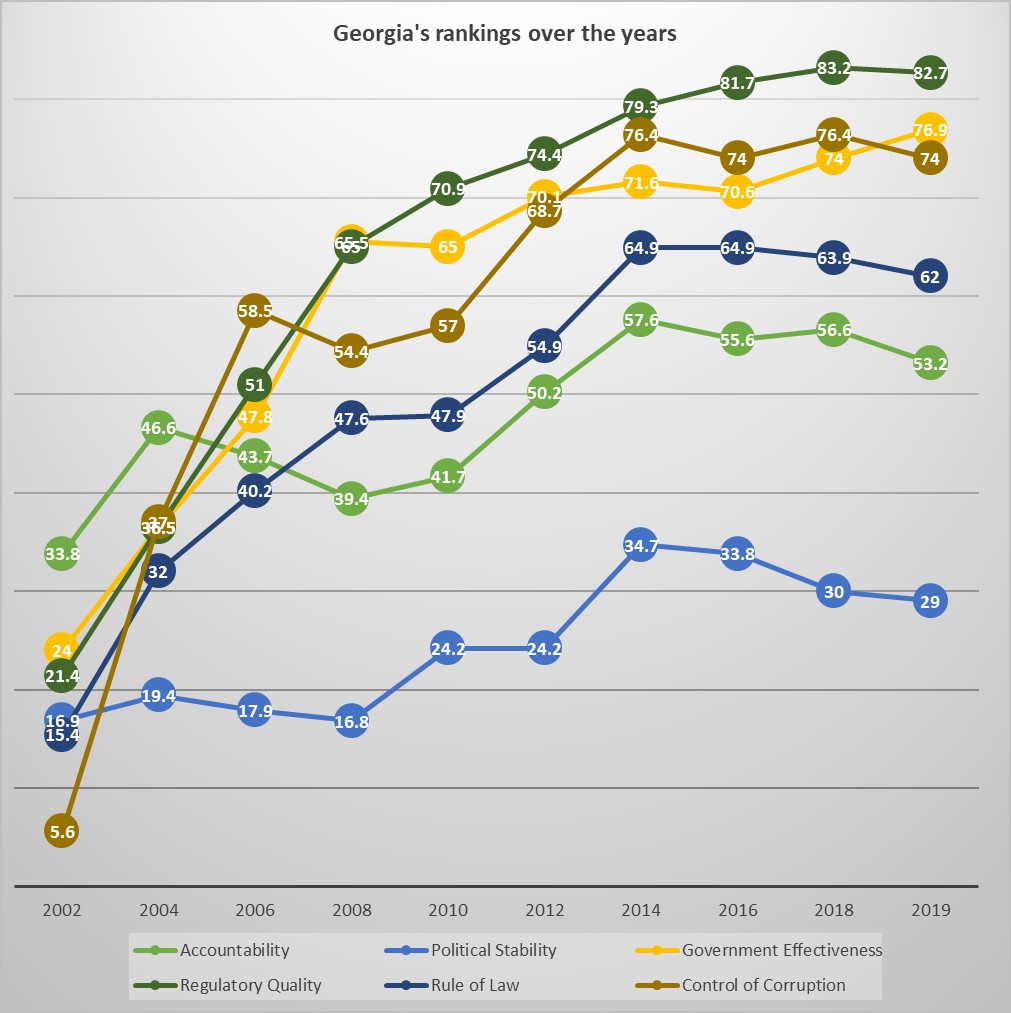 This direction captures the extent to which a country’s citizens are able to participate in selecting their government, freedom of expression, freedom of association and free media.

The evaluation of Georgia in the indicator of Voice and Accountability is only slightly higher than the half of the maximum possible score – 53, which is the lower than that of last year and still below the results shown in 2014-2015.

Notwithstanding the worsened results in the area of Voice and Accountability, Georgia is still a leader among the Eastern Partnership (EaP) countries (Armenia, Azerbaijan, Moldova, Belorussia and Ukraine), however, it is on the last place among the European Union countries.

Political Stability and Absence of Violence

Captures the likelihood that the government will be destabilized or overthrown by unconstitutional or violent means, including politically-motivated violence and terrorism.

Regardless of the fact that Georgia has never received a high score in the indicator of Political Stability, the evaluation further worsened in 2019 and reached only 29.

In the Area of Political Stability Belorussia is a leader among EaP countries, while Georgia is on the third place after Moldova. Among EU countries, Georgia is on the last place in terms of political stability and has a significantly lower score than Greece taking place before Georgia.

Georgia’s Government effectiveness has been scored 76.9 that is the highest score obtained by Georgia over years in this direction.

In the area of Government effectiveness Georgia’s score is much higher than of the Eap countries’. As for the EU countries Georgia ranks higher than eight of them: Slovak Republic, Poland, Hungary, Italy, Croatia, Greece, Bulgaria and Romania.

In this direction the ability of the government to formulate and implement regulations that permit and promote private sector development is assessed.

Georgia has obtained the highest score in regulatory quality (82.7) out of six areas assessed, however this score is lower than it was in 2018.

The commitment of Georgia to initiate and implement reforms promoting private sector development received one of the highest score which makes Georgia a leader among EaP countries. As for the EU countries, Georgia is on the 15th place mong them.

This area captures the perceptions of the ability of the government to formulate and implement regulations that permit and promote private sector development.

According to the assessment, Georgia’s performance in the area of rule of law significantly improved in 2013 - 2014, however, the situation in this area has been worsening since then. Although in 2018 assessment of rule of law in Georgia became a little more positive, however, in 2019 it worsened again and the score is lower than it was in 2014.

Georgia is a leader among EaP countries in the area of rule of law, however, the country is deteriorating its own achievements. Among EU countries Georgia’s score is higher than those of Italy, Greece and Bulgaria but is much lower than most of the countries’ scores.

This area captures the perception of both petty and elite forms of corruption and of the extent to which public power is exercised for private gain.

Control of corruption is on the third place put of six directions assesses in 2019 in Georgia – regulatory quality and government effectiveness on the first two places. On 2019 the ranking of Georgia in this direction worsened compared to 2018 (as well as compared to 2014) and went down to the result shown in 2016.

Georgia is a leader among EaP countries in terms of controlling corruption and is on the 15th place among EU countries showing a better result than the countries such as Czech Republic, Slovakia, Poland, Italy, Latvia, Croatia and others.

Over the years Georgia has shown significant progress in all of the six areas of World Governance indicators. Especially interesting is the road that Georgia has went in terms of fighting corruption.

However, unfortunately, pace of country’s development slowed down since 2014. In most of the areas Georgia has been unable to keep up with the high standards shown in 2014.

Georgia’s scores are still very low in the areas of accountability and political stability while the regress is detected in five out of six areas in the recent years.

For the purposes of ensuring continuous development of democratic governance in Georgia and bringing it closer to the EU countries, it is crucial to emphasize achieved progress and at the same time internalize the problems identified by the Worldwide Governance Indicators. We hope that the government will take appropriate measures and implement effective reforms that will ensure Georgia’s rapid development and be reflected in the future assessments of Governance Indicators by the World Bank.

[1]Data sources of World Governance indicators are available on this link: http://info.worldbank.org/governance/wgi/Home/downLoadFile?fileName=Table1.pdf.