As part of the research, IDFI requested public information from about 80 public institutions (Legal Entities of Public Law under the Ministries and other independent authorities) about the number of vehicles owned by them, fuel limit regulations, and fuel consumption expenditures for 2018-2019. FOI request also included data regarding the distances driven by public officials and the exact amount of consumed fuel. IDFI received data from only 65 public institutions in the scope of this study.

- The majority of the vehicles assigned to public officials are high performance vehicles, in particular, 74 out of 133 (56.4%).

- On June 27, 2019, the Roads Department of Georgia purchased a Toyota Land Cruiser for GEL 151,574.4 for the Chairman of the department. This amount exceeds the limit set by the Government Decree by GEL 10,000.

- The determined fuel limits for public officials range from 140 liters to 850 liters. The Director of the National Veterans Affairs Agency stands out with the highest fuel limit.

-  In 2019, determined fuel limits were exceeded by up to the 20 public officials studied.

- The Director of the Legal Aid Service has increased his own fuel limit four times in a year, from 275 liters to 600 liters. 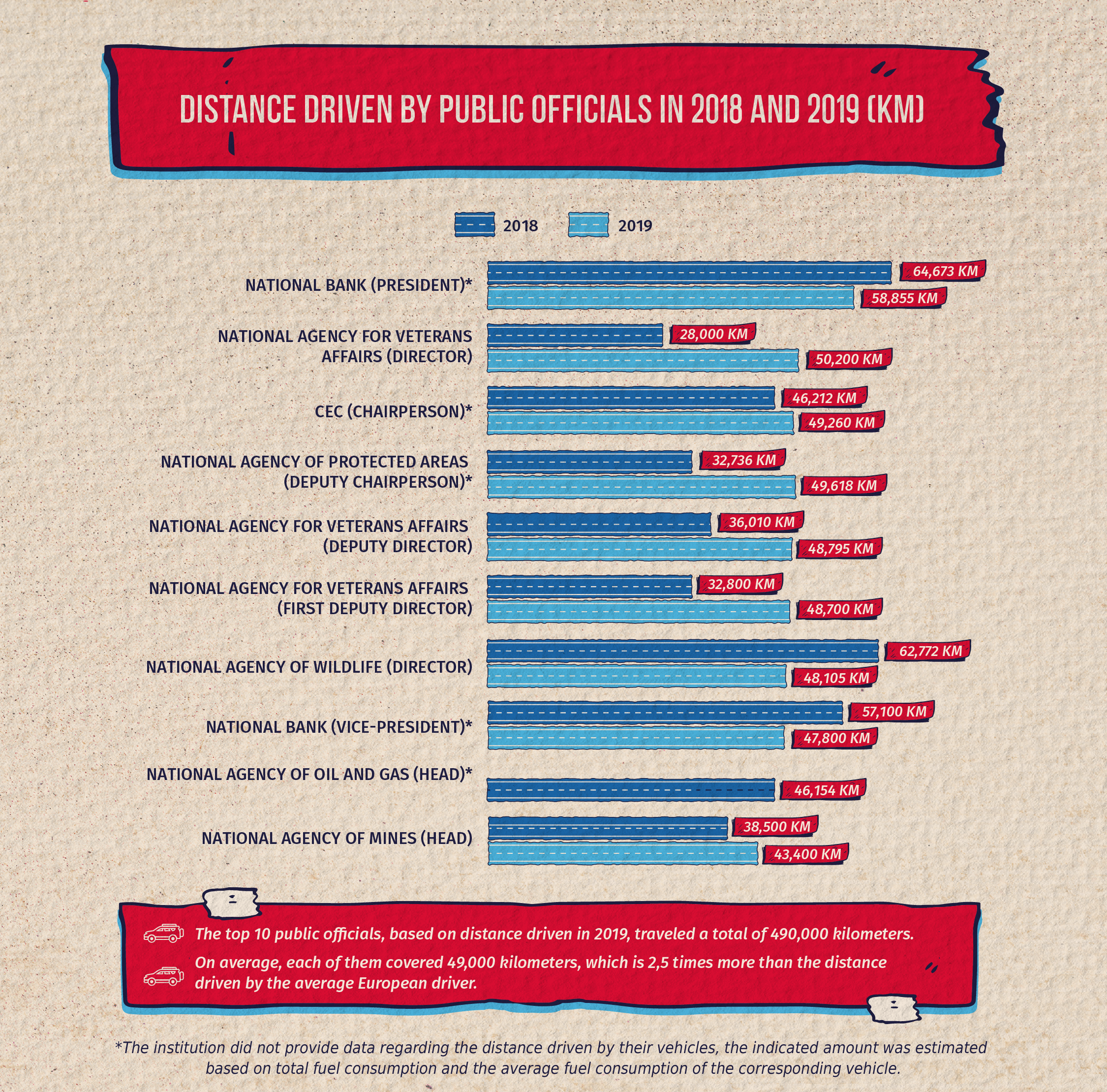 In 2018-2019, the analysis of vehicles owned by LEPLs and other independent public institutions and their fuel costs clearly demonstrated the challenges associated with its rational administration. In particular:

- The overall number of vehicles, the prevalence of high performance and expensive vehicles, and the current fuel consumption rate explicitly indicate a necessity for optimization and stricter oversight mechanisms.

- A significant number of LEPLs refrained from disclosure of information about the amount of vehicles and and fuel consumed. Therefore, it can be assumed that these public institutions have more serious challenges regarding rational management of vehicles than those showcased in this study.

- None of the examined public institutions are using electric cars, with the exception of the Land Transport Agency owning 5 Mitsubishi I-Mievs, received as a donation. This tendency is due to the Government Decree N121, which contains specific procurement specifications, disallowing the purchase of alternate energy vehicles (example: Hybrid and electric vehicles).

The existing practice of managing vehicles and fuel consumption in public institutions once again points to the necessity of establishing a centralized service for state-owned vehicles, which will supervise the management of all vehicles owned by public institutions.

Relevant amendments should be made to the Government Decree N121, which will ensure integration of eco-friendly, efficient and safe vehicles into the system.

You can find the infographic here