Statistics of Cutting Down Trees in Tbilisi Due to Constructions

The number of trees that were cut down in Tbilisi for being damaged had increased at least five times in 2016 compared to previous years, even though the total number of removed trees had remained unchanged.

This finding raises questions about the integrity of the process of examining trees and declaring them to be damaged by the City Hall. In the summer of 2016, civil society organizations already discovered a case of alleged violation in this regard.

In summer 2016, Institute for Development of Freedom of Information (IDFI) requested Tbilisi City Hall to disclose information on the construction of residential and commercial buildings, permits issued for cutting down trees, income generated from such permits, and unlawfully removed trees.

According to Tbilisi Architectural Service, in 2011-2016 (until 28 August) 1,747 permits were issued to build residential apartments and multifunctional buildings. 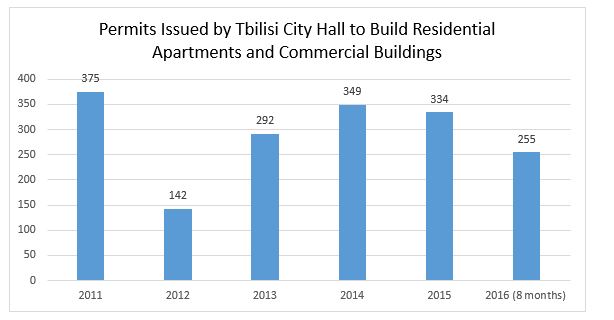 Permits to Cut Down Trees

As a response to IDFI’s request to disclose information about trees removed for construction purposes, instead of providing aggregate data, Tbilisi City Hall decided to send copies of individual permits that were issued by the Ecology Department in 2011-2016. Moreover, according to City Hall, it was unable to locate a part of the documentation from 2011-2012 in the database. 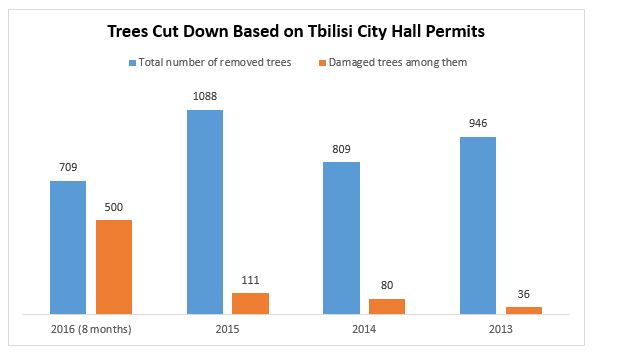 Unfortunately, in some cases, the copies of the permits provided by Tbilisi City Hall did not contain information about the reasons for allowing the removal of trees. Therefore, it is impossible to say exactly how many trees were removed due to construction.

For example, on August 2, 2016, a company called Orbi Group Tbilisi Ltd. was permitted to cut down 44 and transplant 4 trees from its property on Kazbegi street. The permit does not specify the purpose for this action. However, since Orbi Group is a construction company, it can be assumed that this purpose was construction.

Tbilisi City Hall received total income of GEL 1,947,282 from granting permits to remove trees in the period between 2011 and 2016:

Tbilisi City Hall provided information on unlawfully removed trees only for the period of 2014-2016. Like in the pervious case, IDFI could not identify the exact number of trees removed due to construction.

The Georgian legislation determines the rules of compensation for damaged or destroyed trees. The sum is calculated according to the tree’s annual growth rings. For instance, each annual growth ring of an especially valuable coniferous tree costs GEL 100; GEL 50 in case of a deciduous tree. For more common tree species the cost ranges from GEL 8 to 12. For smaller plants like bushes the cost is calculated based on the plant’s diameter.

According to Article 151 of Administrative Offences Code of Georgia:

“1. Damage and/or unauthorized cutting of green plantings on lands owned by a self-governing unit, or damage of landscape strips shall carry a fine of GEL 500, with confiscation of the object of the offence.

2. The same act committed repeatedly shall carry a fine of GEL 1,000, with confiscation of the object of the offence.”

The regulation extends over plants on private property as well. According to the December 12, 2014 decree of Tbilisi City Council, “the owner of the land is obligated to care, protect, and nurture the growth and development plants on its territory”.

Moreover, the removal or relocation of plants on private property also requires permission and notification of Tbilisi City Hall.

Integrity of the Process of Examining Trees

Considering the fact that in 2016, compared to other years, the proportion of damaged trees in the total number of removed trees increased at least five times, one has to question the integrity of the process of examining trees for damage.

For example, the removal of trees at Kazbegi 22 in summer 2016 was followed by a big public outcry. Civils society organizations (CSO) claimed that healthy trees were removed and questioned the validity of the conclusion made by the City Hall which declared them to be damaged. On August 19, the Prosecutor’s Office opened a criminal investigation under Article 303 of the Criminal Code, which includes fine, up to one year public work, and up to three years of imprisonment for unlawfully cutting down or damaging plants. The investigation is still ongoing.

NGOs believe that it is necessary to specify the procedure and the responsible body for assessing trees further, because there is no control mechanism for how thoroughly the trees are being examined.

Risks Associated with the Legislative Proposal

On December 15, 2016, construction company m2 appealed to the Parliament to remove, in expedited manner, the regulation requiring payment of compensation for cutting damaged trees. The legislative proposal was introduced in the Parliament removing the obligation to compensate damages to biodiversity. Interestingly, according to the documentation sent to IDFI, in 2014-2016 m2 requested permission from Tbilisi City Hall to remove 94 trees, out of which only 4 were damaged.

IDFI believes that the above legislative proposal contains several risks:

1) Construction companies could deliberately damage trees on their territory, in order to avoid paying fees.

2) The income generated by issuing tree-cutting permits would significantly decrease. In the first 8 months of 2016, the income from permits amounted to GEL 666,778. 70 % of that sum was payed to cut down damaged tree.

3) The risk of corruption in the Tbilisi City Hall will increase in the process of determining which tree is damaged.

[1] The term construction is used to imply not only building of residential apartments, but also of roads and other infrastructural modifications.

Other Publications on This Issue
Cutting Trees Due to Construction in Tbilisi Statistics  |   11 January 2017
Public Information Database - Opendata.ge  |   7 August 2015