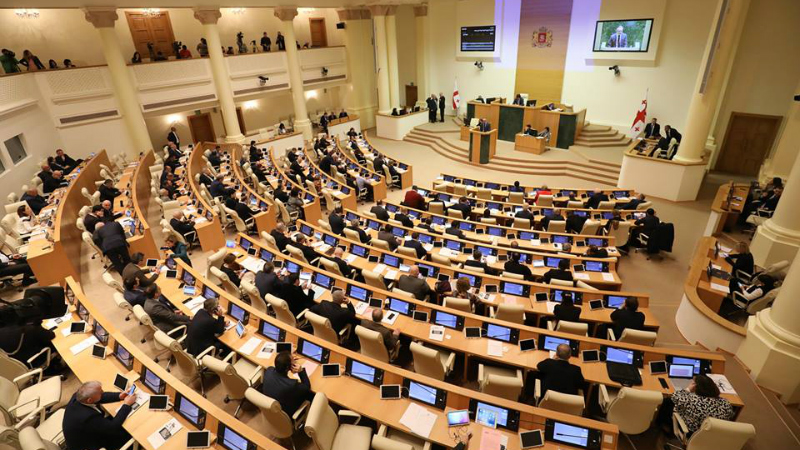 On May 29th, 2019 Open Governance Permanent Parliamentary Council (the Council) created a thematic inquiry working group (the Working Group) for studying existing practice and legislation of citizen participation in the process of public policy development in Georgia.

Through the parliamentary oversight mechanism, the Council aimed to study the process of participatory decision-making at the executive branch of governance - ministries and the Government Administration (AoG), ascertain existing challenges and develop relevant recommendations.

The Working Group was created on the initiative of Irina Pruidze – Chairperson of the Council and with the financial support of the United National Development Program (UNDP). The members of the Working Group were: Irina Oruidze (the Speaker), Guguli Magradze, Giorgi Kakhiani, Otar Kakhidze, Emzar Kvitsiani and Giorgi Khatidze.

Institute for Development of Freedom of Information (IDFI) was actively involved in the process as a member organization of the advisory consultative working group created under the Council.

The Working Group conducted hearings with the representatives of ministries and AoG and received information on the practice of citizen participation in the decision-making process and relevant regulations. The Working Group studied existing legislation and the best international practice on the topic. After analyzing the information received during the thematic inquiry the Working Group prepared the final report, which includes the main findings and relevant recommendations based on the best international practice.

The Speaker of the Working Group Irina Priodze presented the Thematic Inquiry Report and relevant recommendations to the Parliament of Georgia during the plenary session held on February 19th, 2020.

The following main findings on existing practice and applicable legislation included in the Thematic Inquiry Report should be highlighted:

-  Georgian legislation does not include legal obligations directing public institutions to ensure citizen participation at early stages of policy-development, i.e. when deciding on the necessity of elaborating a policy document and/or when determining its main directions;

- The regulations on citizen participation at the later stages of policy development (after the first draft of the document is already elaborated by state entities) are scattered around various laws and sub-laws and fail to set a uniform standard of participatory decision making.

- Georgian legislation includes regulations on citizen participation in the budgetary process mainly at the level of the legislative branch. Regulations on the topic applicable to the executive branch are scarce at the central as well as local (self-governance) levels.

- There are examples of relevant stakeholder participation in the process of developing particular policies, however, the practice varies significantly across the ministries, as well as across different policy documents elaborated within a single ministry.

- Ministries often confuse the concept of citizen participation in informing the public about newly adopted regulations. During the hearings aiming at ascertaining the practice of participatory decision-making at the ministries the representatives of the state institutions mainly described their practice of informing the wider public about the new policy documents already adopted. In these cases informing the public aims at enabling policy implementation and does not meet even the lowest standards of participatory decision-making.

One of the main recommendations of the thematic inquiry was developing a common standard of citizen participation in the process of public policy development, which would be mandatory to follow from the early stages of policy development, that is, i.e. when taking decisions on the necessity of elaborating a policy document and/or when determining its main directions.

Several months after completion of the thematic inquiry, on December 20th, 2019 the Government of Georgia adopted the Decree on the Rules of Development, Monitoring and Evaluation of Public Policy Documents. Among the other topics, the decree includes the description of public policy development stages and the regulations of ensuring the participation of relevant stakeholders in the process. The rules will come into force from January 1st, 2021. Even though the document should be seen as a positive step forward, it does not reflect high standards of citizen participation. Namely, the rules only set it mandatory to ensure citizen participation in policy development after the draft of a policy document is elaborated, while at relatively early stages the said only has a voluntary character.

The recommendation included in the Final Report of the Thematic Inquiry can be summed up as given below:

- Training relevant ministry representatives on the standards and procedures of participatory decision-making and on the process of reporting to AoG on the activities carried out with this purpose.

- Building a website for consultations (based on the standards of the EU/the European Commission), which will enable anyone interested to access information on completed and ongoing consultations. The website should include information on the subject of each consultation, its short description, the goal of consultations, the target audience and the process of receiving comments/feedback from interested parties.

- Developing a database of relevant stakeholders in order to ensure direct consultations with citizen unions, business associations, CSOs and any other interested parties. The database should be published on the website of public consultations and be proactively updated. Anyone interested should be able to apply for adding their contact information to the database based on their area of interest and expertise.

- Preparing guidelines with the aim of ensuring citizen participation in the process of state budget development.

Based on the Rules of Procedure of the Parliament of Georgia the recommendations developed as a result of a thematic inquiry are sent to relevant public entities, after which the Parliament of Georgia oversees the process of implementing the recommendations. IDFI hopes that the recommendations developed by the thematic inquiry Working Group will be taken into consideration as a result of which initial steps will be taken in the direction of increasing meaningful citizen participation in the process of public policy development in Georgia.

IDFI expresses its gratitude towards the Open Governance Permanent Parliamentary Council for initiating the thematic inquiry and towards UNDP for supporting the initiative.

In order to study the practice of citizen participation in the policy development process, the Working Group conducted hearings with the representatives of central government entities as well as CSOs. The timeline of the hearings was as follows:

October 8, 2019 – Hearing of public entities representatives (Administration of the Government of Georgia, Ministry of Environmental Protection and Agriculture, Ministry of Justice.