The research conducted by IDFI is about the general and current issues of the contest announced by the government of Georgia within the scopes of the special program, broadband internet cover in Georgia in order to increase indicator of Internet Concentration. Out of submitted proposals, none of them fulfilled the established conditions. The Ministry of Economic and Sustainable Development of Georgia and the LEPL “Georgia’s Innovation and Technology Agency” (GITA) work on modification of these conditions and opening of this contest.

On January of 2015 by the initiative of Georgian government the plan- “Broadband Internet to Every Citizen” was elaborated and published. According to plan, it was scheduled to cover Georgia with high speed internet in 2020, to which it open access would be provided to all stakeholders. According to mentioned plan, population of Georgia have to have high speed internet 30Mb/s, and 50 % of the population must be ensured by the 100 Mb/s speed of internet.

Ensuring the mentioned task must be the long-term plan and joint goal for the state’s government, public and business sector.

According to author, conditions submitted for creating the competition provisions made by the Ministry of Economic and Sustainability of Georgia and the framework was not adjusted to the Georgian reality and current ecosystem. It’s essential to define right orient adjusted to the Georgian reality and to form the exact possibilities and interests of every contributor and interested party.

The last 7 month after announcing the project by the Ministry of Economy and Sustainability of Georgia and the contest results revealed that the process was inaccurate, fragmental and planed too fast and the result was adequate. This damaged on the first place the customer and then the business sector and state, because the process of beginning covering country by broadband network was postponed for one year.

The main problem regarding the building of high speed network in areas which are less commercially interesting is connected to financial issues and states aid and participation in this process.

According to IDFI research, it is clear that covering whole Georgia in high quality broadband and low expenses is impossible project without partnership of public and private sector, but the plan has to be created considering all risks which existed during creation of this kind of plans in Georgia and other countries. Process should not be planned in one month period and information has to be open and transparent before creation of strategy.

According to author, forming of Georgia’s broadband strategy must be made by passing following stages: 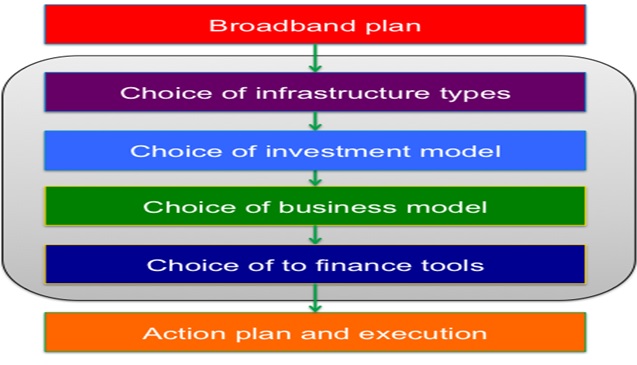 Special legal act of the European Union establishes specific regulation to incentivize networks.These regulations represents some possibilities for states, as the helping alternative, that is accordingly considered with EU association agreement article 107 . The state must plan this process according to this document.

IDFI offers 10 recommendations for successful planning and development of the project “Georgia’s Broadband Development” to the Ministry of Economy and Sustainability of Georgia and LEPL Georgia’s Innovation and Technology Agency” :

• Government of Georgia must create the joint committee, members of which will be tasked to submit Georgia’s broadband strategy and it’s realizations plan within the 3 months.
• Georgia’s broadband development strategy must include the long-term plans for the development directions which are interesting for all state organizations and private sector.
• The long-term Broadband Development Strategy Plan has to be created based on the analysis of existing situation which will analyze the problems connected with network and supply in all spheres of Georgian economy, but the problems and challenges of small and medium business and end-users, regardless the difficulty of problems and challenges.
• The plan and the strategy must be prepared in short-term, middle-term and long-term period.
• The relevant responsible body should be defined for each direction and quarterly public reports regarding the performance of plans and works should be prepared.
• Georgia’s Broadband development program shall reflect all requests from ministries and state organizations and their 6-7 year views, for their internal use and for the electronic service established in their areas.
• The plan must be elaborated by presenting consultation document in open and closed groups for discussion (In accordance with states and commercial secrets.)
• Commercial sector, all related state organs, civil society and all stakeholders must be involved in the process.
• Plan adopted by the state must be incompliance with EU association agreement and with DCFTA, with EU directives and experience of world leading countries.
• The process must be open and transparent and every consideration and proposal must be represented on special internet page, where every documents plan, projects and its terms will uploaded.