On 10 November, it became known that on 17-18 November, the US Secretary of State, Mike Pompeo would visit Georgia. Since then, lots of opinions regarding the objectives of his visit have been expressed. The statement of the US Embassy states that during his meetings with the President, Prime Minister and the Minister of Foreign Affairs of Georgia, the US Secretary of State will express his support toward the sovereignty and territorial integrity of Georgia and will call for the further development of democratic reforms. He will also meet the Catholicos-Patriarch of Georgia, Ilia II. It is said in the statement of the Ministry of the Foreign Affairs of Georgia that during the meetings, the priority directions and perspectives of enhancing future collaboration in the spheres of self-defense, security, trade, economics, democracy, relations between the peoples, education and culture will be discussed. Also, according to the Ministry of the Foreign Affairs of Georgia, the security environment in Georgia and the region, the collaboration between the countries for enhancing the security and democratic and economic reforms will be discussed. Later, it also became known that Pompeo would meet the representatives of civil society in Georgia.

Besides the official statements of Georgia and the USA, the discussions regarding the objectives of the Secretary of State’s visit have intensified. This has been linked, on the one hand, with the Parliamentary Elections of Georgia and the tensions surrounding it and, on the other hand, with the recent development in the South Caucasus, Nagorno-Karabakh in particular. It is notable that since the Prime Minister of Armenia, Nikol Pashinyan signed the agreement with the presidents of Russia and Azerbaijan, Vladimir Putin and Ilham Aliyev, to end the conflict in Nagorno-Karabakh, additional Russian “peacekeepers” have been deployed there, which significantly affects the geopolitical environment in the region. Therefore, the assumption that Pompeo’s visit might be linked with the recent developments in the region is facilitated by these processes and is very popular in the Georgian information space.

IDFI’s observation on the Georgian internet space during the last month reveals that the usage of the Georgian words “Pompeo” and “Georgia” has intensified since 10 November. Between 10-15 November, the combination of these two words was used approximately 200 times more than during the previous week. Only on 11 November, these two words can be found in 255 sources. Also, IDFI’s research showed that the Georgian-language information about this topic was mostly spread on Facebook and then on the news websites. 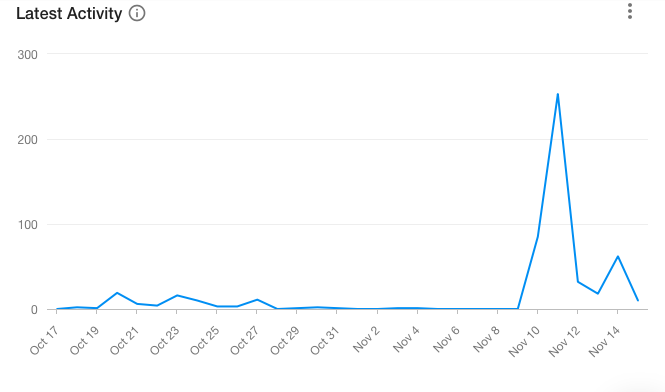 The frequency of the usage of words “Pompeo” and “Georgia” in the Georgian-language internet space between 17 October and 15 November.

The frequency of the usage of words “Pompeo” and “Georgia” in the Georgian-language internet space between 17 October and 15 November according to the platforms.

Similar observation on the Russian information space revealed interesting tendencies. Since 10 November, the frequency of the usage of the words “Pompeo” (Помпео)and “Georgia” (Грузия) has intensified. Between 10-15 November, the combination of these two words was used in 267 Russian-language sources, which is approximately 21 times more than that of the previous week. Only on 11 November, these two words can be found in 76 Russian-language sources and on 12 November – in 73 sources. As for the platforms, unlike Georgia, the combination of these two words in the Russian internet space can mostly be found on news websites, then on blogs and then on Facebook.

The frequency of the usage of words “Pompeo” (Помпео) and “Georgia” (Грузия) in the Russian-language internet space between 17 October and 15 November. 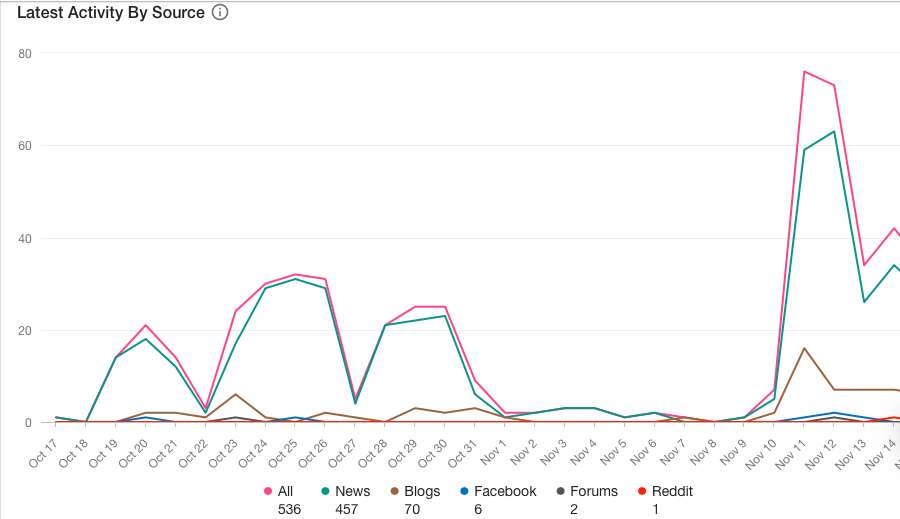 The frequency of the usage of words “Pompeo” (Помпео) and “Georgia” (Грузия) in the Georgian-language internet space between 17 October and 15 November according to the platforms.

As for the Russian sources, it is notable that, as IDFI’s observation has shown, the information and assumptions that the Secretary of State is arriving in Georgia to announce the opening of the US military base dominated the Russian information space. As the Russian sources report, the USA is planning to take this step as a response to the placement of the Russian “peacekeepers” and strengthening of Russia’s positions in the South Caucasus. It should be mentioned that this information is spread not by well-known Russian sources, affiliated with the Kremlin (e.g. Russia Today, Sputnik, etc.), but by the lesser-known information portals and agencies, the origins and connections of which are vague: Красная Весна, Новости Регионов, Redtram, RUPOSTERS, Livejournal, ModsCheats, Постсовет, Rusevik, Новое Время, Взгляд. Most of them indicate Georgian media, particularly – the article titled “Some Experts Predict the Announcement of the US Military Base in Georgia– Pompeo’s Unexpected Visit” in the newspaper Rezonansi as a major source of this information. However, the majority of Russian sources represent this assumption as a fact. Some of them even state that the US is planning to accelerate Georgia’s integration into NATO while some mentioned that the Government of Georgia is already preparing for opening the US military base.

Notably, such articles are accompanied by the extensive explanations on how the US and NATO “use” Georgia for their own objectives and how they attempt to foster “tensions” in the Caucasus through it. For instance, in the article of Новое Время, it is said: “It is useful for NATO powers to constantly allure Tbilisi with NATO and pretend that Brussel dreams of its integration into the organization… Such allocation of powers enables NATO to use Georgia as a source of constant tension in the Caucasus, as a revolver pointed at Russia’s southern underbelly. However, this does not mean that NATO seriously plans to engage in military activities here. In line with the glorious Anglo-Saxon traditions, allies prefer to set fire with someone else’s hand and Georgia is performing this role now. And “lame duck” Pompeo will remind the government of Georgia about this”.

Besides Russia, according to the observation on sources, the occupied regions of Georgia also closely follow Pompeo’s visit to Georgia. For example, the disinformation that, allegedly, Georgia helped Azerbaijan and Turkey during the conflict in Nagorno-Karabakh as it allowed the Turkish armament to pass through its territory while the borders for Armenia were closed, which is not true, is actively spread in so-called South Ossetia. As the Ossetian sources report, this was done by Georgia because in the case of Azerbaijan’s victory in the conflict, in Georgians’ opinion, Russia’s positions in the region would weaken, which, in fact, did not happen. For this, according to the information spread in so-called South Ossetia, the only way for Georgia now is to allow opening the US military base on its territory. So, the Ossetian sources link Pompeo’s visit to this.

To conclude, IDFI’s observation on the information regarding Pompeo’s visit to Georgia in the Russian-language internet space revealed that the Russian online media has paid significant attention to this topic during the last week. The assumption that, due to the new reality in the region, the US may broaden military cooperation with Georgia was emphasized in the Russian sources. The information spread by the Russian information portals on this topic shows that these processes are closely observed in Moscow as well as occupied regions of Georgia. If Georgia truly receives such offer on broadening the military cooperation with the US and/or NATO, Russia has already prepared the official narrative on how the US and NATO use Georgia for “fostering tensions” in the region which will, supposedly, be actively spread by the Kremlin-affiliated media and information portals.