Due to events of the 90’s and 2008 August War, thousands of Georgians were forced to leave their homes. According to data from the Ministry of Internally Displaced Persons, in 2014, 86,283 families or 259,247 individuals were registered as internally displaced (IDP).

Taking into account the economic situation of the country and the number of refugees, Georgia has been facing a significant challenge to solve the IDP problem. Therefore, greater effort is needed from the Georgian government to solve the problem of permanent housing for IDP families.

To this day, 37,000 families are waiting to receive long-term housing. In order to satisfy all of these families, the Ministry needs approximately GEL 1.5 billion.

IDFI requested information from the Ministry of IDPs about the funding of IDP housing projects for 2008 – 2016.

According to the Ministry, as of December 1, 2016, 35,457 IDP families had been provided long-term housing, from which 24,475 families own the property where they live and 5,387 families were given the compensation instead of housing.

The Ministry has the following programs to provide IDPs with housing:

According to the Ministry, until 2013 the program for resettling IDPs in restored or newly constructed buildings was managed only by LEPL Municipal Development Fund. After 2013, the Ministry joined the Fund in financing the program. 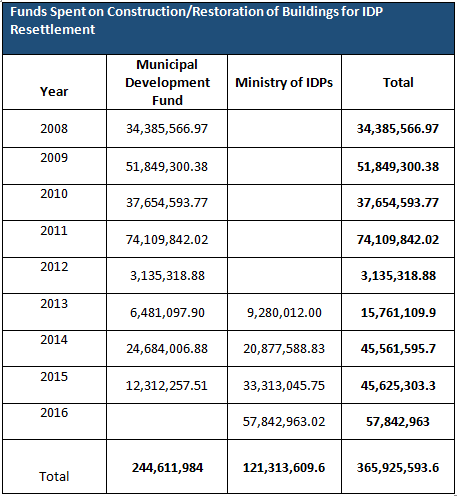 After receiving information from Ministry, IDFI requested the same data from the Municipal Development Fund.

After 2008, as a result of construction/restoration work done by the Ministry and the Fund, 18,654 refugee families received housing. 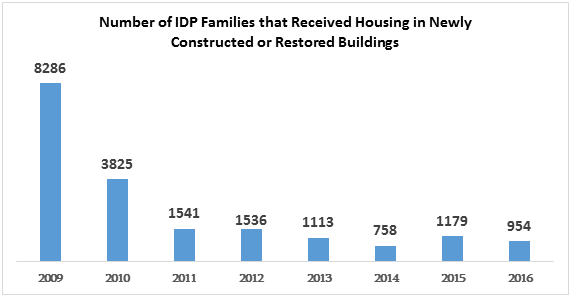 Since 2013, the Ministry launched a new program: buying individual houses for IDPS in villages and acquiring IDP accommodations that are privately owned.

We welcome the fact that since 2013 the Ministry started to implement additional programs to provide IDPs with housing. However, the trends of accommodating IDPs with housing demonstrate the necessity of increasing efforts from the state.

As of December 1, 2016, long-term housing has been provided to 35,475 IDP families. Around the same number are still waiting to receive support; Specifically, there are 28,901 pending requests to receive housing, 7,999 request to purchase accommodation that is privately owned, and 531 request to pay mortgage loan.

According to the Ministry’s estimates, to accommodate remaining IDP families GEL1.5 billion is needed. However, if current levels of financing are to be maintained, it will take another 20 years to provide every IDP family with housing.

Because internally displaced persons from the Occupied Territories lost their homes due to armed conflict, every Georgian government is obligated to make the timely accommodation of IDPs a top priority of its social policy, and together with international support direct government spending to accelerate this process.

IDFI believes that if the Georgian government had saved on administrative spending over the past several years, it would have been possible to mobilize additional budgetary resources to solve the problem of IDP housing. For example, since the 2008 August War, more money has been spent on salary supplements and bonuses than is needed (GEL 1.5 billion) to accommodate every remaining IDP family. According to the State Audit Office report, from 2011 to 2016 (8 months) alone, state employees received GEL 1,735,331 in supplements and bonuses. Unfortunately, the IDFI does not have data prior to 2011. However, taking into account the current trends, only 50% saving on supplements and bonuses and diverting this money towards IDP needs means that every IDP family would have been provided with long-term housing.