Quality of Governance Expert Survey - Assessing Bureaucracy in Georgia in 2014

In 2015 the Quality of Government Institute at the University of Gothenburg published an Expert Survey Report II. The report assesses the design and the administration of bureaucracy as of 2014 in 159 countries, including Georgia. The survey was sent out to seven experts from Georgia, including the Chairman of the Institute for Development of Freedom of Information (IDFI) – Levan Avalishvili.

The Quality of Government Institute is a research program that started at the University of Gothenburg in 2004. The program studies the nature, causes and consequences of “good governance” and “quality government” on human well-being and researches the relationship between the quality governance and citizens’ welfare . Through the program, the researchers of the University of Gothenburg also try to engage in the debates with those experts from various fields (such as economics), that are interested in the matters of good governance.

According to the report, the practice of recruiting public servants is the most problematic area in Georgia. In this category Georgia has the lowest score for public sector employees being selected based on their skills and merits. There are problems with the influence of political figures over the process of appointing civil servants. The practice of the top political leadership hiring and firing senior public officials is the most frequent case in Georgia after Ukraine, which highlights existing problems in the process of hiring professionals in the public service. It is worth noting that the survey assesses the professionalism of the public service according to the recruiting practices. Therefore, the level of professionalism in Georgia significantly lags behind the indicators of the countries such as Estonia, Lithuania, Sweden and Germany. 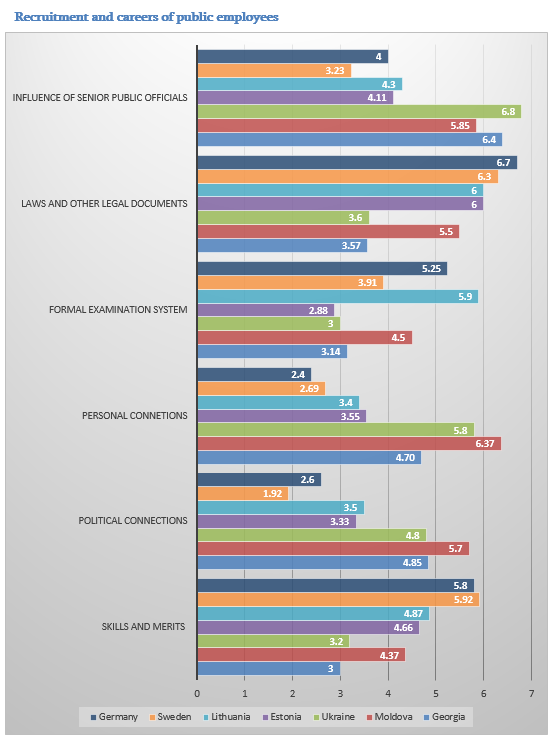 Significant problems were identified in the practice of corruption and embezzlement. In this category, Georgia scored high in the frequency of the members of executive, legislative and judiciary branch being involved in the practice of granting favors in exchange for bribes, kickbacks or other material inducements. Similar issues were identified in case of public servants being involved in corruption and embezzlement. In this category, Georgia’s score is two times higher than that of Germany and Sweden, highlighting the problem of the frequency of illegal activities, including misappropriation of state resources. 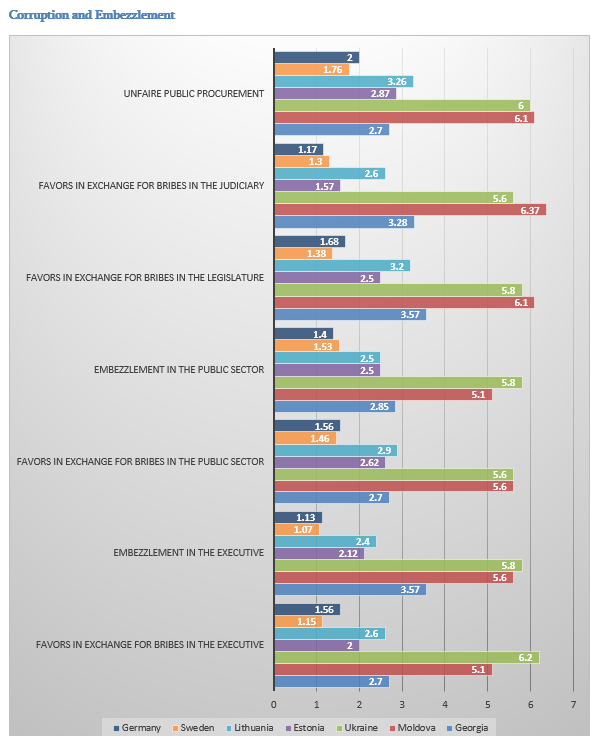 The report also identified the issues with public sector employees trying to fulfill the ideology of the party/parties in the government, as well as implementing the policies decided upon by the top political leadership. Problems were detected with regard to treating some groups in the society unfairly during the policy implementation process. It shall be noted that the report uses the assessment of policy planning and implementation to evaluate impartiality of public sector. Hence, there are significant problems in terms of impartiality of public sector in Georgia, highlighting its ineffectiveness and politicized nature. 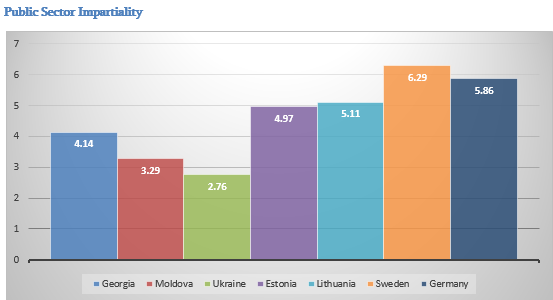 The QOG Expert Survey positively assesses the transparency of the public sector in Georgia. Georgia has the best indicator in the category of media coverage of the abuses of power. The availability of official documents and reports, as well as the openness of the flow of government revenues and expenditure also scores well compared to other states used in the analysis. The results in this category indicate the effectiveness of the measures implemented for improving the access to information and transparency in public sector in Georgia. 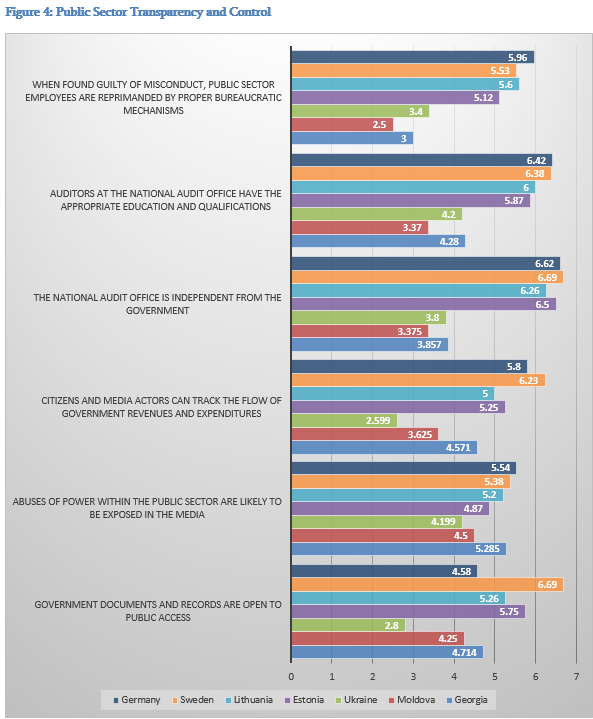 As the survey of the University of Gothenburg illustrates, there are some problems in the administration of public sector in Georgia, requiring systemic approach to the issue. The Government of Georgia has already started the Public Administration Reform, including in the areas of public fund management system, human resource management and policy planning.

In terms of policy planning, the reform includes the creation of result-oriented management, reporting, monitoring and assessment systems to improve the Government efficiency. The aim of reforming the management of public finances is financial stability and effective allocation of public resources in line with the Government’s priorities. Reforming the human resource management involves the creation of effective and efficient merit-based civil service, supporting and rewarding professionalism at the workplace.
The new Law on Civil Service, approved by the Parliament of Georgia in 2015, also aims to create a professional, merit-based civil service. The new law partially responds to some of the challenges and deficiencies identified by the QOG Expert Survey Report. Despite the fact that the main goal of the law is to create a professional civil service, parts of the law still inhibit the principle of competition during the recruitment process of civil servants. According to the new law, the government’s role in the functioning of public sector is increased. The issues was highlighted several times in numerous researches done by IDFI. The analysis of the new Law on Civil Service illustrated, that according to the new law approved by the Parliament, “big part of regulations is passed over to the Government’s decrees”, creating the risks of altering subordinate normative acts by the Government. Therefore, with the new powers attributed to the Government by the new Law on Civil Service, there are major risks of corruption and the abuse of power. In fact, as the QOG Expert Survey illustrated, Georgia has one of the worst indicators in this category. Unfortunately, despite the reforms in public sector, effective mechanisms for avoiding similar risks still do not exist.

We think that it is important to pay attention to the deficiencies illustrated in the QOG Expert Survey Report of the University of Gothenburg while implementing the Public Administration Reform. Addressing the problems identified in the reform will facilitate the implementation process of the Public Administration Reform initiated by the government of Georgia and fulfillment of the obligations under the Association Agreement on Deep and Comprehensive Free Trade Area between the EU and Georgia.