Public involvement is crucial to be ensured for crime prevention as well as in the process of strengthening the police accountability and oversight of its activities. This, on the one hand, helps the system to become more effective and transparent and, on the other hand, increases public engagement as it helps the relevant entity and citizens to co-work on the establishment of community crime prevention mechanisms.

In the United States of America the creation of such councils (civilian oversight agency) started in 60-ies of the 20th century and nowadays, more than 200 councils exist in the USA. Councils are composed of members of the public and are fully independent from the local police as well as the Ministry of Internal Affairs. Civilian oversight agencies in the USA are of different models that is related to the differences in their mandates. However, as usual,  highly effective civilian review board, together with other rights and duties, have the authority to investigate or review complaints of human rights violations by the public against the police. 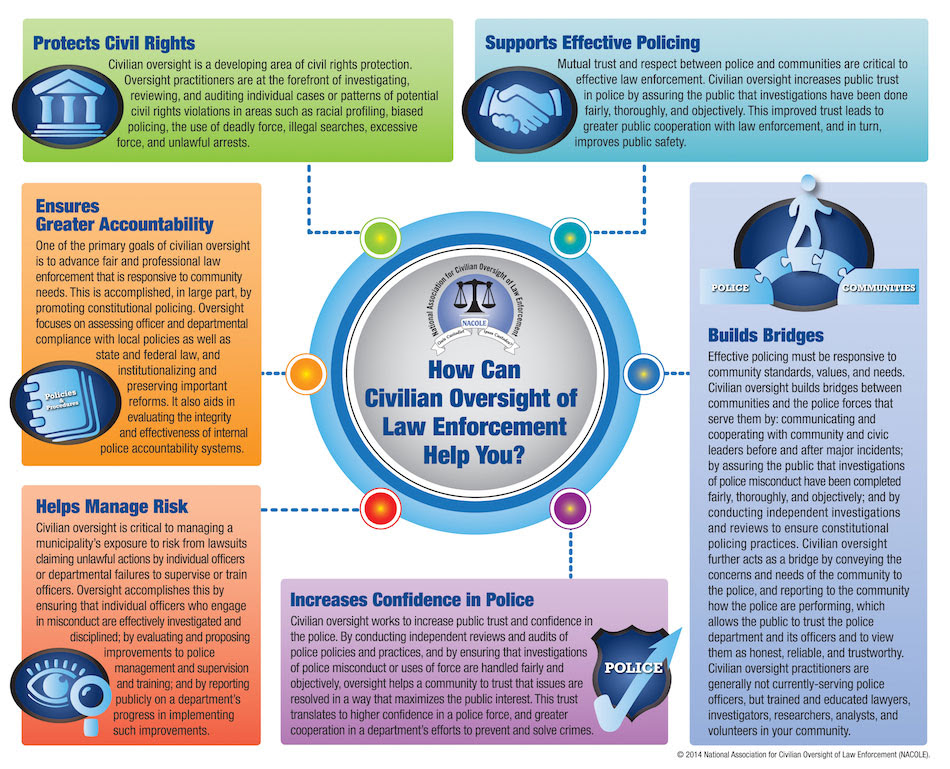 In the process of reforming the Ministry of Internal Affairs, in 2015, the Institute for Development of Freedom of Information (IDFI), as the member of the Working Group on Reforming the Ministry of Internal Affairs of Georgia, was actively supporting the creation of the effective citizen engagement mechanism at MIA. For modernization of the entity IDFI elaborated the recommendation on the basis of international practice. The recommendation implied to establish a Public Involvement Council as a pilot project based on the American model. IDFI was also actively supporting the creation of Public Involvement Councils at municipal level (pilot version) for crime prevention purposes within the process of developing new commitments for the OGP Georgia Action Plan 2016-2017 by Open Government Georgia Forum.

Accountability and transparency, that are also central principles determining the democracy of police activities, demand that the police be open to having their activity observed. Herewith, it is tremendously important for public to have the opportunity to file a complaint against police. According to the Law of Georgia on Police, internal (General Inspectorate of the Ministry) and external (on the basis of parliamentary, presidential, governmental, financial, and prosecutorial supervision) control of activities of a police officer and other employees of the Ministry is being carried out. However, the law does not specify the possibility of police oversight by an external independent mechanism. According the law, a person who believes that his/her rights and freedoms have been violated by action of a police officer shall have the right to appeal against that action to a superior official, the Prosecutor's Office, or to the court as provided for by the legislation of Georgia. However, the external independent body having authority to review complaints by the public against the police does not exist.

Even though the existence of Public Involvement Councils is considered a good practice, since it aims to prevent the police from misusing their powers, to prevent political authorities from misusing their control over the police, and most importantly, to enhance public confidence and establish police legitimacy, the Ministry of Internal Affairs did not consider IDFI’s recommendation within the reform.

Unlike the Ministry of Internal Affairs of Georgia, in 2016, the Prosecution Service of Georgia, within introducing new approaches to combating crime, launched a project “Local Council” based on American model. However, there are some significant differences between local councils and American civilian oversight agencies.

Local councils represent coordinating bodies on the regional level aiming to consider local needs, increase coordination and involvement of members of community members. In addition to the representatives of local self-government, non-governmental organizations and members of the public, representatives of law enforcement agencies and local government bodies are also members of the local councils. This, on the one hand, excludes the independence of the council from the entity and, on the other hand, indicates that public is not given the leading role in the functioning of the council.

The function of the Local Council is to discuss the criminological situation in the region, make decisions regarding the necessary preventive measures in the region, develop initiatives and determine the coordinated plan to fight crime in collaboration with other state agencies and non-governmental organizations. However, an effective council, as usual, also has the authority to review complaints of human rights violations by the public against the relevant entity.

It should be noted that in order to promote crime prevention and law enforcement, permanent local inter-agency councils were established with N416 ordinance adopted by the Government of Georgia on 13 August 2018. Their activities are coordinated by the Ministry of Internal Affairs of Georgia. These councils are composed of the representatives of the executive branch. Representatives of other state agencies operating in the relevant territorial unit, as well as representatives of international and non-governmental organizations, non-profit (non-commercial) legal entities, scientific circles, experts/specialists in the relevant field and thematic target groups may be invited to participate in the activities of the council.

Councils are responsible to review proposals on crime prevention and law enforcement, elaborate recommendations, determine measures (in accordance with local needs) to be taken to prevent crime and maintaining public order, discuss the criminological situation in the region, ensure public engagement in the process of developing and implementing initiatives and proposals related to preventive activities. Although these councils, to some extent, ensure public engagement in crime prevention process, like the local councils created by the Prosecution Service of Georgia they also differ from the American model of civilian oversight agencies in terms of both membership and authority.

Nowadays, in Georgia there still does not exist fully independent public mechanism for promoting police accountability and crime prevention. Public Involvement Council, as a link between the public and the police, is an important instrument for civilian oversight of police. Besides, through engagement it provides an opportunity to fight crime together.

IDFI believes that ensuring public involvement in the process of strengthening police oversight is crucially important for a democratic state. Thus, based on good practice, IDFI supports the establishment of Public Involvement Councils as an independent external mechanism that, together with other rights and duties, will have the authority to review complaints by the public against the police.