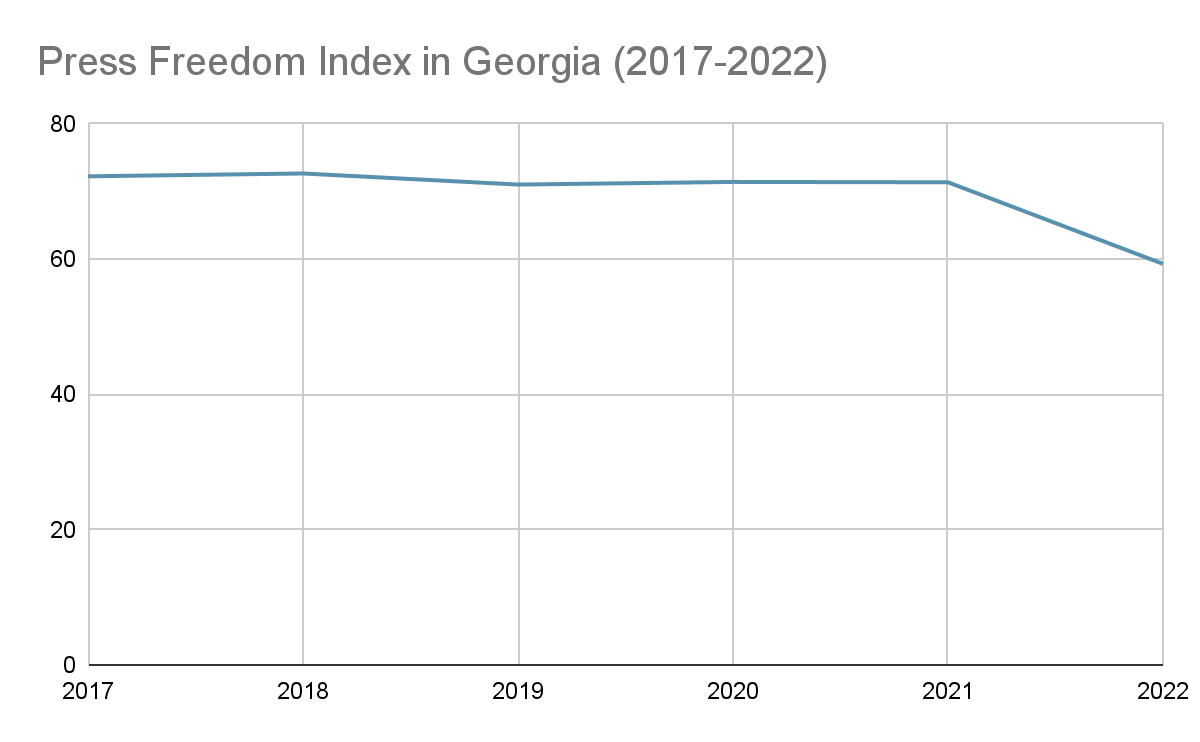 RSF points out reasons that led to such setbacks. “Official interference undermines efforts undertaken to improve press freedom. In 2021, the country saw an unprecedented number of physical assaults on journalists.” That is how RSF’s assessment begins.

A particularly difficult situation is observed in the direction of journalists' safety. In particular, according to a security indicator, Georgia ranks 135th among all 180 countries, which is largely being the result of an assault on journalists that took place in July 2021. Security indicator significantly worsened and is 41.34, which is only 1.34 points away from being “Very Serious” according to the RSF scale.

Regarding the general media landscape, RSF considers the media landscape to be diverse and, at the same time, heavily polarized. Television is the principal news source. Media owners often keep their hand in controlling editorial content. Hence, the Rustavi 2 opposition television network up-ended its editorial line after the company was returned to a previous owner. Regional and community radio stations are strengthening, as readership of the print media declines and the online news audience grows.

By assessing political indicator, RSF mentions that the country is undergoing a new and serious political crisis following contested legislative elections in October 2020. This environment favors sustained competition for control of television networks. Georgian law prohibits political parties from owning media, but the big networks generally defend the interests of their owners, who often have close ties to political leaders. The same tendency exists in state-owned media, which are subject to interference from the authorities, who respond to media criticism with censorship, raids and intimidation. According to political indicator in 2022 Georgia has 52,42 points, which falls into the “difficult” category in accordance with RSF scale and takes 102th place.

According to RSF, the government made clear its aim to control independent radio stations and television networks by way of a change in the electronic communication law. Courts have tried to attack source confidentiality, although the law on freedom of expression guarantees it. Georgia has the best result in legal framework indicator among all five indicators, which is 80.79 points and the country ranks 32nd in this category.

RSF considers the advertising market to be underdeveloped in the print and online press, which are largely financed by donors, usually from the West. According to this indicator, Georgia’s result is pretty low, which gives 46.63 points and 74th position.

Georgian society is marked by strong social tensions on certain issues, which affect journalistic coverage. The topics include religion, LGBT rights and Russian influence. Influential social figures, such as members of the Orthodox clergy, are electronically monitored by security services, thereby violating journalists’ confidential source protection. According to sociocultural index, in 2022 Georgia has 75.50 points and holds 67th position in ranking.

According to RSF “Verbal attacks and physical assaults on journalists are common. Aggressors include senior government officials, especially during election campaigns. A lynch mob’s sustained and brutal assault on 50 reporters during homophobic counter-demonstrations in July 2021, under the gaze of security forces, marked an unprecedented setback.” Among all five indicators, Georgia has the lowest index in security. Security indicator significantly worsened and is 41.34, which is only 1.34 points away from being “Very Serious” according to the RSF scale. Georgia stands 135th among all 180 countries by security index. 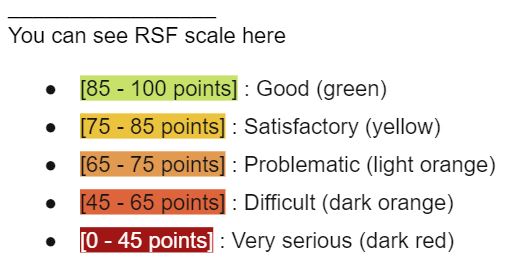