On June 6, hotel “Vere Palace” hosted the OGP forum meeting, held within the frames of the Anti-Corruption Council. The meeting was attended by the representatives of government, parliament and NGO sector. Meeting aimed at discussing the commitments taken under the 2014-15 action plan according to the recommendations, elaborated by the NGOs and comments, provided by the steering committee of OGP.

Meeting was held in three parts. First part commanced with the opening speech of the First Deputy Minister of Justice Aleksandre Baramidze, who talked about Dublin meeting and emphasized the great chances of Georgia in becoming the member of steering committee. Mr. Baramidze talked about the successful presentation of Georgia on Dublin summit, where the speech of the Minister of Justice, Thea Tsulukiani deserved special attention. Other than that, Georgia was among those small number of countries, which were represented by the members of Parliament – regional meeting was attended by Tina Khidasheli.

MP Tina Khidasheli expressed readiness in cooperating with forum in legislative issues. She underlined the crucial importance of transparency and stated that the budgetary processes must be proactive; also, she noted that the web-page of the Parliament of Georgia needs to be renovated in order to make it user friendly with fast and easy navigation.

The next speaker of the forum – David Stonehill – Deputy Director of the USAID Democracy and Governance Office, underlined the Georgian achievements in regards of the OGP issues, talked about the Freedom of Information Decree and welcomed the engagement of Parliament in these processes. He also noted that OGP is not the struggle for more transparency and accountability for developing countries. Even the USA is actively involved in these processes.

Secretary of the Anti-Corruption Council, Rusudan Mikhelidze summarized the work of the forum. During the process of elaborating the action plan, forum has conducted 19 meetings with more than 700 persons. During this period of time, action plan was elaborated to respond the following challenges: public service, increase of public participation, improved management of public resources and creating safe environment. Ms. Mikhelidze emphasized four the most ambitious commitments taken within the frames of the 2014-15 action plan: E-petitions portal, Opendata portal, Freedom of Information Act and E-archive. In addition, Rusudan Mikhelidze also made the attendants familiar with the comments of the steering committee. 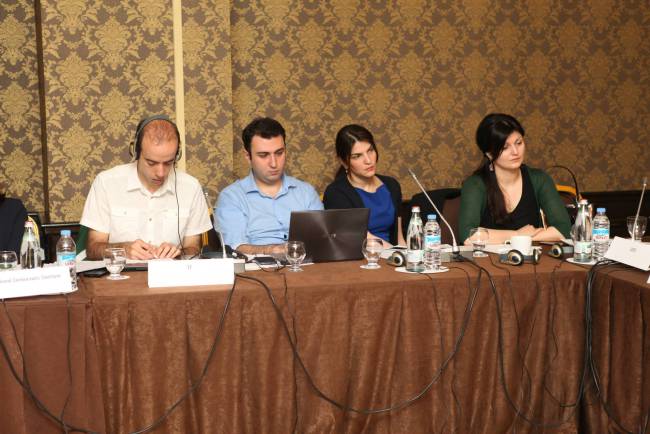 The representatives of the NGOs presented the recommendations. Director of the Institute for Development of Freedom of Information – Giorgi Kldiashvili, representatives of TI Georgia – Lasha Gogidze and Partnership for Road Safety -Keti Murusidze gave speeches. Giorgi Kldiashvili talked about the e-petition portal – ichange.ge. He strongly emphasized the importance of eliminating the practice of eavesdropping and talked about the e-procurement, declarations and e-archives. The presentations of the NGOs was followed by the discussion among the responsible institutions who responded to the comments and remarks of the NGOs.

The second session of the forum started with the sppech of Tamar Razmadze, representative of the State Chancellery about the e-petition portal ichange.ge. She noted that the remarks of the NGOs about online consultation platform is interesting idea, however, it is not recommended to put it under the commitments, since the institution may fail to implement this initiative. On the same session, representatives of the Ministry of Internal Affairs of Georgia and the Archive of the Ministry of Internal Affairs responded to comments. Shalva Khabuliani talked about publishing the crime statistics, while the representative of the archive concerned the issue of archive service prices.

The third part was dedicated to the presentation of the representative of TI Georgia – Etienne Baqué, who made the participants familiar with the recommendations about the open data portal, which was followed by the presentation of the National Coordinator of OGP – Ketevan Tsanava, who talked about the 2014 OGP award. Rusudan Mikhelidze made the attendants familiar wi the the OGP Steering Committee elections and noted that Georgia has significant chances to become member of the committee.

The OGP forum was finished with the discussion about the further activities for awareness raising about OGP issues.