OGP released the video records of the GLOW Conference 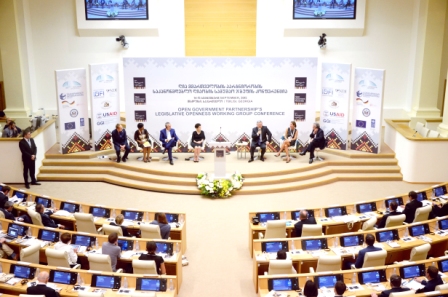 On September 14-15, Meeting of the Open Government Partnership's Legislative Openness Working Group was held in the palace of the Parliament of Georgia in Tbilisi. The two day conference - "Committing to Openness: Parliamentary Action Plans, Standards, and Data" was a part of the OGP Global Legislative Openness Week (GLOW). In addition to the representatives of the legislative and executive bodies of Georgia, representatives of international organizations and NGOs located in Georgia, participants had come together from more than 32 countries of the OGP.

In relation to this event, OGP has released the video records of the conference for those who were not able to attend the conference. Via the link mentioned above, it is possible to watch the panel discussion and speeches in English.

It should be mentioned that the conference was organized by: the Parliament of Georgia, OGP Legislative Openness Working Group (NDI and the Congress of Chile), UNDP, Institute for Development of Freedom of Information (IDFI), USAID, EU representation to Georgia, GIZ and Transparency International – Georgia.