Official Communication Regarding the Exports of Dairy Products to Russia

On March 6, 2022, the Russian news agency RIA Novosti reported that the Russian Federal Service for Veterinary and Phytosanitary Supervision (Rosselkhoznadzor) had allowed 15 Georgian companies to supply milk and dairy products to Russia. According to the representative of "Rosselkhoznadzor", Yulia Melano, the decision was made as a result of negotiations between the head of "Rosselkhoznadzor", Sergey Dankvert, and the head of the National Food Agency of the Ministry of Agriculture, Zurab Chekurashvili.

The information spread by Russian media, which was preceded by the imposition of international sanctions on Russia over its unlawful invasion of Ukraine, led to considerable public outcry. Representatives of the government and the business sector made clarifications regarding this issue:

The Minister of Environment and Agriculture said that in 2020, at the request of the companies, only the relevant documents on this issue had been sent to the Russian side, and no additional communication took place, and that a few days previously, the Ministry received an answer from Russia that the markets would be open. The Minister additionally explained: "This is a complete process, for which I declare, with full responsibility, that it went as stated. This is an opportunity for our companies to plan more production, to operate at their full capacity, and to have concrete plans in the long term." The Minister of Economy, Levan Davitashvili, also confirmed that communication with the Russian side regarding the entry into the Russian market took place in 2020 at the prompting of several companies, and since the communication had not resumed. To a question from a journalist on whether the government can definitively state that no exports from Georgia to Russia are planned during the current conflict in Ukraine, Davitashvili replied: "We have made it clear that we are committed to many international decisions, participants in them, but we are do not impose separate, individual sanctions. We have spoken to this issue clearly throughout the week and explained the reasoning, etc."

The director of the Association of Dairy Producers also stated his position, declaring that "due to the situation, there are difficulties [in Russia] and they want to import some products from somewhere, but the firm position of our Association and its member companies is that we are not going to export dairy products there, at all. Our main task in the current situation is to provide food to Georgian consumers and, no company is planning to enter the Russian market, especially with the current situation."

On March 9, 2022, IDFI addressed the Ministry of Environment Protection and Agriculture of Georgia with a request for copies of correspondence with private companies and the Russian side within the framework of the negotiations on the exports of agricultural products to the Russian Federation. IDFI received a reply to this request from the LEPL National Food Agency subordinated to the Ministry.

According to the documents and explanations provided by the Agency, communication with the relevant service (Federal Service for Veterinary and Phytosanitary Control of the Russian Federation) regarding the exports of milk and dairy products from Georgia to the Russian Federation began in 2019 on the basis of a written request from Georgian companies, the stated position as recorded at the thematic meetings with the Agency, and the relevant questionnaires completed by the companies. According to the documents, the correspondence with the National Food Agency on this issue began on June 17, 2019, when "Lilo Cheese" Ltd. informed the Agency in writing that an agreement had been reached with Russian companies on cheese exports and asked the Agency to mediate with the relevant Russian services on their behalf. Specifically, Lilo Cheese Ltd. explained in the letter that they had held intensive negotiations in the last three months with various companies from the Russian Federation, whose representatives visited their factory 4 times, after which a final agreement was reached and the first export was planned for May-June of that year. In response to this letter, the Agency clarified to Lilo Cheese Ltd. that a working process was underway between the Agency and the Russian Veterinary and Phytosanitary Supervision Service to prepare and provide relevant information for the right to export dairy products to the countries of the Eurasian Economic Union.

After the aforementioned communication with Lilo Cheese Ltd., on August 16, 2019, the Agency sends the required technical information (production capacity, regional dairy resources, etc.) of 4 Georgian companies (Lilo Cheese Ltd., Sante GMT Products, Tsipora Samtskhe Ltd., Respublika Ltd.) to the relevant Russian supervisory service. Accordingly, at the initial stage, in addition to Lilo Cheese Ltd., three other companies had expressed a desire to export dairy products to Russia. One of them, Respublika Ltd. addressed a letter to the Agency on November 12, 2019, informing them that the relevant documents had not been sent to the Russian side by the Agency and requesting that the documents be sent again. The Agency, for its part, explained to the Respublika Ltd. on 15 November, 2019, that it had already sent all the required documents to the relevant body of the Russian Federation through the Ministry of Foreign Affairs.

Companies that expressed a desire to export dairy products to Russia at the initial stage:

- Lilo Cheese Ltd. (405313236) - Giorgi Danelishvili owns 100% of the company, holding the position of director. The company was registered in the public register on January 25, 2019. On June 17, 2019, the company sent a letter to the National Food Agency regarding its desire to export to the Russian market.

- Tsipora-Samtskhe Ltd. - 100% owned by Revaz Kachkachishvili, a dual citizen of Georgia and Greece.

As explained by the National Food Agency, according international practice, the decision to allow products on the market is made on the basis of inspections of enterprises in the producing countries. According to a letter from the Federal Service for Veterinary and Phytosanitary Control of the Russian Federation of March 19, 2020, the Service expressed its readiness to inspect production facilities for fish and animal product on site, but due to Covid restrictions, the exact date would be specified later.

Discussions of the issue resumed at the end of 2021. The National Food Agency also inquired about the readiness of other companies to export dairy products to Russia. To this purpose, on December 20, 2021, the National Food Agency addressed a letter to the Association of Dairy Producers "Sakrdze", informing them of the opportunities to export dairy products to the Russian Federation. At the same time, the Agency inquired about their willingness to export to Russia, which would require on-site inspections of the companies by relevant Russian services. On December 29, 2021, the Association of Dairy Producers "Sakrdze" sends information about 12 companies that expressed their readiness to export dairy products to Russia and go through the relevant procedures to the Agency.

On January 26, 2022, the National Food Agency informed the relevant Russian service that 15 companies had expressed a willingness to export dairy products to Russia. A the same time, due to COVID-19, the service was asked to consider the possibility of conducting remote inspections. According to the letter, the following companies expressed their desire to export dairy products to Russia (the documents provided by the Agency conceal information about four companies, which are presumed to have the status of independent producers, on the basis of personal data protection):

It should be noted that Lilo Cheese Ltd. and Respublika Ltd. are not found among these companies, even though the process of negotiations on the exports of dairy products to Russia began in 2019 based on the requests of these companies.

According to the documents provided by the National Food Agency, the official communication between the Agency and the Russian side ended on February 22, 2022, 2 days before the Russian invasion of Ukraine. Additionally, according to the Agency, the decision to allow milk and dairy products produced in Georgia without inspection on the Russian market was made unilaterally by the Russian side, and information on this decision was spread by Russian media outlets. The Georgian side, however, has not yet received an official written document from the relevant authorized body of the Russian Federation on the admission of Georgian milk and dairy products to the Russian market. 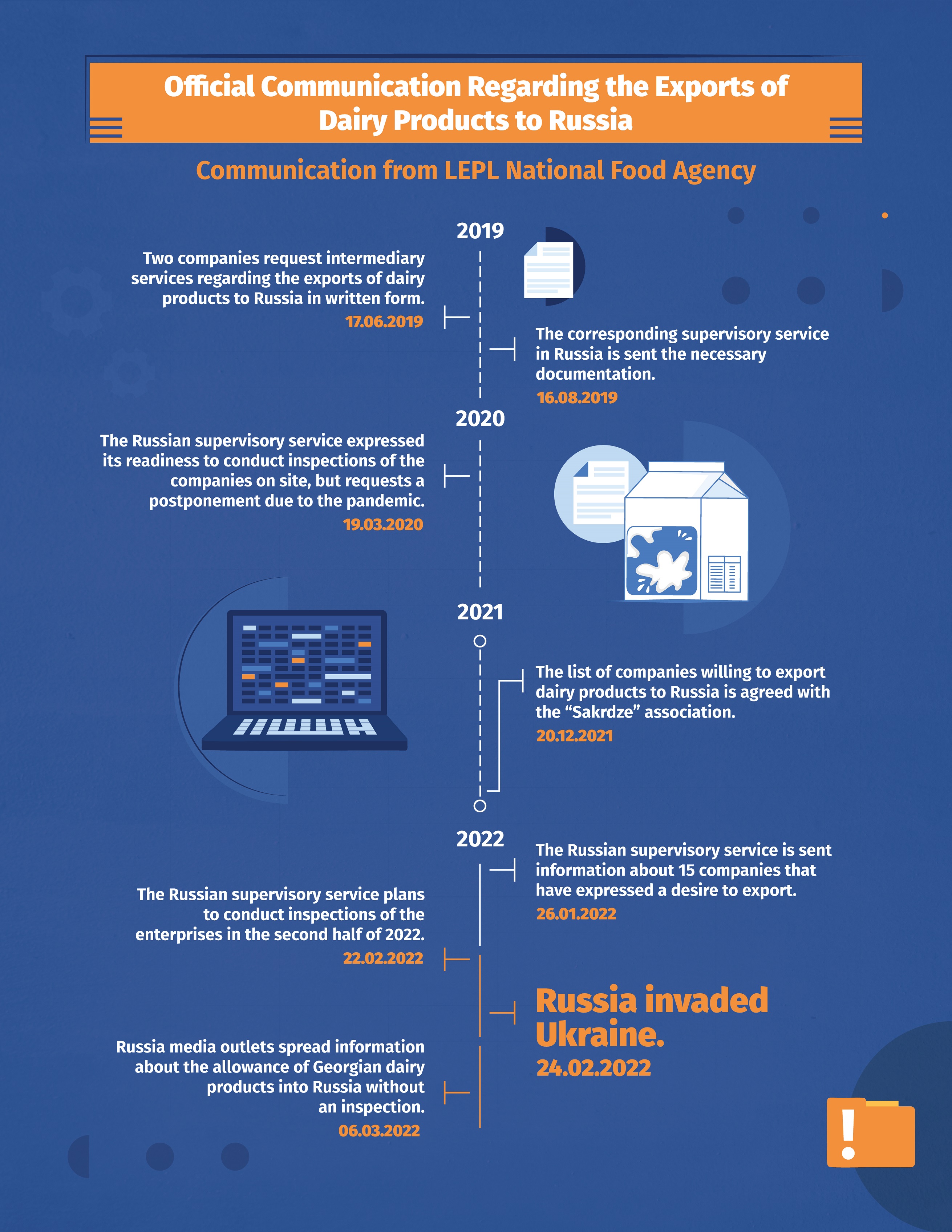 Analysis of the documentation received from the National Food Agency at this stage shows that the Georgian side was negotiating the exports of dairy products to Russia before Russia's unlawful invasion of Ukraine. Meanwhile, after the start of the war, bringing this issue to the forefront of public attention in such a forced manner by the Russian side was likely aimed at causing damage to the reputation of Georgia. Additionally, IDFI believes that the response of the Georgian authorities to the information reported in Russian media was not clear and consistent, which allowed for varying interpretations and provoked the dissatisfaction of both the local and international communities.