Development and effective usage of modern technologies is important for economic growth of any country. The research “Global Information Technology Report 2014”, released by World Economic Forum, reveals interrelationship between these two factors – development of modern communication technological infrastructure and economic well-being. Based on political and business environment, internet accessibility and features of internet consumption as well as social and economic impacts of new technologies, the above mentioned research measures Networked Readiness Index of countries.

Compared to the previous year, Georgia has significantly improved its position in 2014. While in 2013 it ranked 65th with the value of 3.93, nowadays it occupies the 60th position (out of 148) with 4.1 point. Generally, along with Armenia, Kazakhstan, Panama, Qatar and the United Arab Emirates, Georgia is placed in the group of “Rising Star” countries. It implies that Georgia’s scores are above the sample average as well as are growing more quickly than average. Moreover, the research asserts that these countries can be singled out for their noticeable positive changes.

Networked Readiness Index measures preparedness of economy of a country to use and leverage ICT for prosperity and growth with the consideration of the following factors: 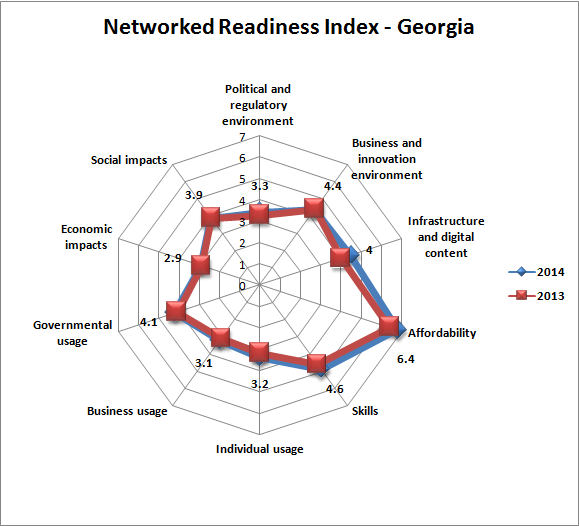 Georgia has gained best results with regard to readiness sub-index (it was increased by 0.4 point). Precisely, it ranked highest positions among other countries in terms of internet and telephony competition. Also, its position was relatively higher (obtained the 40th place) in case of international internet bandwidth, per user. However, several circumstances are worth highlighting: while it occupies the forth position in terms of adult literacy rate, Georgia lags far behind concerning quality of education system (rank 105) and level of math and science education program (rank 106). Overall, with regard to parameters considered under the readiness sub-index – affordability, infrastructure and digital content, skills – Georgia obtained 6.8 point out of 7 in affordability. Values for the other two criteriawere between 4.5 and 4.9.

As for the three remaining sub-indexes, environment was assessed by 3.9 point. It is noteworthy that the main focus was made not only political, but also business atmosphere of the country. Georgia showed the best figures in terms of opportunities for starting a business – the second and the third positions for the amount of days and procedures to undertake a new enterprise. Nevertheless, this research asserts that one of the main obstacles to business environment in Georgia can be assumed limited availability of latest technologies (4.4 point). In case of political and regulatory policy the situation can be described the following way: Georgia occupies lowest positions in terms of protection of intellectual properties (rank 124, 1.7 point) and percentage of software installed (rank 107). Apart from this, simplicity for business to challenge government actions and/or regulations through the legal system equals 3.0 point. Besides, according to the report, Georgia is placed among the countries, where despite the existence of regulatory laws, authorities and mechanisms necessary for their enforcement are quite weak. It is noteworthy that the situation in this regard remained the same since 2013. 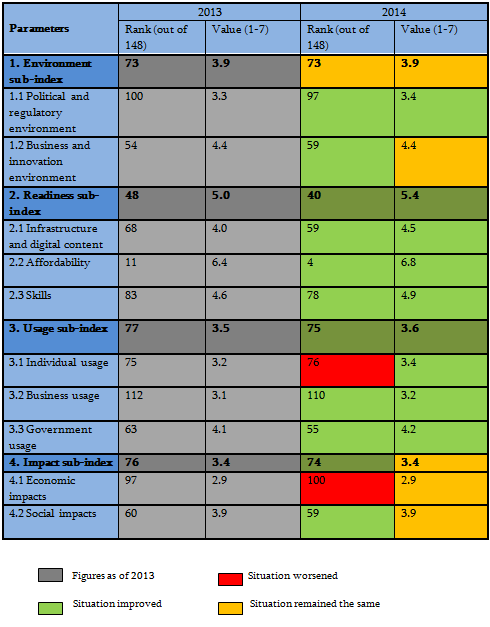 According to the value of each main parameter, political and regulatory environment is followed by ICT usage sub-index. It comprises level of consumption of ICT by three actors: individual, business and government. It is obvious from the data that private sector enjoyed the worst figures (3.2 point). It should be mentioned that researchers gave Georgia lowest points in the following criteria: capacity for innovation, firm-level technology absorption and the extent of staff training.

ICT usage on individual level appeared to be better – 3.4 point. In this direction, Georgia occupied lower position in contrast to other countries in terms of percentage of households with personal computer (32.7%) and the extent of mobile broadband subscriptions. However, the rate of usage of virtual social networks (5.8 point) and the number of subscriptions of fixed broadband internet seemed more encouraging (8.7 per 100 pop.). For comparison, even though, compared to the previous figures, this measure increased by 0.2, Georgia took a step backwards by one position. This fact indicates that the speed and level of advancement of accessibility of ICT do not catch up with the international tendencies in this direction.

With regard to the third actor, government, Georgia demonstrated the best results in terms of government online service index (rank 42). In spite of this, scores gained by Georgia were quite modest in two issues: importance of ICTs to government vision (3.7 point) and government success in ICT promotion (4.4 point).

Georgia had lowest assessments concerning impact sub-index, which measures the role of ICTs in various economic and civic activities. Despite the improved position compared to countries worldwide (moved ahead by two positions), its score has not increased and still equals 3.4. Even though social impact (3.9) exceeds the criteria of economic impact (2.9), in case of the former new technologies have insignificant effect on the provision of latest services and products. Additionally, business representatives infrequently attempt to establish new organisational models (virtual teams, remote working, telecommuting and etc.).

With regard to importance and effect of ICTs on civil life, results make it evident that usage of the services developed by the government has become more effective (4.7). However, relatively low figures have been witnessed with regard to actual role of new technologies in provision of particular services (4.3), at the same time, internet accessibility at schools has been assessed by 4.5 point out of 7 (rank 62). Georgia held relatively advanced positions in terms of e-participation index (quality, relevance and usefulness of government websites in providing online information and participatory tools and services to their citizens) – the 41st position.

In conclusion, the research demonstrated that growing tendency with regard to internet penetration is sustained in Georgia. Despite stabile political and business environment, Georgia has main challenges in the direction of developing innovative technologies and using their benefits thoroughly. This can be attributed to, on the on hand, low level of absorption of latest technologies by business sector and on the other hand, lack of sufficient level of education/system and necessary skills and abilities. The role of the government is worth mentioning as well, since interaction between various agents involved in internet market should be regulated solid legislative foundations/frameworks and government consistent policy should stimulate active consumption of ICTs in everyday life.