Meeting of the Anti-Corruption Council on OGP

On April 14, 2014 Radisson Blu Iveria hosted the Inter-Agency Anti-corruption Coordination Council of Georgia (agenda). The meeting was chaired by the Minister of Justice of Georgia Thea Tsulukiani.

The meeting of the Inter-Agency Anti-corruption Coordination Council of Georgia was dedicated to Georgia’s participation in Open Government Partnership (OGP) and discussions about the draft Action Plan (2014-2015) of the Government of Georgia.

The meeting was conducted in several parts. During the first part of the meeting, head of the Analytical Department of Ministry of Justice, Secretary of the Council, Rapporteur of the Open Government Georgia Forum Rusudan Mikhelidze presented the draft of the 2014-2015 Action Plan and draft commitments that were already selected by government agencies. She also talked about Open Government Georgia Forum activities. The first part was followed by discussion.

The second part of the meeting was dedicated to presenting the public consultation process on OGP Action Plan. Ketevan Tsanava, National Coordinator of the Open Government Georgia Forum and Giorgi Kldiashvili,Rapporteur of the Open Government Georgia Forum (from Civil Society) and the Director of Institute for Development of Freedom of Information talked about the meetings that were held during the public consultation process and the recommendations that were identified during the meetings.

Head of the Data Exchange Agency Irakli Gvenetadze talked about Open Government Georgia Initiatives, the Open Data Portal and e-archives. While the representative of the Ministry of Justice Gvantsa Meunargia presented the achievements of the working group who is drafting the new Freedom of Information Act of Georgia. 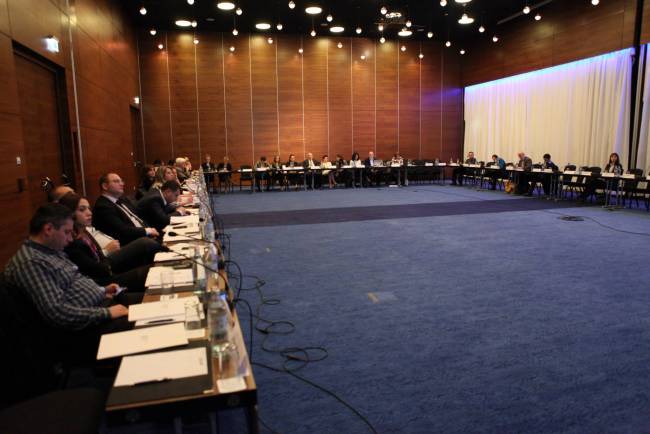 During the next part of the meeting, Rusudan Mikhelidze presented the annual activity report of the Anti-Corruption Council; Natalia Baratashvili,National Coordinator of the Anti-Corruption Activities talked about process of the anti-corruption strategy revision and elaboration of the Action Plan 2014-2016. Deputy Minister of Defense, Mikheil Darchiashvili concerned the issue of prevention of corruption in defense sector and NATO Building Integrity (BI) Program. This part of the meeting was followed by the discussion. Afterwards, Head of the Civil Service Bureau Ekaterine Kardava talked about the Civil Service Reform details.

As a result of the discussion, there was decided that the CSOs will submit their final recommendation on the Action Plan commitments in a short time period.

Meeting was finished with the creation of Ad Hoc working group (IDFI was selected as the Rapporteur of the First Working Group – “Openness, Access to Information and Civic Participation in Fighting against Corruption”) on implementation of international recommendations and closing remarks.