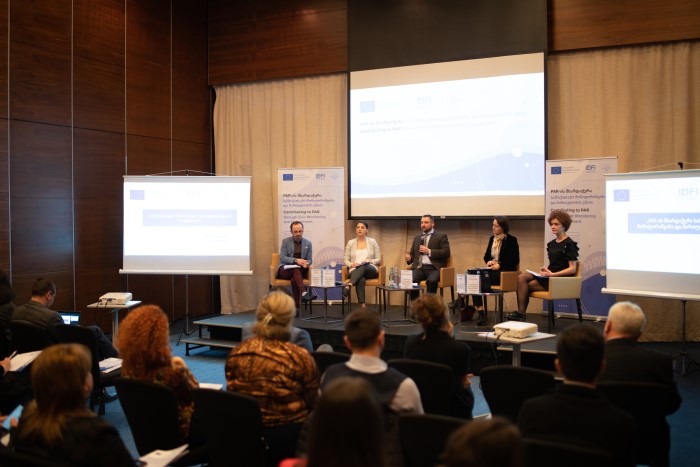 On December 17, The Institute for Development of Freedom of Information (IDFI) in partnership with the Georgian Young Lawyers’ Association (GYLA) with the support of the European Union (EU) launched the project “Contributing to PAR implementation through Civic Monitoring and Engagement”.

During the presentation were introduced challenges of PAR implementation and relevant project activities planned thereof.

Event participants were welcomed by Giorgi KLDIASHVILI – Executive Director of IDFI; and Colombe DE MERCEY – Team leader for Governance and Human Capital, Delegation of the European Union to Georgia.

"The main idea of the project is that by creating an online platform for monitoring PAR, CSOs which are part of the PAR Council will be equipped with an effective common monitoring tool, and other CSOs, not part of the process, with area-specific expertise, will be allowed to contribute to the reform. The PAR tracker will act as a bridging mechanism allowing target groups and beneficiaries to share their feedback and concerns with public institutions that are responsible for policymaking, service delivery, and PAR implementation.”– mentioned Giorgi KLDIASHVILI.

“The Government of Georgia recognises the strategic importance of Public Administration Reform (PAR) to its overall reform aspirations and to the effective implementation of the EU-Georgia Agreements. The Government has adopted several strategies addressing various aspects of the Public Administration Reform process, and has ensured the necessary internal monitoring of the reform.  However, to date, civil society contribution to it has lacked a systematic approach and a tool easy-to-use. As a part of this project a systemic and innovative approach to monitoring will help identify key bottlenecks facing the reform, and support a real evidence-based policymaking.” – said Colombe DE MERCEY.

- IDFI and GYLA will monitor the implementation of Public Administration Reform, with particular focus on 4 components: policy development, accountability, public finance management, and service delivery in order to identify the strengths and weaknesses of the implementation process, allowing for evidence-based revision. The assessment will serve as an alternative monitoring report, complementing and verifying the report of the GoG. Once unfulfilled commitments are identified, the project team will examine the principal reasons for failure and propose ways of addressing them.

- Monitoring and research results will be stored on this platform. For this purpose, IDFI will create an online monitoring platform - PAR Tracker that will grant the public and all interested stakeholders ready access to comprehensive information about PAR implementation, as well as means to engage in the monitoring process.

- GYLA will train 11 local CSOs in at least 6 cities in Georgia (Akhmeta, Batumi, Kutaisi, Zugdidi, Poti, and Marneuli), four of which have the self-governing status, while the fifth and sixth are populated by ethnic minorities (Muslim Kists in Akhmeta and Azerbaijanis in Marneuli).

- IDFI will study best practices on the most problematic issues identified by PAR Tracker and elaborate policy recommendations, which will be communicated to all relevant stakeholders and decision-makers through workshops and roundtable discussions.

The two-year project “Contributing to PAR implementation through Civic Monitoring and Engagement” has started in 2019 and will end in 2021. 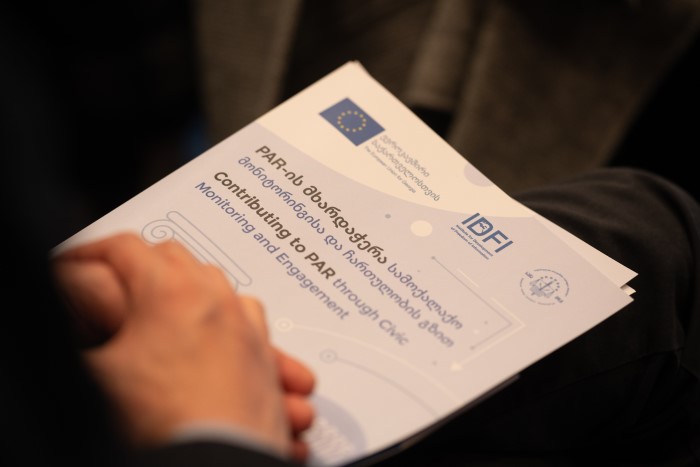