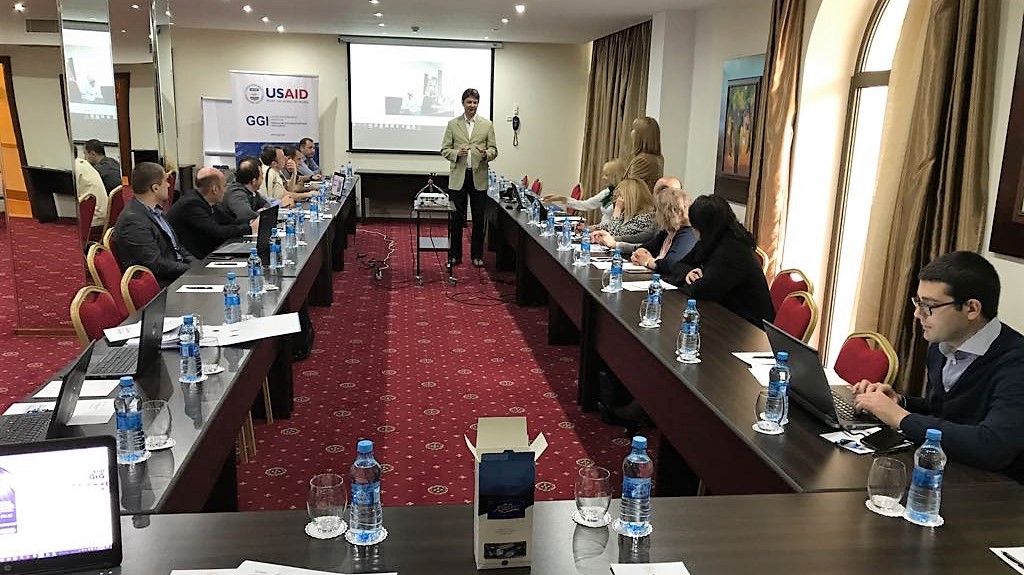 IDFI and Estonian e-Governance Academy (eGA) are implementing a joint project titled New E-Governance Initiatives to meet OGP Commitments in Georgia. The project has two components and aims to support central and local public institutions in implementing the 2016-2017 OGP National Action Plan. The project is supported by the United States Agency for International Development’s (USAID) Good Governance Initiative (GGI), and the Ministry of Foreign Affairs of Estonia.

The project is entirely focused on developing mechanisms of electronic governance. Therefore, it supports only those OGP commitments that deal with e-governance.

Together with IDFI, the project is implemented by eGA, one of the leading organizations working on e-governance in Estonia. Estonia is one of the world leaders in e-governance, due to reforms conducted in recent years.

The project involves IDFI and eGA helping various Georgian public intuitions in fulfilling OGP commitments under the National Action Plan. Namely, the project aims to create an electronic module of participatory budgeting in Batumi, Akhlatsikhe, and Kutaisi municipalities. In order to implement these mechanisms, IDFI evaluated the forms and quality of public participation  inBatumi, Akhlatsikhe, and Kutaisi municipalities. Following the findings of the study, eGA started to implement the Estonian VOLIS system in each partner municipality. Apart from supporting public participation in budgeting, the system includes various forms of public engagement in decision-making. The system also creates a transparent electronic space, where members of the municipal council as well as any registered citizen can participate and observe local processes.

In order to implement the system, a working meeting was held on May 16 in Kobuleti with the participation of Batumi, Akhlatsikhe, and Kutaisi municipality representatives. eGA conducted a training on system administration. Municipal council members and employees from public relations, finance and technical departments participated in the meeting.

The practical training was preceded by several working meetings (March 1-3, 2017) on the importance of e-governance and local needs. These meetings were held in Batumi, Kutaisi, and Akhaltsikhe and were mainly devoted to sharing of the Estonian experience and importance of e-governance in OGP. IDFI also presented a website, developed in the framework of its OSGF funded project. The creation of similar websites is planned for Batumi, Akhlatsikhe, and Kutaisi municipalities. The websites include modern mechanisms of electronic participation and e-transparency, and are based on best practices of running municipal portals. The implementation of these websites in partner municipalities is planned by December 2017.

The project is especially important  since it supports those public institutions (local government) that have not been previously involved in the National OGP Action Plan. Considering the fact that the implementation of OGP instruments on the local level is a recent development, it is necessary for all interested parties to be included, and all of the required resources and knowledge to be mobilized.

Supporting the Implementation of OGP Commitments at the Central Level

In addition to commitments on the local level, the project also includes IDFI and eGA supporting the Ministry of Finance in improving its electronic budgeting module. Currently, IDFI is evaluating the existing module. Afterwards, the organization will prepare a concept for a new module, where existing needs and best international practices will be included.

To implement this part of the project, IDFI conducted a working meeting on May 1 with the budget department from the Ministry of Finance, where the current budgeting module and related issues were discussed. The future module plans to take the Estonian experience into account.

IDFI and eGA also plan to help improve the patient portal of the Ministry of Health, Labor and Social Affairs. As with the Ministry of Finance, the existing portal will be evaluated, after which a concept for improvement and a technical assignment will be prepared. Relevant meetings with the Ministry have already been held.. IDFI plants to prepare the concept by  the beginning of 2018.