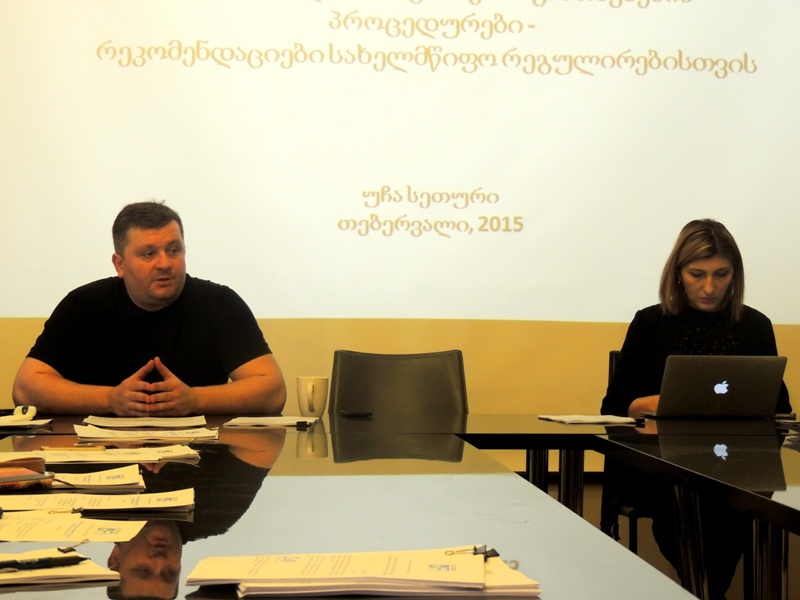 On February 5, Institute for development of Freedom of Information (IDFI) discussed relevant issues regarding digital switchover at the round table. Representatives of NGOs, Georgian National Communication Commission (GNCC), Digital Broadcasting Agency, media and companies who supposed to build network for DSO attended the meeting.

Head of IDFI Media and Telecommunications Ucha Seturi presented a study Recommendations for State Regulation of Rules of Admitting Broadcasters to Digital Broadcasting Network. He emphasised the regulations that should be presented in the course of broadcasters’ connection to multiplex network during the digital switchover process. Seturi made a review of international practice and mentioned the dual approach in this respect- first when a regulating body itself supervises the admittance to the network, and second when the issue of connection to multiplex is decided by the multiplex network operator.

The regional broadcasters plan to create a separate multiplex network. According to Executive Director of Georgian Association of Regional Broadcasters (GARB) Natia Kuprashvili, it hasn’t been decided when the network will be built so far, however, they would definitely manage to at least transmit their programs until the period of switchover to digital broadcasting, and regarding whether or not they will also transmit other broadcasters, and the tariff they will charge for the service, the issue hasn’t as yet been decided.

Ucha Seturi said that the preparation of amendment draft bill to the Law on Broadcasting is currently underway, but civil society is not involved in the process of its development. According to Head of GNCC Strategic Development Department Tiko Tkeshelashvili's speech, the Commission is also involved in the development of the given bill, and presentation of its initial version to the public and the further discussion will be began in the nearest future. The law is supposed to specify those obscure issues and ensure settlement of difficulties that emerge in the process of switchover to digital broadcasting.

Executive Director of Stereo+ Giorgi Khitarishvili also presented his report at the meeting. The company he represents is the one responsible for the building of multiplex networks for the national broadcasters. Khitarishvili said that Stereo+ had already brought equipment to 28 locations, where installation of transmitters is the only thing left to be done. It’s planned to create 46 such posts in total. Stereo+ has already launched testing and provides digital transmission of 8 channels in Tbilisi and its suburbs. According to Khitarishvili, everything goes in compliance with the plan, and all the works will have been completed by June 10, 2015.

Paata Aroshidze, Director General of VEZIRI LLC, a company responsible for the building of multiplex for the National Broadcaster(GPB), spoke about the activities planned and mentioned that they had procured the highest quality equipment for the building of the network. According to him, the work will be completed in the Kakheti region this week. The equipment is being delivered on almost a daily basis and 6 independent crews invited from Ukraine are involved in the construction of the network.

In the second part of the round table the participants discussed the importance of informing society in the course of the digital switchover process. Ucha Seturi submitted yet another research with reference to the topic. According to him, the high awareness of the population significantly determines the success of the process of switching over to the digital broadcasting platform. The Digital Broadcasting Agency’s strategy in terms of informing the society has not as yet been published. It’s important that the activities are attached to deadlines, so that the parties concerned are able to follow the development of each process, as well as for identification of the issues and their further elimination.

The agency has prepared promo videos and brochures, and has established a call center, but yet it would be a good thing if such centers would also be established in the regions. In this case the citizens will directly receive the letters with detailed clarification as to what processes are about to take place- Seturi added.

Seturi underlined the necessity to launch the process of preparing the society immediately, as digital broadcasting already exists in Tbilisi in the test mode and that the citizens interested have an opportunity to start preparation, test the equipment and purchase a set-top box- device for reception of digital signal.

In addition, the readiness index of population has to be created in order to measure at least twice its awareness regarding the switchover to digital broadcasting in May, 2015, and then in June, after the disconnection of the analogous signal.

“It’s necessary that a greater financial resource is allocated to the Digital Broadcasting Agency, in order for it to carry out the PR campaign more effectively”- Seturi stressed.

The meeting was also attended by representatives of the Digital Broadcasting Agency. The Agency’s press speaker Salome Gelashvili stated that 19 promo videos had been prepared, 15 of them have already been broadcasted on the GPB and Adjara TV, and that talks with commercial broadcasters were also underway.

The call center receives around 300 calls on a daily basis. The population shows interest both regarding the general process and technical details with reference to receivers, antennas and set-top boxes. The flyers are planned to be distributed together with payment receipts.

Natia Kuprashvili has proposed the Digital Broadcaster Agency to employ regional broadcasters in translating the promo videos into the languages of ethnical minorities, in order to prevent certain part of society being uninformed regarding the switchover to digital broadcasting.