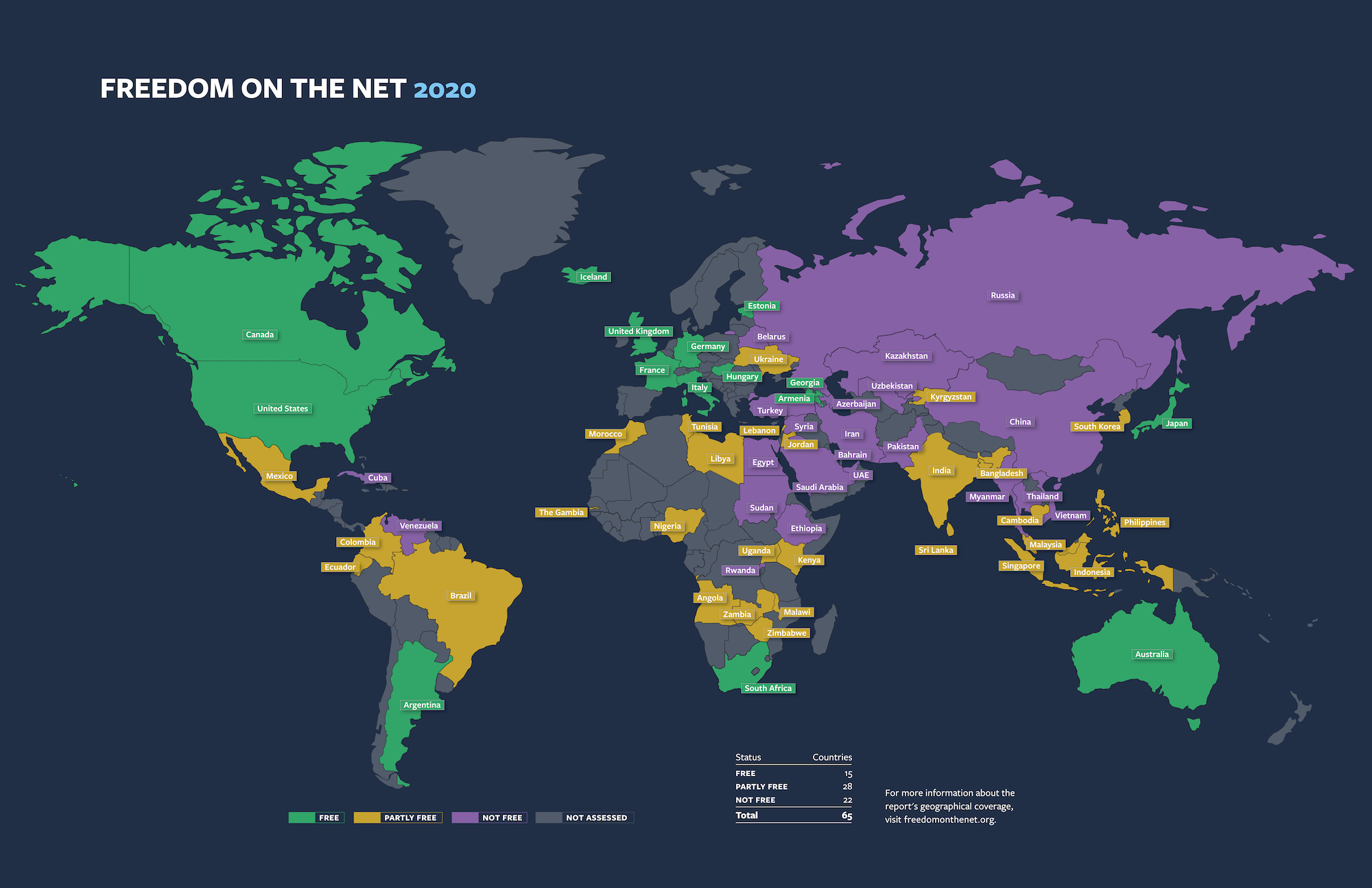 On October 14, 2020, Freedom House published an annual report on Internet freedom around the world. In 2020, Georgia obtained a score of 76 out of 100 and was assessed as “Free” in terms of Internet freedom. The country’s score improved by 1 point compared to 2019.

Among the key developments between June 2019 and May 2020, the following facts are highlighted:

- In October 2019, a large-scale cyber-attack on the websites, servers, and other management systems of up to 2,000 governmental, commercial, and media organizations.

- Controversial amendments to the Law of Georgia on Information Security, through which the State Security Service will be potentially provided access to a large amount of personal data.

- Declaration by the Constitutional Court of the provisions of the regulation of the Georgian National Communications Commission as unconstitutional, which obliged the Internet domain issuers to block the website in order to prevent the distribution of inadmissible products.

Compared to the previous year, the change in Georgia's score was observed in five components. In particular, due to the aforementioned large-scale cyber-attacks and manipulation of online content by domestic political actors and the increasing use of inauthentic accounts on social networks, a two-point decline was observed. However, the score was improved due to the decision made by the Constitutional Court, as well as given the fact that the deletion of online content and prosecution of protected online activists rarely happens.

According to the report, even though digital freedom is generally protected in Georgia, an increasing number of cyberattacks and domestic content manipulation was observed during the coverage period. Also, although rates of Internet access continue to grow, government initiatives aiming to develop Internet infrastructure are implemented with slow progress. Testing performed by the company Ookla in May 2020 showed that the average download speed for a fixed internet connection was 24.8 Mbps, which lags behind other countries in the region including Armenia, Russia, and Ukraine. While the average download speed for a mobile internet connection fell from 27.6 Mbps in May 2019 to 25.9 in May 2020.

The Freedom House report discusses the issue of the distribution of Internet users among several Internet service providers (ISPs). It is argued that the ICT market is dominated by a handful of large companies. Two private ISPs control more than three-fourths of the fixed broadband market, while the mobile Internet market is also dominated by three main providers.

Concerning the performance of the Georgian National Communications Commission (GNCC), the main regulatory body for the telecommunications sector, it is noted that no politicized decisions related to ICT regulation were made until the report coverage period (until May, 2020). However, it is mentioned that GNCC encountered criticism for its refusal to disclose public data on the activities and expenditures of its newly established Media Academy.

Regarding the level of Internet freedom in the country, the report argues that online users can freely use social networks for disseminating information, mobilizing people for a common cause, and waging online campaigns. However, the report refers to the fact of dismissal of journalists from Adjara TV, a public broadcaster, for critical Facebook posts about the channel.

In addition, as mentioned before, the recent trend of online content manipulation has negatively affected the country’s overall performance. The report says that during the reporting period, the government and other domestic political actors sought to influence public opinion by manipulating online content, especially during political crises. According to the report, Georgia's online audience also became the object of a Russian disinformation campaign. As evidence, several examples are given:  In April 2020, Facebook removed a series of accounts and pages linked to a bogus media outlet operated by pro-Russian groups. Before that, in January 2019, Facebook removed several inauthentic Georgia-focused accounts and pages originating in Russia. Also, the Russian government and Russian-sponsored actors circulated disinformation about the U.S. government-supported research center, Lugar Laboratory, especially since the COVID-19 pandemic began.

Evaluation of each country includes a detailed narrative report and a numerical score based on three categories: an obstacle to access, limits on content, and violations of user rights. The 2020 report covers the period between June 2019 and May 2020.

It is noteworthy, that IDFI’s Internet Direction  Head has been engaged in Freedom House’s Freedom on the Net (FOTN) program since 2014 and has been participating in the preparation of the report on Georgia’s state of Internet freedom.

The detailed report is available here.