In 2020 Georgia was mentioned in the rankings of several international organizations. Most of them indicate that corruption situation in the country is worsening with high-level corruption being mentioned as one of the causes. The analysis of the rankings reveals that the progress made years ago by the country in the fight against corruption is mostly stalled or reduced. In the direction of business bribery, it should be noted that businesses have low expectation of the need to pay bribes, however, the situation is unfavorable in terms of preventing corruption risks related to business.

Legislative branch of power remains the least free from corruption in Georgia, and the police and army are the most free of corruption.

The perception of corruption in the society is gradually increasing, the possible reasons for which are named the abuse of state resources for electoral purposes, the lack of transparency in the financing of political parties, the concentration of state power in the hands of a private person, etc.

According to international indexes, Georgia has succeeded in fighting petty corruption, but high-level corruption involving officials in the country remains a problem. Significant efforts are to be made in terms of Government good faith and the efficiency of the judiciary.

The 2020 results reaffirm the importance of the independence of anticorruption agencies for ensuring an effective fight against corruption, accountability, high degree of transparency and, consequently, high public confidence. 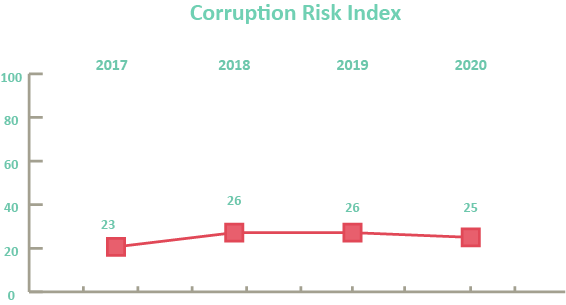 The TRACE Bribery Risk Matrix both conveys and captures the multidimensional nature of bribery by using four separate risk domains, each composed of two or three subdomains:

DOMAIN 1: OPPORTUNITY (overall opportunity risks in Georgia - 17) – considers business interactions with the Government, expectation of paying bribes to the government and regulatory burden. Out of the four assessed domains, the lowest corruption risk in Georgia was observed in this direction and Georgia was ranked 17th among 194 countries with the risk score of 17 out of 100.

DOMAIN 2: DETERRENCE (overall Deterrence Risk in Georgia - 39) – considers societal disapproval of bribery and governmental anti-bribery enforcement. In this regard, Georgia's corruption risk rate is the highest among the four domains. In this direction Georgia was ranked 47th among 194 countries with the risk score of 39 out of 100.

DOMAIN 3: TRANSPARENCY (overall Transparency Risk in Georgia - 26) – considers transparency of governmental regulatory functions, transparency and health of the civil service sector. In this direction Georgia was ranked 31st among 194 countries with the risk score of 26 out of 100.

DOMAIN 4: OVERSIGHT (Overall Oversight Risk - 28) – considers capacity (human resources and etc.) for civil society oversight, civic engagement, quality and freedom of media. In this direction Georgia was ranked 55th among 194 countries with the risk score of 28 out of 100.

Out of these four domains Georgia has the lowest score (17) in terms of OPPORTUNITY meaning that the lowest risk exists exactly in this direction. The highest risk exists and, consequently, with the highest score (39) was evaluated the direction of DETTERENCE. As for the domains of TRANSPARENCY and OVERSIGHT, both were rated almost equally (respectively, 26 and 28). 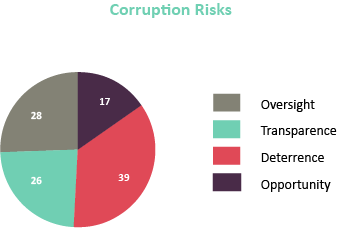 In the neighboring countries of Georgia and Eastern European region the Czech Republic received the best score ranking 38th in the international ranking. The highest risk was recorded in Azerbaijan, which ranked 136th.

According to 2019 Rule of Law index by World Justice Project (WJP) in 2020 Georgia was ranked 42nd out of 128 countries with the score of 0.60 out of 1 with 1 indicating the strongest adherence to the rule of law and on the 27th place, with the score 0.68 in absence of corruption dimension.

The World Justice Project (WJP) Rule of Law Index 2020 is the latest report in an annual series measuring the rule of law based on the experiences and perceptions of the general public and in-country experts worldwide.The WJP Rule of Law Index 2020 presents a portrait of the rule of law in 128 countries by providing scores and rankings based on eight factors which includes absence of corruption.

Four branches of the government were assessed in terms of absence of corruption. The legislative authority of Georgia was considered as the least free from corruption and therefore was rated the lowest (0.51). Police and army were regarded as the mostly free institutions from corruption with the score 0.89. The judiciary received 0.73 points and the executive branch – 0.60. 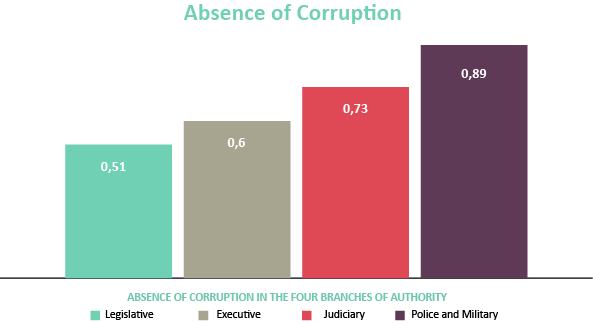 In the neighboring countries of Georgia and Eastern European region the Czech Republic received the best score (0.73) ranking 18th in the international ranking. Turkey ranks 107th with the lowest rating (0.43).

According to 2019 Corruption Perception Index published in January 2020 by Transparency International Georgia was ranked 44th out of 180 countries with the score of 56. The index is worsened compared to the previous year as in 2018 Georgia was on the 41st place with the score 58. 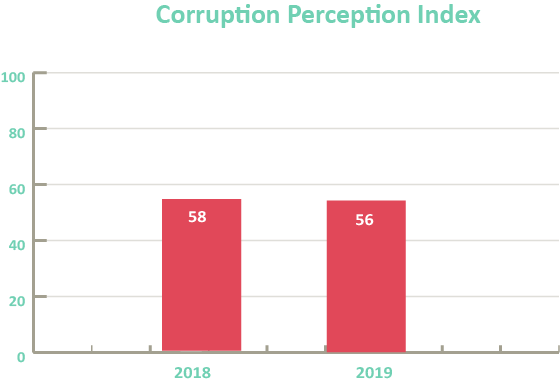 The Corruption Perceptions Index (CPI) aggregates data from a number of different sources that provide perceptions by business people and country experts of the level of corruption in the public sector. The CPI uses a scale from 0 to 100 where 100 is very clean and 0 is highly corrupt. The average score is 43/100. The average regional score for Eastern Europe and Central Asia is 35.

The best results have been acquired and thus, top ten countries in the world according to the CPI are Denmark, New Zealand, Finland, Singapore, Sweden, Switzerland, Norway, Netherlands, Germany and Luxembourg.

Based on the CPI across the region of Eastern Europe and Central Asia, to which Georgia also belongs, countries experience limited separation of powers, abuse of state resources for electoral purposes, opaque political party financing and conflicts of interest. The concentration of power in private hands remain a major obstacle in the region.

The Index of Economic Freedom focuses on four key aspects of the economic and entrepreneurial environment over which governments typically exercise policy control: Rule of law, Government size, Regulatory efficiency and Market openness.

Based on the Index of Economic Freedom Georgia’s overall score has increased by 1.2 points with noticeable improvements on all indicators related to the rule of law (Property Rights, Judicial Effectiveness, Government Integrity). It is noteworthy that in 2019 a sharp drop in judicial effectiveness, lower scores on government integrity and monetary freedom exceeding a big gain in financial freedom were named as reasons for decreasing the score. 2020 analysis noted that even though Georgia has made great progress in fighting petty corruption, high-level corruption by public officials remains a problem. It further notes that a top-10 ranking will require even more intensive efforts to improve perceptions of government integrity and judicial effectiveness. A good first step to avoid controversies over judicial appointments would be legislative action to protect the independence of the judiciary. It is noteworthy that the problem of “elite corruption” was also highlighted by the organization in the 2019 analysis.

Georgia is a leader among EaP countries in terms of controlling corruption and is on the 15th place among EU countries showing a better result than the countries such as the Czech Republic, Slovakia, Poland, Italy, Latvia, Croatia and others.

WGI ranking covers 214 countries worldwide. Participant countries are assessed on the scale of 0-100% in six directions (Voice and Accountability, Political Stability and Absence of Violence, Government Effectiveness, Regulatory Quality, Rule of Law, Control of Corruption) where Control of Corruption is one of the directions. This area captures the perception of both petty and elite forms of corruption and of the extent to which public power is exercised for private gain. Control of corruption is on the third place among six directions assesses in 2019 in Georgia – regulatory quality and government effectiveness on the first two places. 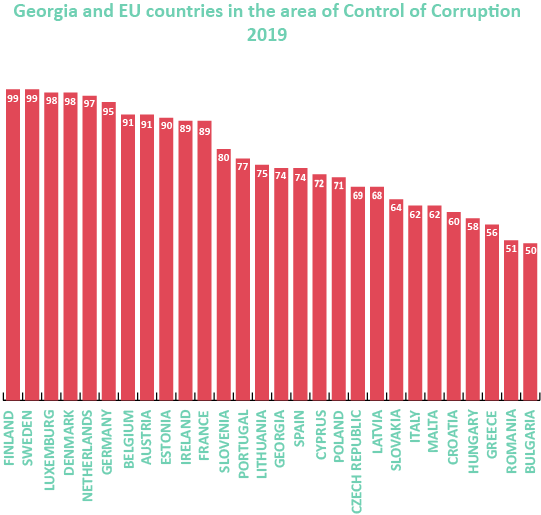 Georgia obtained the highest assessment in World Governance Indicators in 2013-2014. During this period especially noticeable was Georgia’s progress in the areas of Rule of Law and Control of Corruption. According to the World Governance Indicators, the pace of the county’s development significantly slowed down since 2014. According to the latest assessment of the World Bank, Georgia has advanced in the area of Government Effectiveness, however, regress was detected in all of the rest five directions. In addition, Georgia was able to return to 2014 results in 2018 in the area of control of corruption and in 2019 its score reduced again. 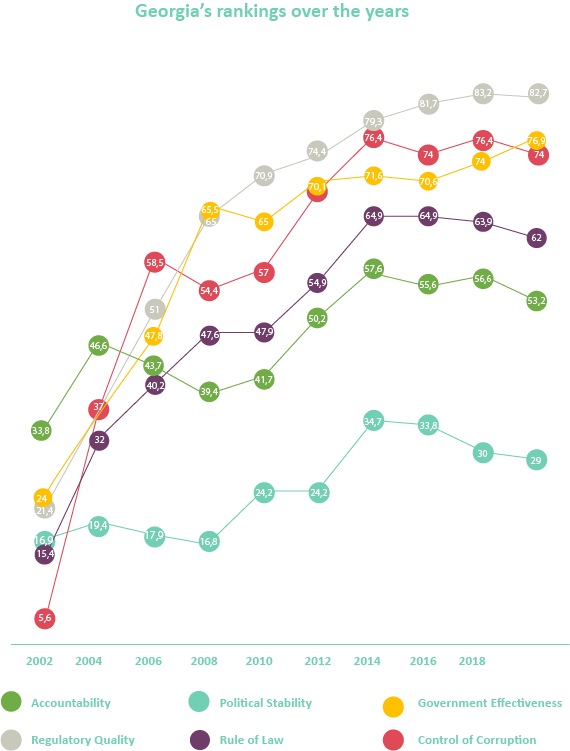 IDFI once again emphasizes that the independence of state agencies tasked with combating corruption is one of the most important standards set by international treaties, conventions, guidelines and recommendations. Independence of these agencies can ensure the effectiveness of combating corruption, accountability, high level of transparency and, therefore, high level of public trust.

Analysis of the practice of combating corruption in Georgia shows that the independence of the agencies fighting against corruption is the most challenging. IDFI has been highlighting the deficiencies in the existing Anti-Corruption system for a long time in various formats.

Furthermore, European Parliament Resolution underlined that the high-level corruption constitutes a serious problem in the country. The same is mentioned in the International Transparency research on Anti-Corruption mechanisms in eastern European and central Asian countries. According to the research, Georgian authorities have not established independent Anti-Corruption agency despite the need to do so.

Therefore, IDFI considers it necessary to create an Independent Anti-Corruption Agency equipped with high degree of independence, relevant power and public trust to investigate high-level corruption cases and answer all of the legitimate questions.

IDFI believes that in order to prevent corruption, it is of utmost importance for Georgia to fully comply with the recommendations of international anticorruption institutions. According to the latest compliance report of the Council of Europe’s Group of States against Corruption 70% of the recommendations with regards to the prevention of Corruption have not been fully implemented by Georgia.