Most of the Anti-Corruption rankings published by international organizations in 2021 indicate that corruption situation in Georgia is worsening. 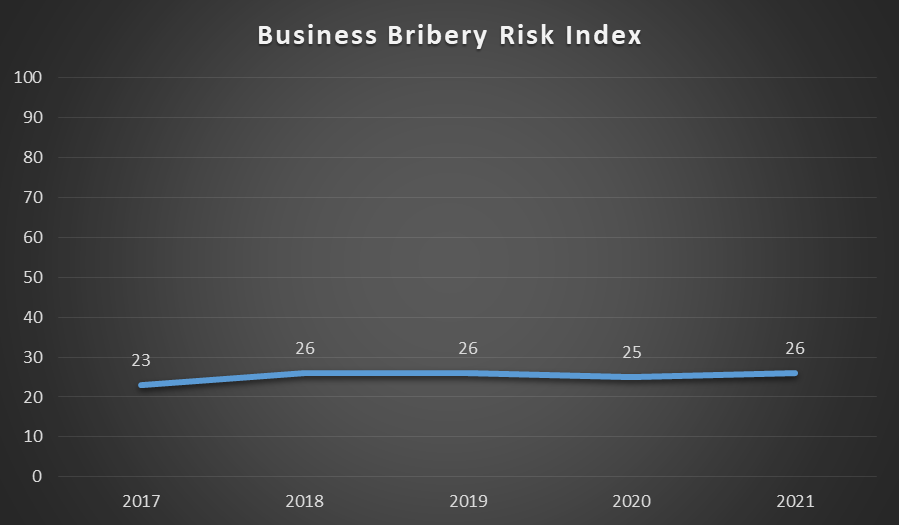 At the international level the lowest risk of corruption in business is detected in Denmark, so with two points it stands first in the ranking. The highest risk of business bribery was revealed in North Korea, which ranks last - 194th with 94 points.

The TRACE Bribery Risk Matrix examines the nature of corruption in the following four areas:

DOMAIN 1: OPPORTUNITY - considers the business interaction with the government, the expectation of paying a bribe to the government and the burden of regulation. It should be noted that in INTERACTION - one out of the three components of OPPORTUNITY domain - Georgia received the best score of 1 and took the first place in the component. Overall, Georgia has 19 points in this domain. Out of the four directions assessed, in Georgia, the lowest corruption risk was observed in this domain. However, it is noteworthy that this indicator is worsened compared to 2020, when Georgia had 17 points.

DOMAIN 2: DETERRENCE - refers to the Anti-Corruption policy pursued by the government and the public's attitude towards bribery. Although, compared to the previous year, out of the four areas assessed, Georgia showed a slightly improved rate only in deterrence, the country’s corruption risk index in this direction still is the highest among the four domains. It is evaluated with 38 points. In 2020 Georgia had 39 points in this domain.

DOMAIN 4: OVERSIGHT - considers the quality of media and its freedom as well as the involvement of the public. In this direction, Georgia has 29 points. In 2020 the country was assessed with 28 points in this domain.

According to the Business Bribery Risk Index 2021 by Trace International, top five countries with the lowest corruption risks are Denmark, Norway, Sweden, Finland, and New Zealand. As for Georgia's neighboring countries and the region of Eastern Europe, the Czech Republic received the best score and took the 39th place with 31 points, while the highest risk was observed in Belarus. With 58 points Belarus ranked 144th in the international ranking.

The World Justice Project (WJP) Rule of Law Index 2021 is the latest report in an annual series measuring the rule of law based on the experiences and perceptions of the general public and in-country experts worldwide. Countries are assessed based on eight factors which includes absence of corruption. Countries are rated on a 0 to 1 point scale, with one point being the best score.

Four branches of the government were assessed in terms of absence of corruption. The legislative authority of Georgia was considered as the least free from corruption and therefore was rated the lowest (0.51). Police and military were regarded as the most free institutions from corruption with the score 0.89. The judiciary received 0.72 points and the executive branch – 0.58. The legislative branch and police/military had the same evaluation in 2020 as well, while the assessment of the judiciary and the executive branches slightly deteriorated by 0.01 and 0.02 points, respectively.

According to the WJP top ten countries with the best results are Denmark, Norway, Finland, Sweden, Germany, the Netherlands, New Zealand, Luxembourg, Austria, and Ireland.

In the neighboring countries of Georgia and Eastern European region the Czech Republic received the best score (0.73) ranking 22nd in the international ranking, while Turkey ranks 117th with the lowest score (0.42).

The Corruption Perceptions Index (CPI) aggregates data from a number of different sources that provide perceptions by entrepreneurs and experts of the level of corruption in the public sector. The CPI uses a scale from 0 to 100 where 100 is very clean and 0 is highly corrupt. The average score in international ranking is 43. The average regional score for Eastern Europe and Central Asia is 36.

The best results have been acquired and thus, top ten countries in the world according to the CPI are Denmark, New Zealand, Finland, Singapore, Sweden, Switzerland, Norway, the Netherlands, Germany and Luxembourg.

Based on the CPI across the region of Eastern Europe and Central Asia, to which Georgia also belongs, COVID-19 exposed ongoing governance and structural problems, highlighted widespread corruption, and exacerbated social discontent. Some political leaders used the crisis to increase their power, add restrictions to already limited access to information, eliminate transparency requirements from public procurement rules and renounce public accountability mechanisms. The report says that COVID-19 provided corrupt and authoritarian leaders with an excuse to reduce oversight of government spending and curtail civil liberties, which, in the end, negatively affects the quality of democracy.

The Index of Economic Freedom focuses on four key aspects of the economic and entrepreneurial environment over which governments typically exercise policy control: Rule of law, Government size, Regulatory Efficiency and Open Market.

Based on the Index of Economic Freedom Georgia’s slight increase in country’s overall score (by 0.1 point), was primarily caused by an improvement in the government spending score. It is noteworthy that in 2020 Significant rise of Georgia’s ranking was based on the improvement in all indicators of the rule of law (property rights, judicial effectiveness, government integrity). However, according to 2021 analysis out of these three dimensions decrease in points is observed in property rights and government integrity. According to the organization, interference in the courts by the executive and legislative branches remains a problem. Herewith, even though Georgia has made great progress in fighting petty corruption, high-level corruption by public officials is still problematic. It further notes that a top-10 ranking will require even more intensive efforts to improve perceptions of government integrity and judicial effectiveness. It is noteworthy that the problem of high-level corruption was also highlighted by the organization in 2019 and 2020 analyses.

According to the World Bank Worldwide Governance Indicators [6] (WGI) Georgia is a leader among EaP countries in terms of Controlling Corruption and is on the 18th place among the EU countries showing a better result than the countries such as the Czech Republic, Italy, Slovakia, Cyprus, Malta, Croatia and others.

WGI ranking covers 214 countries worldwide. Participant countries are assessed on the scale of 0-100% in six directions (Voice and Accountability, Political Stability and Absence of Violence, Government Effectiveness, Regulatory Quality, Rule of Law, Control of Corruption) where Control of Corruption is one of the directions. The dimension of Control of Corruption captures perceptions of the extent to which public power is exercised for private gain, including both petty and grand forms of corruption, as well as "capture" of the state by elites and private interests. Control of corruption is on the third place among six dimensions assessed in 2020 – it is preceded by the Regulatory Quality and Government Effectiveness dimensions. In 2020 the ranking of Georgia (71.63%) in this direction worsened compared to the previous year  (75%), as well as compared to 2014 (76.44%). The 2020 assessment is the lowest indicator assigned to Georgia in this direction after 2013.

Georgia obtained the highest assessment in Worldwide Governance Indicators in 2014. Prior to this period indicators demonstrated steady and rapid development of Georgia. Especially noticeable was Georgia’s progress in the areas of Rule of Law and Control of Corruption. According to the Worldwide Governance Indicators, the pace of the county’s development significantly slowed down since 2014. According to the latest assessment of the World Bank, Georgia showed the highest result in the area of Regulatory Quality compared to previous years, however, regress was detected in all the rest five directions. Herewith, instead of improving the previous years’ rankings Georgia was able to only return to 2014 results in 2018 in the area of control of corruption and gradually deteriorated the score in 2019 and 2020.

In order to respond the existing challenges, it is important for Georgia to renew the functioning of the Anti-Corruption Council, to adhere to the recommendations of international Anti-Corruption institutions, to pay more attention to the fight against corruption, to take into consideration the challenges identified in these areas, develop effective policy documents in a timely manner and undertake ambitious commitments within these strategic documents to make relevant changes.

Taking into account Georgia’s worsened Anti-Corruption indicators it is alarming that new Anti-Corruption Action Plan, which is to define the commitments of the public agencies to be carried out in 2021-2022 - is not developed yet in the end of 2021,  the relevant strategy is not updated, and information on the progress of these processes is not published. It is noteworthy that Georgia’s implementation of Anti-Corruption recommendations issued by international organizations is characterized by low progress that clearly indicates a transition to a passive phase in the fight against corruption in the country.Considering this, it has to be mentioned that hindering the OECD/ACN report on Anti-Corruption environment by the Government of Georgia is particularly alarming.

Therefore, IDFI considers it necessary to create an Independent Anti-Corruption Agency equipped with high degree of independence, relevant power and public trust to investigate high-level corruption cases and answer all the legitimate questions.