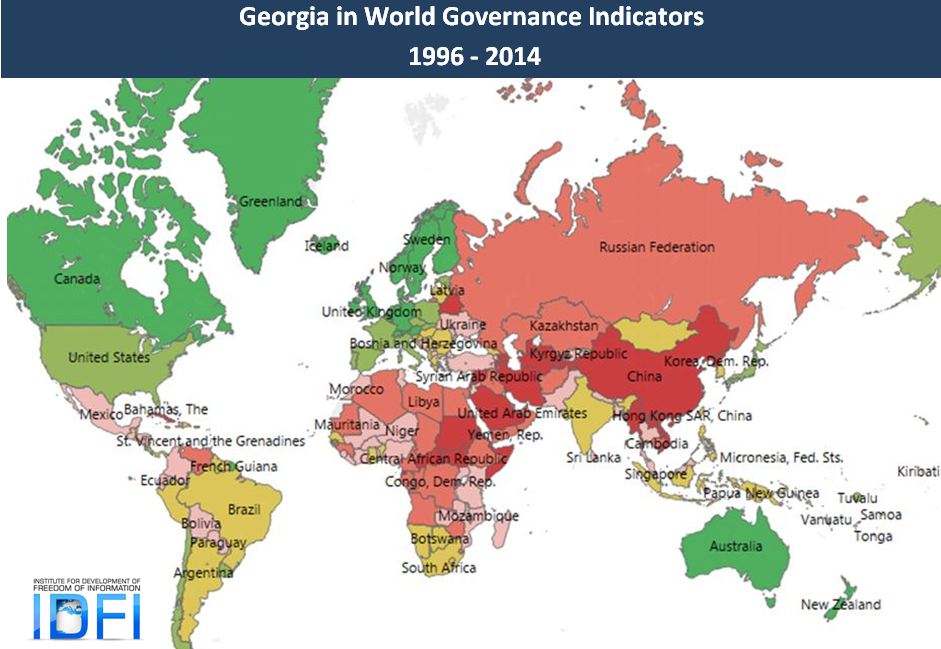 Governance consists of the traditions and institutions by which authority in a country is exercised. This includes the process by which governments are selected, monitored and replaced; the capacity of the government to effectively formulate and implement sound policies; and the respect of citizens and the state for the institutions that govern economic and social interactions among them. The Worldwide Governance Indicators (WGI) are utilized to evaluate the different dimensions of governance, by the categories of: Freedom of Expression and Accountability, Political Stability and Absence of Violence/Terrorism, Government Effectiveness, Regulatory Quality, Rule of Law and Control of Corruption.

The Worldwide Governance Indicators is a research database which is entirely based on various global ratings and reports (e.g. Freedom House, IREX Media Sustainability Index, Open Budget Index, World Justice Report, etc. In total, 32 individual data sources). The data is gathered from a number of survey institutes, think tanks, non-governmental organizations, international organizations, and private sector firms. A new common indicator is obtained by aggregating the global ratings mentioned above. The Worldwide Governance Indicators (WGI) are used to evaluate 215 countries of the world. The given research covers the period from 1996 to 2014. The principal six indicators for evaluating countries are the following:

2. Political Stability and Absence of Violence/Terrorism - measures perceptions of the likelihood of political instability and/or politically motivated violence, including terrorism.

3. Government Effectiveness - measures perceptions of the quality of public services, the quality of civil service and the degree of its independence from political pressures.

4. Regulatory Quality - captures perceptions of the ability of the government to formulate and implement policies and regulations for promoting the private sector development.

5. Rule of Law - captures perceptions of the extent to which agents have confidence in and abide by the rules of society, trust in the court and the likelihood of crime and violence.

6. Control of Corruption - captures perceptions of the extent to which public power is exercised for private gain, including both petty and elite corruption, as well as "capture" of the state by elites and private interests.

The WGI are a research dataset initiated by Daniel Kaufmann (Natural Resource Governance Institute and Brookings Institution) and Aart Kraay (World Bank Development Research Group) in 1999. Pablo Zoido and Massimo Mastruzzi also made major contributions to the development and updating of the WGI.

The WGI do not reflect the official views of the Natural Resource Governance Institute, the Brookings Institutions, the World Bank, its Executive Directors, or the countries they represent. The WGI are not used by the World Bank Group to allocate resources.

Regarding Georgia in the World Governance Indicators, it should be noted that, from 1996 to 2014, the country has made considerable progress in all six dimensions. Particularly significant improvements were achieved in the dimensions of the fight against corruption, rule of law, regulatory quality and good governance. 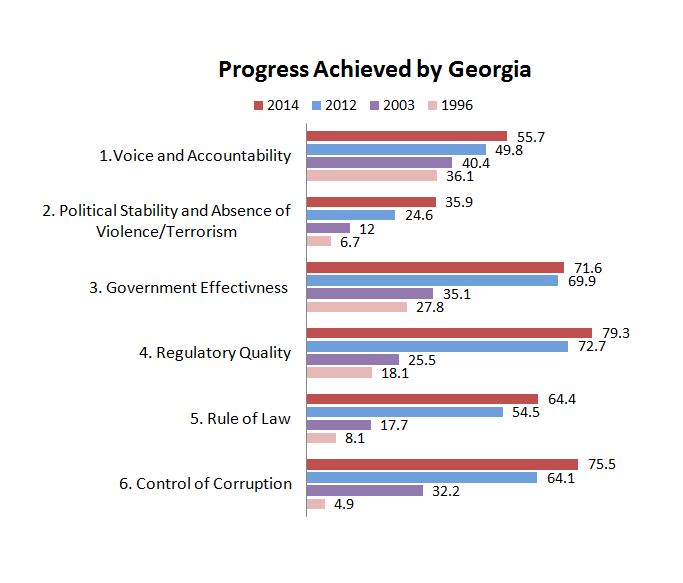 As for the year of 2014, Georgia was assessed with the highest rates in the dimensions of Control of Corruption (75.5%) and Regulatory Quality (79.3%), while the lowest rate was granted for Political Stability and Absence of Violence/Terrorism (35.9%). 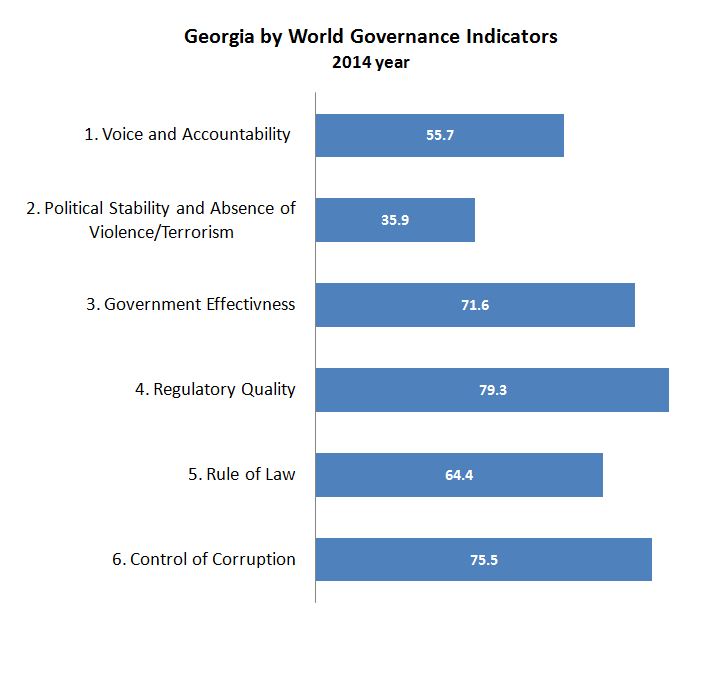 Based on the research we can conclude that Georgia has achieved considerable progress in every six governance indicator during the period of 1996-2014. Georgia is the first worldwide in regards with the progress made in the fight against corruption and regulatory quality (which captures perceptions of the ability of the government to formulate and implement policies and regulations for promoting the private sector development). Based on the progress made during the years of 1996 and 2014 Georgia is the second worldwide in the indicators of Government Effectiveness and Rule of Law.

The comparison of Georgia with its neighboring countries gave clear picture according to which Georgia is the first in regards with the progress made in every six indicator on regional scale.

It should also be emphasized that in number of indicators Georgia stands higher in the rating than some of the central and Southern European Countries such as: The Czech Republic, Slovakia, Italy, Greece, Macedonia, Hungary, Bulgaria and etc.

Georgia is on the leading position in international rating such as Open Government Index published by the World Justice Project (WJP) in March 2015. According to the Open Government Index, Georgia has scored 0.61 points out of total 1 and therefore, has been ranked 1st out of 13 countries in Eastern Europe and Central Asia region and 29th out of 102 countries in the world in terms of open government. Based on these results Georgia has outperformed Slovenia, Macedonia, Greece and Croatia. The highest level of open government index was received by countries like Sweden, New Zeeland, Norway, Denmark and The Netherlands.

Georgia is actively involved in Open Government Partnership (OGP) Initiative. Precisely, in 2014 Georgia was elected in OGP Steering Committee. Georgia represents one of the outstanding countries in regards with obligation undertaken and fulfilled by executive and judiciary branches of the government. In the Action Plan for 2014-2015 Georgia has undertaken the responsibility to implement important reforms, which will guarantee that the country is further developed in the spheres such as: Access to public information, citizen involvement, conflict of interests, accessibility of public services, system of asset declarations and etc.

All the abovementioned is clearly implying that regardless of existing internal problems as well as potential external threats faced by the country, at the international level Georgia is perceived as one of the fastest developing states. Nonetheless it is crucial that the trend of developing is sustained. IDFI hopes that Georgia will further follow the trend of development which will be reflected in the upcoming Worldwide Governance Indicators.