On 26th of March, the World Justice Project (WJP) has launched Open Government Index 2015 involving a lot of famous researchers, experts and organizations. According to the Open Government Index, Georgia has scored 0.61 out of 1 and therefore, has been ranked 1st out of 13 countries in Eastern Europe and Central Asia region and 29th out of 102 countries in the world in terms of open government.

The scores ranged from 0 to 1, with 1 indicating the greatest openness.

Based on these results Georgia has outperformed Slovenia, Macedonia, Greece and Croatia. The highest level of open government index was received by countries like Sweden, New Zeeland, Norway, Denmark and The Netherlands.

Georgia’s result was based on answers drawn from a representative sample of 1,000 respondents in the country’s three largest cities, Tbilisi, Batumi and Kutaisi, as well as a set of in-country practitioners and academics.

The WJP Open Government Index 2015 scored countries on four dimensions of government openness:
• Publicised laws and government data – measures the quality and accessibility of information published by the government in print or online (i.e. active transparency), and whether administrative regulations, drafts of legislation, administrative decisions, and high court decisions are made accessible to the public in a timely manner.
• Right to information – Measures whether the government provides public information in a timely manner and completely, whether people are aware of their right to information and if requests for information are granted at a reasonable cost
• Civic participation – measures the possibility of citizens to assemble for common goals, organize peaceful demonstrations, and assess government policies, sign petitions and voice concerns about government activities, as well as opportunities for citizen feedback.
• Complaint mechanisms – measures whether people are able to bring specific complaints to the government about the provision of public services or the performance of government officers in carrying out their legal duties, and how government officials respond to such complaints. 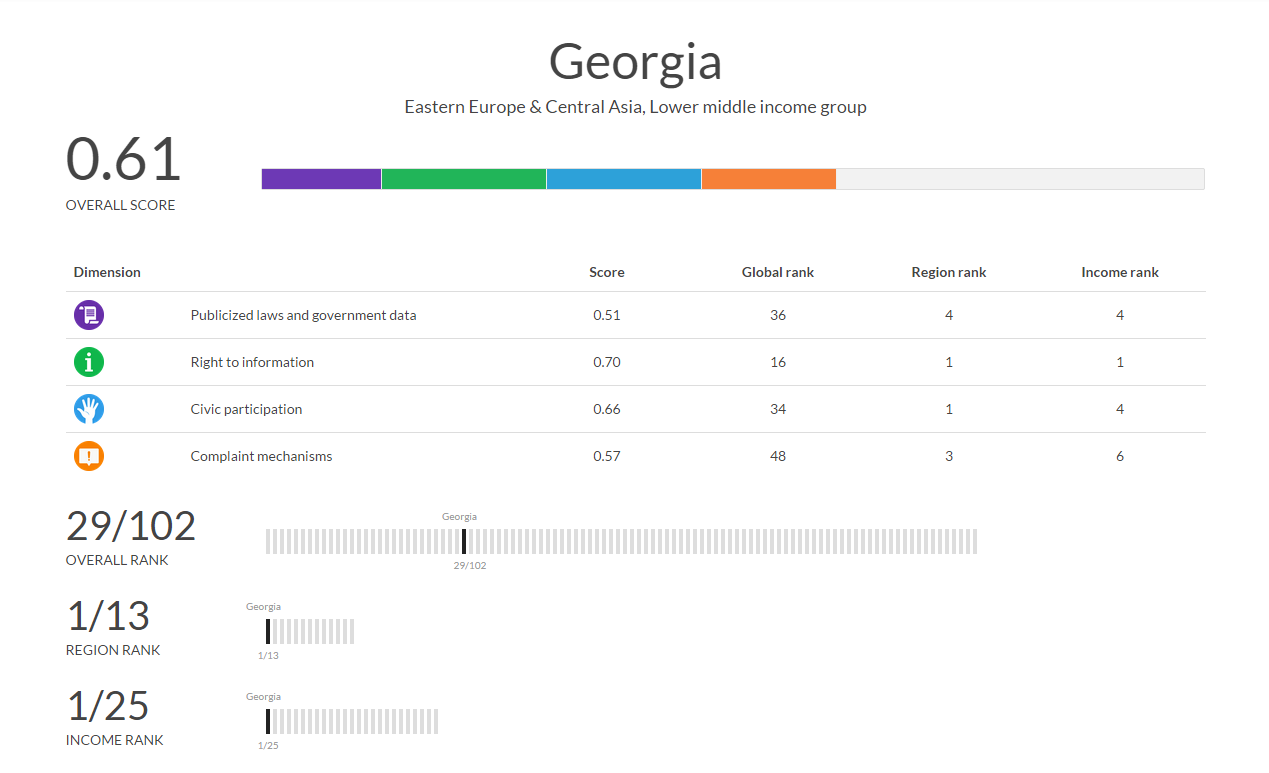 The following aspects have been considered within the first dimension “Publicized laws and government data” of the WJP Open Government Index: informing the citizens about budget expenses and citizens’ rights, as well as the quality, amount and reliability of information published by the state institutions. According to the result, Georgian citizens evaluated the scal, quality and reliability of the information published by the Government quite highly. Despite such positive trends, according to the survey, 39% thinks that the Government provides sufficient information. The average score in this sense in Eastern Europe and Central Asian constitutes amounts to 44%. The score of access to information on budget expenses was even lower. The question, how well does the government provide information on the state expenses, was positively answered by 32% of respondents. 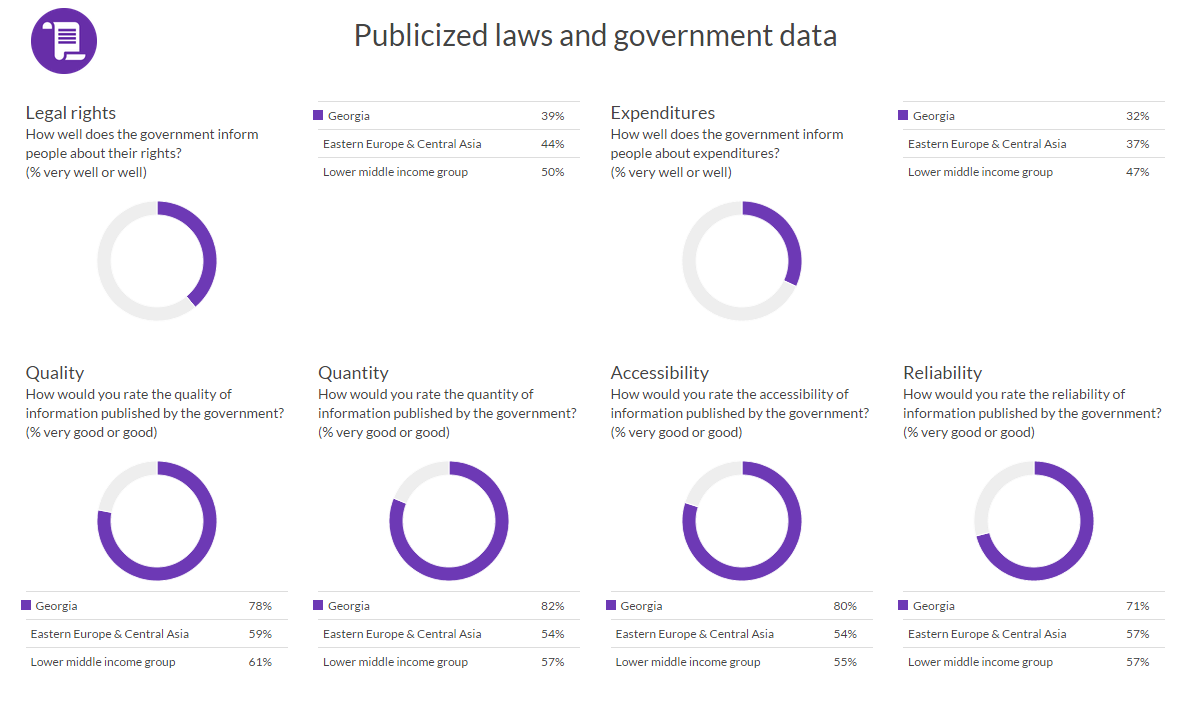 The third dimension civic participation measures the effectiveness of civic participation mechanisms, including protection of the freedoms of opinion and expression, and assembly and association, and the right to petition the government. It also measures whether people can voice concerns to various government officers and members of the legislature, and whether government officials provide sufficient information and notice about decisions affecting the community, including opportunities for citizen feedback. The majority of Georgian population claim that politicians can freely express any opinion against current government and authorities (93%), everyone has the free choice of joining any political party (93%) and express his or her opinion by signing the petition (91%).

Relatively fewer respondents (83%) claim that the media (TV, Radio, Newspapers) freely assess the government activities. The same number of respondents believes that representatives of civil society can freely evaluate government policies. Although 83% of respondents claim that communication is with local authorities is easy, the number of citizens saying that communication with local authorities and citizens before decision-making is effective, is lower and constitutes only 32% in total. 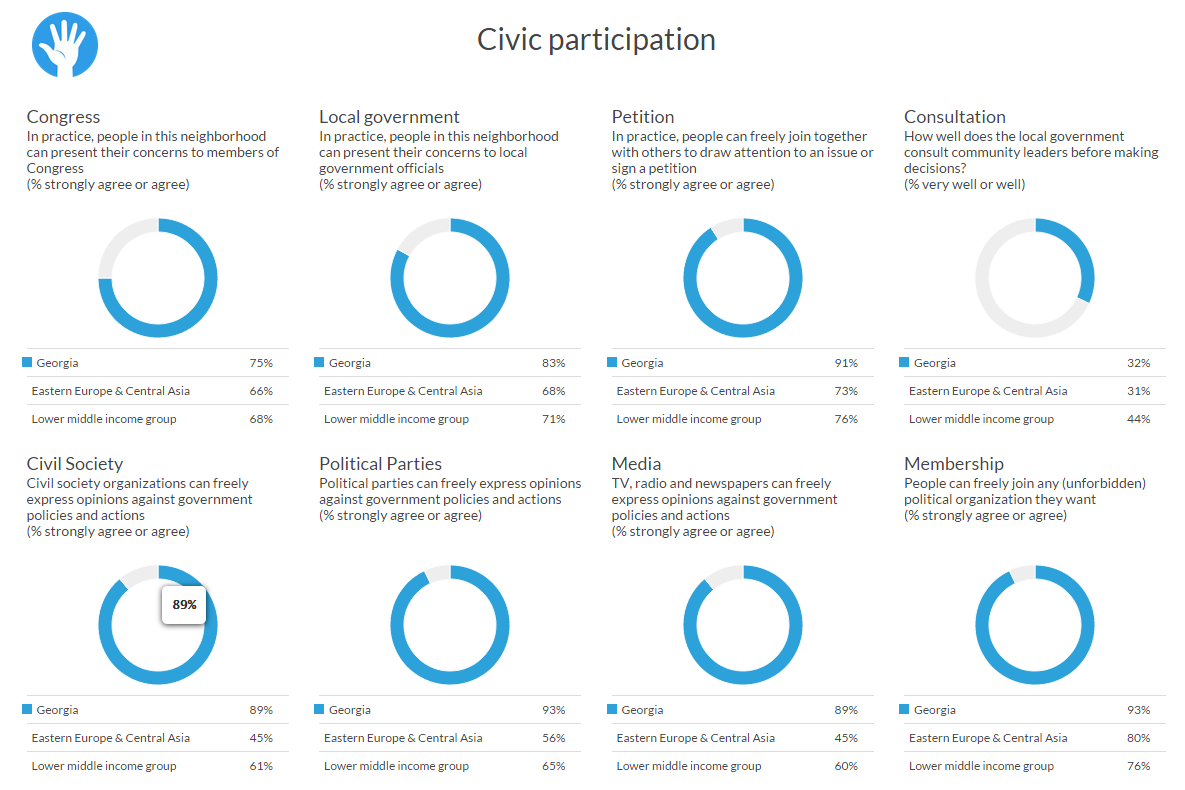 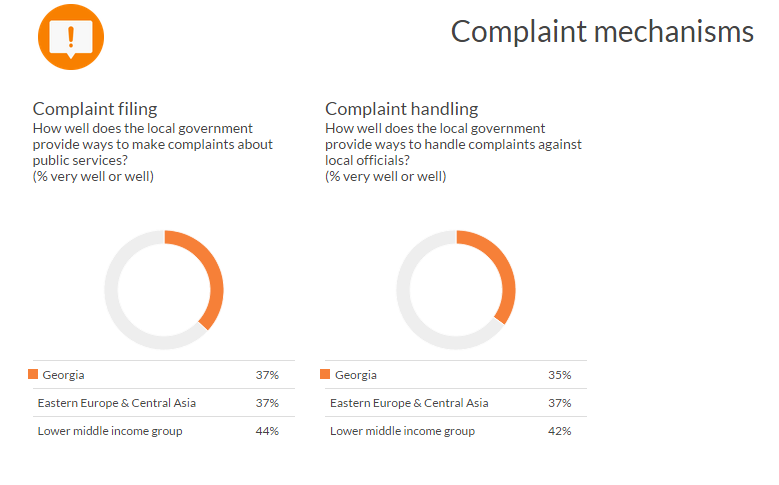 To conclude, as the WJP Open Government Index has shown, the main problem in Georgia is lack of knowledge on existing rights. Georgian citizens have little information of their legitimate rights including the right of requesting the public information. Besides, in terms of civic participation, the way of communication between citizens and decision-making officials is not effectively developed. According to the survey, the highest ranking was obtained by OGP member countries. Georgia joined this international initiative in September 2011 and in close cooperation with civil society managed to implement a number of significant reforms in terms of open government. The achievements of Georgia have been recognized internationally in 2014 when Georgia was selected as the member of Steering committee.

IDFI congratulates Georgia with these results and hopes that with active cooperation between the government and civil society Georgia will further improve Open Government Index ranking.