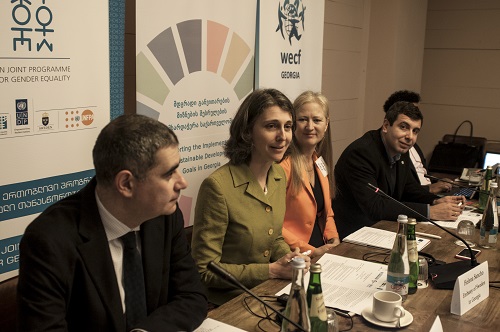 Georgian Government, international agencies, civil society and the private sector join hands to promote gender equality as one of the key aspects of sustainable development agenda. Policy dialogue on 21 February 2018 focused on the Sustainable Development Goal on Gender Equality – SDG5, aiming to set the ways of achieving meaningful progress in political and economic empowerment of women in Georgia by 2030.

Speaking at the opening of the meeting, Mariam Jajanidze, Advisor at the Human Rights Secretariat of the Government of Georgia and the Secretary of the Inter-Agency Commission on Gender Equality, Violence against Women, and Domestic Violence, stresses that SDG5 is connected with all national policies.

“An important work has been done by Georgia to ensure that all SDGs have gender-sensitive indicators. Following the national agenda 2030, the country will take effective steps to increase women’ economic participation, promote equal economic opportunities for women and men, advance gender balance in decision making, and end violence against women and girls,” Jajanidze said.

Sascha Gabizon, Executive Director of the organization “Women Engage for a Common Future” (WECF), noted the role of gender equality in the process of democratic transformation. 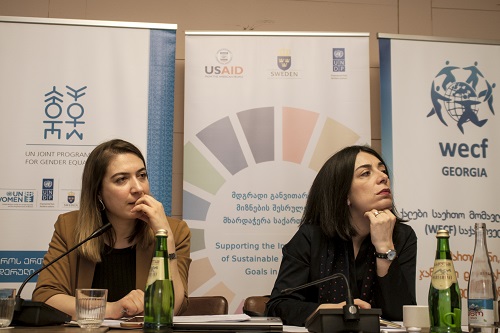 “The real social-economic transformation requires the achievement of the SDGs till 2030 in Georgia, and the key lever is gender-equality,” she said.

Gigi Bregadze, Democratic Governance Team Leader of the United Nations Development Programme (UNDP) in Georgia, focused on cooperation and partnership for the SDGs.

“The sustainable development agenda provides Georgia with the unique opportunity to make a major step forward and eliminate gender inequalities in all aspects of life. This, however, requires a collective effort of the Georgian society, coordinated work of the government, non-governmental and private sectors, and the media, supported by Georgia’s international partners,” Bregadze said.

The discussions at the meeting covered a range issues, including the low access of Georgian women to economic resources, pay gap, unequal distribution of labour and low representation of women in decision-making. 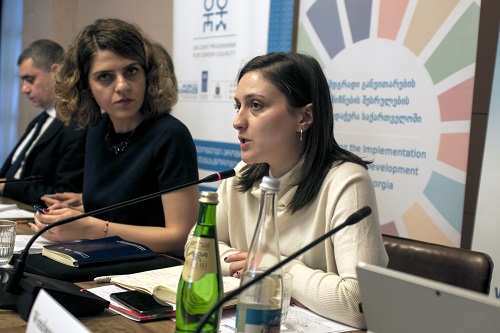 The participants heard from Helena Sancho, Deputy Head of Development Co-operation at the Embassy of Sweden in Georgia; Levan Avalishvili, Programs Director of the Institute for Development of Freedom of Information (IDFI), representatives of the Gender Equality Council of the Parliament of Georgia, gender experts and researchers from We Research and International Republican Institute (IRI).

The meeting was organized by IDFI, WECF, UNDP, Embassy of Sweden in Georgia and the Administration of the Government of Georgia.