Freedom of Information in the Public Defender's 2015 Report 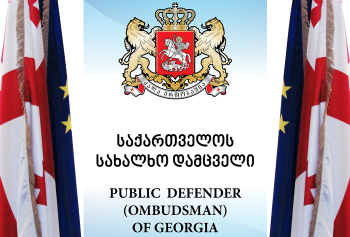 In April, 2016, the Public Defender published the 2015 report on the state of human rights and freedoms in Georgia, including freedom of information.

The right to freely receive and distribute information is guaranteed by Articles 24 and 41 of the Constitution. According to Article 24, Paragraph 1, “everyone shall be free to receive and disseminate information”. Article 41 states that “every citizen of Georgia shall have the right of access to information as determined by law, as well as to official documents about him/her stored in state institutions, unless they contain state, professional, or commercial secrets”.

Freedom of information, above all, implies public accountability of government and access to public information, which is necessary for the development of civil society and a fair state.

The New Law on Freedom of Information

The report also mentions the Georgian government’s commitment under the Open Government Partnership Georgia Action Plan for 2014-2015 to submit the new law to the Parliament by the spring of 2015. The law has not been submitted to the Parliament to this day.

The draft law on freedom of information was initially prepared in 2014 by a working group composed of the Ministry of Justice, IDFI, other non-government organizations and independent experts. The draft law incorporated best international practice and experience on access to public information. We hope that the version of the draft law to be submitted to the Parliament by the government will largely be based on the original document.

The Public Defender emphasizes the need to initiate the draft law in the Parliament and organize a public hearing as soon as possible.

A separate chapter of the Public Defender’s report is dedicated to IDFI’s case against Tbilisi City Court. The court refused to disclose its decisions on cases of former public officials on the basis of Article 6 of the Law on Personal Data Protection, which prohibits the disclosure of special category data without a written consent of the subject.

IDFI believes that even though information on judgements constitutes special category data it should be treated as public information for public officials, since the General Administrative Code does not apply the consent standard of personal data protection to public officials. In addition, the information requested by IDFI is of high public interest, which should also be considered as basis for disclosure. Finally, the Georgian Constitution and the Law on Common Courts guarantee the openness of court sessions, which applies not only to court proceedings, but to court decisions as well.

The Public Defender’s report states that the above case has made the need to improve current regulations increasingly clear. Specifically, Article 6 of the Law on Personal Data Protection does not allow state entities to independently make decisions on disclosing information based on the principle of proportionality between freedom of information and the right to privacy.

Article 6 rules out the possibility of disclosing information of high public interest to third parties without the consent of the subject, in this way contradicting the right to freedom of information guaranteed by Article 41 of the Constitution. Therefore, the Law on Personal Data Protection needs to be amended.

Sanctions on Restricting Freedom of Information

According to the Public Defender, one of the main problems in terms of freedom of information is the fact that public authorities are not guided by the principle of proportionality in their decision-making and instead prioritize personal data protection. This is caused by the disproportionality of existing sanctions, when public agencies are not sanctioned for illegally refusing to disclose public information, while at the same time are being penalized for disclosing data containing personal information.

The result is that public servants, who are obligated to observe the balance between the right to privacy and freedom of information when making decisions on disclosing information, are not guided by the principle of proportionality and try to avoid sanctions prescribed by the Law on Personal Data Protection.

The Public Defender also states that in many cases public agencies misinterpret the standards and norms set by law. More specifically, public agencies often refuse to process data (any operation, including storage and disclosure to a third party) for lack of consent from the subject, even when other bases for data processing are present.

The Law on Personal Data Protection clearly states that subject consent is but one of several bases for data processing and not its precondition. Other bases for disclosing data include high public interest, whether the requested data has already been made public, and so forth.

Access to information held by state institutions for all interested parties is one of the main principles for creating a legal state and civil society. This principle is also a prerequisite for informational self-determination and the right to free development.

The Public Defender’s report indicates that each public agency must take more effective steps to protect the right of every person in Georgia to receive and disseminate information.

IDFI shares the Public Defender’s hope that the Law on Freedom of Information will be submitted to the Parliament in the near future.

We hope that the version of the draft law that will be submitted to the Parliament by the government will largely be based on the original document developed by the working group. We also hope that the new law will eliminate the following major problems regarding freedom of information in Georgia: