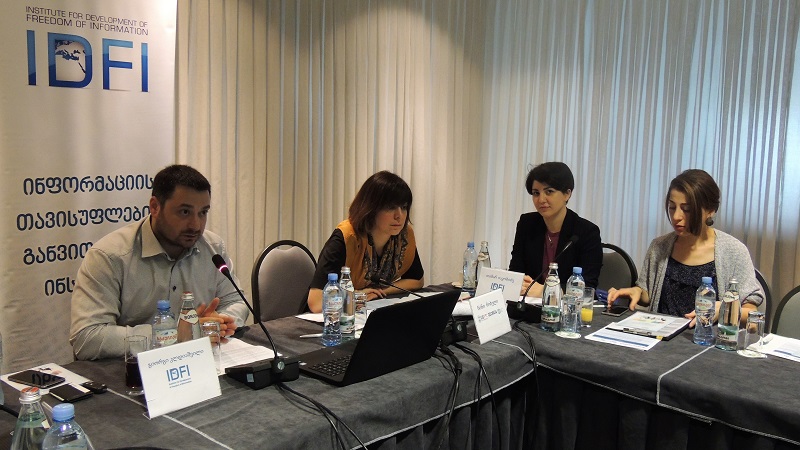 On July 12, 2017, IDFI organized a discussion on the topic of the Importance of Public-Private Dialogue (PPD) at the Legislation Drafting Stage with the support of USAID Governing for Growth (G4G) Program.

The event was attended by over 30 representatives of state and private institutions and was part of a series of discussions aiming at raising awareness on the need of PPD at each stage of policy development.

The meeting launched with IDFI’s presentation of the results of its 2016 monitoring of the legislation drafting stage. IDFI team discussed the practice of PPD in the Georgian Parliament, stressed the importance of PPD at the initial stage of policy development and presented recommendations for improving the quality of PPD in Georgia.

The second half of the discussion was devoted to sharing best practice examples of PPD identified by IDFI in 2016. For this purpose, representatives of the Georgian Agency of Innovation and Technology and the Ministry of Environment shared their experience of successful PPDs in the process of drafting amendments to the following laws:

1. Law of Georgia on Innovations – recognized by IDFI as having ensured a high level PPD at each stage of policy development.

2. Environmental Impact Assessment Code – to be evaluated within the ongoing monitoring period.

The event was concluded with a Q/A session and active discussion on the topics covered by the speakers during the event. The participants demonstrated their gratitude to IDFI and G4G for bringing attention of a wider audience to the crucial topic of PPD.

The discussion was part of the project titled Public-Private Dialogue (PPD) Quality Tracking in Georgia, which is supported by the USAID Governing for Growth (G4G) program and aims to assess the level of private sector participation in the process of developing draft laws with high economic impact.

IDFI Conducted a Training on Transparency, Accountability and Integrity for Employees of the Senaki City Hall and its Legal Entities