After Georgia regained its independence, with the country on the path to democratization, Georgian politics became an arena of emotions, personal revenge, marginalization of the persona of the adversaries, and information manipulation of society. On this platform, death still plays one of the leading roles. Forging connections between various murders and rival parties and candidates has become a priority in the campaigns of political entities.

Today, when the country is still experiencing the aftereffects of the political crisis created by last year's parliamentary elections, the self-government elections scheduled for October 2021 are notable for a particularly polarized and tense campaign. In mid-September, banners of a negative nature, depicting opposition politicians and members of the media, appeared across the country. It should be noted that even against the background of declining vaccination rates in the country, the vaccination campaign of the National Center for Disease Control and Public Health has been quite literally "hidden" in the streets and media space by the so-called "bloody banners" carrying political content. Initially, the identity of the creator of the banners was unknown to the public, despite the fact that anonymous placement of political banners in public spaces during the pre-election campaign is strictly regulated by the Election Code of Georgia (Article 46). The banners not only contain hate speech, but also depict political and media actors against the backdrop of bloody visuals, which once again reveals attempts to morally, rather than politically, delegitimize opponents. Several days later a representative of the ruling party gave a statement regarding the so-called “bloody banners” and likened them to a medicine that will help the voters see “what we do not desire.” Only several days later did it become known to the public that the responsibility for procuring the banners was claimed by a Georgian businessman. However, the above narrative from the government officials regarding the banners indicates that they are being used for political motives during the election campaign. 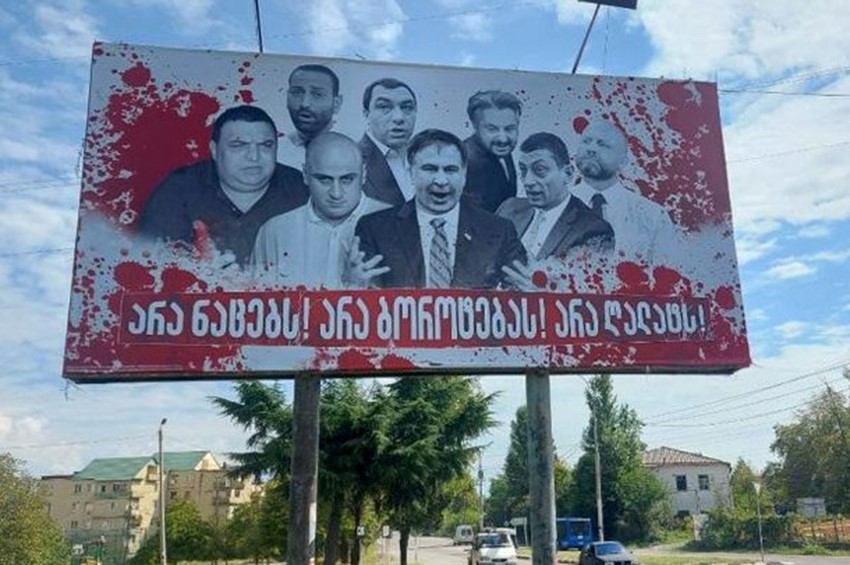 Later, posts depicting both these banners as well as those in opposition to them appeared in the online space, still using emotions and the topic of death, albeit in opposite direction, to delegitimize the person associated with the ruling party this time around. 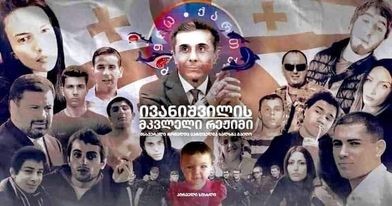 The post/banner spreading through online spaces depicts the founder of Georgian Dream, Bidzina Ivanishvili, among the photographs of the deceased whose cases had become a topic of intense political discussion in previous years. Thereby, the response comprised the same kind of moral narratives related to death. In the end, the materials of this kind not only contribute to the deepening of political polarization, but prevents the voters from receiving relevant information about the programs of the candidates and make an informed choice at the elections.

Nevertheless, it should be highlighted that the “bloody banners” placed in various public spaces across the city and the abovementioned poster spread through social media do not have equivalent societal influence and, despite similarities in content, with regard to the impact on the pre-election period, should not be evaluated as equivalent to one another. 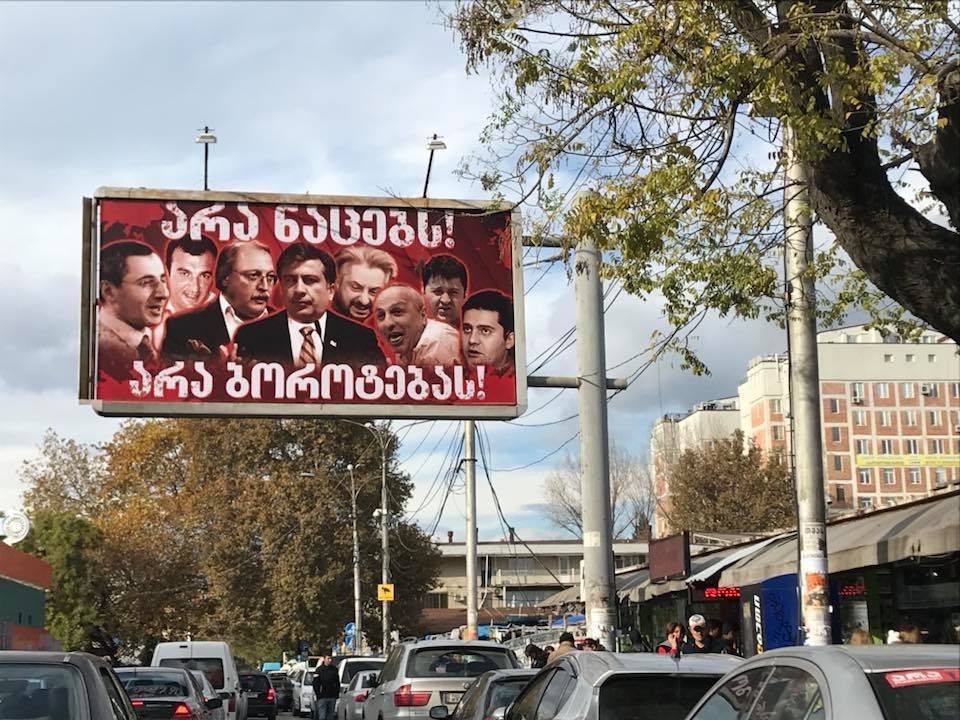 It is noteworthy that banners containing hate speech were also used during the 2018 presidential elections. The final report of the OSCE Office for Democratic Institutions and Human Rights (ODIHR) Election Observation Mission also indicated as much. According to the report, negative posters were distributed around the city and online, targeting both the ruling party and the opposition candidates. Some banners with similar content were displayed instead of pictures of election candidates at that time. These actions to some extent reflect the trajectory of the election campaign: instead of presenting political actors and their ideas, discrediting an opposing group in the course of one’s political campaign is considered a strategic step of more value.

It can be said that the work of Quentin Tarantino, rather than Andrew Haywood, is the leading influence in the theoretical thought in Georgian politics.

On September 8, 2021, a few weeks before the scheduled elections, Rafael Mursakulov was arrested on suspicion of murdering Australian citizen Shanai Brook. The case quickly became a subject of political discussion on information platforms. Several TV channels, online news outlets, and numerous Facebook users shared photos of the detainee standing next to members of the Georgian Dream.

It should be noted that some users of the social network began to spread counter-information and accuse opposition parties by posting photos of the deceased Nika Rurua, whose murder, according to them, was perpetrated by the suspect Rafael Mursakulov. These posts served the same political purpose: linking the murder suspect to an opposition group - the National Movement – and thereby leading to the moral delegitimization of the latter. On September 10, Rafael Mursakulov was sentenced to 3 months of pre-trial detention, and the next trial is scheduled for November 1, 2021.

Manipulating the subject of death is not new to the Georgian political space. In 2012, for the first time, power in Georgia was transferred through elections, although the election campaign at the time was not aimed at political debate and voter awareness, but at morally delegitimizing opponents.

Some of the most high-profile murder cases from that period, even prior to any investigation, became politicized and fully linked to the election campaign. One of the notable examples in this regard is the so-called Rafaliants case and its coverage. From the very first minutes of the coverage, the media showed the aunt of the deceased, who was a member of the Georgian Dream and blamed the death of the child on the National Movement, which was still in power at the time, precisely based on political motives. Media outlets did not shy away from covering the personal lives and tragedies around this issue, which had quickly become a subject of political debate. This was highly prevocational and polarizing for the public. On the same day, September 30, politicians themselves qualified the case as a murder and placed the responsibility for it on the shoulders of the ruling party.

Thus, the above is one of the examples in the recent history of Georgian politics of manipulating the topics of tragedy and death. It should be noted that the media assessment reports of the time spoke to the “violation of the balance of sources” by media outlets in the articles published on websites, as well as the sharply political statements made prior to the start of an investigation (for example, in the case of the death of the child). The expression of subjective and emotional assessments of the events from media representatives was especially relevant in the pre-election period of 2012, with such assessments as "sadistic" and "murderer" having been voiced. In the meantime, with the growing use of social media, online media is becoming a space for information manipulation and public polarization.

Later, in the run-up to the 2016 and 2018 parliamentary and presidential elections, cases of aggravated murder were discussed in a political context and incorporated into the election campaign through the manipulation of information. Such were, for example, the high-profile cases: the murders on Machalikashvili and Khorava streets. In the case of the latter, Zviad Kuprava, one of the leaders of the protests initiated by the father of the deceased, Zaza Saralidze, became the primary target of certain media outlets. He came to be discussed as a political figure affiliated with the opposition party National Movement. Thus, the opposing groups, despite accusing each other of manipulating the tragedy, continued to discuss the case of this murder in a political context during the pre-election period.

In the age of digital technology, every internet user has wide access to media. Most people use social platforms (mostly Facebook) to one extent or another. Oftentimes an opinion expressed by a particular "influencer" or a recognizable person greatly contributes to the "climate" in the information field. In this kind of formation, manipulating the topic of murders to political ends is much easier, although in reality this problem arose in Georgia long before such high consumption of online media had begun...

Bloody attacks and retaliation took place very often among the political players in Georgia in the 1990s. It even happened that leading politicians would be assassinated directly in the streets, during daylight hours, often in front of hundreds of eyewitnesses, although, despite this, none of these murders have been solved. On the one hand, all this can be attributed to the general chaos in the country at the time and the powerlessness of the law enforcement system. However, opponents claimed that political assassinations often involved the authorities themselves. In the end, the killings became an integral part of the political and electoral struggle, and opponents often openly blamed each other for ordering the murder of this or that person.

The most notorious political assassination in the 1990s was the assassination of Gia Chanturia, a Georgian politician, dissident, and one of the leaders of the National Liberation Movement, which took place on December 3, 1994. Ultimately, the case remained uninvestigated, although, at various times, his political opponents, including Eduard Shevardnadze, were accused of organizing the attack.

Past, Present and (Also) Future - Lessons, Similarities, and Differences

Thus, during the post-Soviet independence, the Georgian political arena is constantly loaded with manipulation of emotions and morality, with attempts to marginalize individual opponents and, most importantly, with attempts to use the topic of death for personal gain. However, in contrast to the historical data, in this regard several different trends have emerged in the recent past and present. First of all, it should be noted that if in the 1990s and early 2000s the topic of death in the political arena and its manipulation was mainly concerned with politicians and political figures, in the modern times this filter no longer exists, and the deaths of people of all ages, origins, and social backgrounds can easily be used for political controversy - especially in pre-election periods.

The second notable trend is related to the transformation of the information field. In modern times, information is disseminated not only to the public through media outlets and their cordon sanitaire, but its dissemination has also become more horizontal and dependent on the public itself. In other words, in an algorithm-based online space, anyone can spread and receive narratives and counter-narratives. Amid growing political polarization, society is becoming increasingly vulnerable to manipulation of information, especially information related to emotionally and morally fraught issues, the described process further deepens the level of disintegration between social groups.