On September 25-27, IDFI organized a workshop at Lopota Lake Resort for the contestants participating in the competition for analysts. Competition is held within the framework of the project “Strategic Plan Georgia 2020 – Strengthening Public Involvement”. The project is implemented by IDFI in partnership with the University of Bremen and with the financial support of Federal Foreign Office of Germany. The goal of the project is to raise the awareness among civil society groups and to strengthen the understanding of Georgia’s socio-economic development strategy “Georgia 2020”. Besides raising the awareness, existing challenges and the implementation process of the strategy will be critically analyzed, in order to identify problems and to formulate relevant recommendations.

13 contestants take part in the competition, who will work on topics discussed in the social-economic development strategy of Georgia and will offer their analytical works to the public via the blog created for the competition.

The subjects for the discussion panels were chosen in accordance with the 3 principal problems discussed in the Strategy 2020:

The representatives of the Pension Reform Unit talked about the necessity of reforming the existing pension system and discussed the appropriate accumulative pension models for Georgia. According to them, demographic changes – increase in life expectancy, which will increase the number of pensioners up to 900 thousand for the following 15 years – will put pressure on the state expenses on pensions. Due to increasing costs, the state budget will not be able to support the scheme in the short and mid-term perspective, thus the pension reform is inevitable. Dzidzikashvili pointed out three models of accumulative pension scheme:

Dzidzikashvili noted that the hybrid system is the most appropriate for Georgia.

He also elaborated on the particularities of the proposed pension reform:

Along with the accumulative pension system the basic state pension will be kept;

When the accumulative pension scheme comes into force, every employee will automatically become its contributor, however will have the opt-out option from the system, possible within a certain period of time;

The private fund will invest the accumulated money in different securities. The return of the investments will amount to approximately 7% annually;

Withdrawal of money from the pension fund will be possible after the employee reaches the retirement age. The accumulated sum will be divided on the difference between average life expectancy and the retirement age, after which it will be yielded to the pensioners monthly along with their basic, state pension;

The accumulative pension scheme is planned to come into force in October 2017. 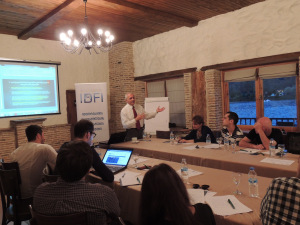 George Loladze – the founder and the CEO of the brokerage firm “Caucasus Capital” discussed the facilitating and obstructive factors for the development of capital market in Georgia. Loladze identified the creation of polycentric financial system instead of bank-centric one, provision of equal conditions for banking system and capital markets, minimizing the number of representatives of the competitive field in the formulation of capital market policy and the creation of independent regulatory body, as the main factors in reforming the capital market in Georgia. He analyzed the main legislative changes in the field during the recent years and emphasized banking sector’s, as the competitor’s role in the development of capital market. 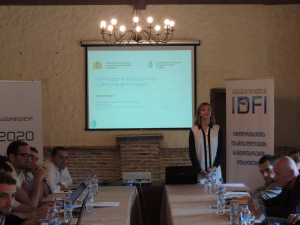 Ana Berishvili – the representative of GITA, talked about the functions, objectives and the projects of the Georgian Innovation and Technology agency. According to Berishvili, the goal of the agency is to increase the competitiveness of the population through information technologies, distance learning and employment. To achieve the objective, the agency planned and executed various projects. One of the most important projects was mentioned to be the innovation laboratories, which involves establishing laboratories on the premises of universities to implement applied training methods. In cooperation with private sector, GITA established three innovation labs, which enables the users to work on creating software of mobile platforms, computer games, computer graphics and visual effects. Industrial innovation laboratory was established at Ilia State University in 2014, where it is possible to create prototypes in the field of microelectronics. Another important project of the agency is the establishment of the first technopark in Georgia, which will host business incubation zone, common working area for innovation and business ideas, conference rooms, innovation laboratories and green working areas. In 2014, GITA organized more than 60 events (Olympiads, trainings, seminars and conferences), financed 17 startups, established 3 innovation labs, prepared 60 trainers in IT field and 40 trainers in microelectronics field. 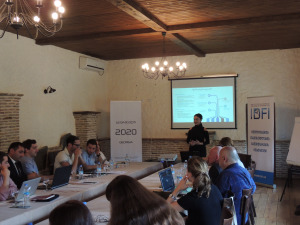 The representative of Enterprise Georgia – Tatia Bidzinashvili, talked about the initiative “Produce in Georgia” program. The program is coordinated by the Ministry of Economy and Sustainable Development and the Ministry of Agriculture of Georgia and is implemented by Enterprise Georgia, in cooperation with Agricultural Projects’ Management Agency, National Agency of State Property and Georgia’s Innovation and Technology Agency. The program aims to develop entrepreneurship in Georgia, to increase competitiveness in private sector and to improve export potential, to support entrepreneurs, to create new pants and to upgrade and expand existing ones. The agency provides financial and infrastructural support and consulting services by co-funding interest rate (10%-12%), supporting mortgages, transferring the state property in symbolic price (1 GEL) and co-funding the consultancy services. The agency also offers co-funding of loans by 50% for no more than 48 months. According to Bidzinashvili, 89 projects have been implemented in industrial sector with the investment amounting to 196.7 million GEL and 24 projects in agriculture sector with 92.6 million GEL investments. The final results of “Produce in Georgia” are as follows: number of projects – 113, the amount of investment – 289.2 million GEL, the number of employed – 5 986, the number of transferred state property – 47, the amount of loans – 140.4 million GEL, the average amount of loan – 2.02 million GEL.

Representative of the Social Service Agency (SSA), Nino Agashenashvili, discussed the development of human resources. Several problems were pointed out in this direction – lack of information about the demand of the labor market, inconsistent development of the economy, incomplete intermediary services, existing misbalance between supply and demand of the labor market, incomplete information about the particularities of the workforce (profession, experience, gender etc.).

In order to eradicate the problem, the SSA created a system for management of information about the labor market (worknet.gov.ge). According to Agashenashvili, the aim of a single system is to create a database, development of mobile business activities and the creation of an effective intermediary service. The project was launched last year and is functioning in testing mode. Currently, the portal is functional only for employment seekers and the employer’s module will be added at the end of this year. According to Agashenashvili, 53,600 users have already registered on “worknet”.

The employment procedure is the following – an employer announces vacancies and opens calls for applications, after which, the registered users of “worknet” will receive messages about the vacancies. Then, the received applications are filtered according to the criteria determined by the employer. After the applications are filtered, successful candidates are provided with official offers, with which they can meet the employers. “Worknet” has received over 3000 open vacancies since launching the portal and has awarded 2500 offers. It is important to note that the project is carried out under the obligations taken by the government after having signed the Association Agreement (AA) with the European Union (EU).

With the help of the portal, it will be possible to connect all participants of the labor market (employment seeker, educational centers, recruiters, employers etc.) and create a single database of information about the labor force. The information gathered will be processed statistically and analytically, after which, it will be used for strategic decisions. For example, planning state programmes according to the demand of the labor market.

The manager of “Schools Research Center” and researcher in the field of education, Mukhran Guliashvili, talked about the importance of the reform of the educational system set out in “Strategy 2020” and highlighted the fact that it is the only strategic document of the government, which determines the indicators of success that the government aspires to achieve in the education system. Guliashvili discussed a new scheme of professional development for teachers and a 10 year strategy of development of education. 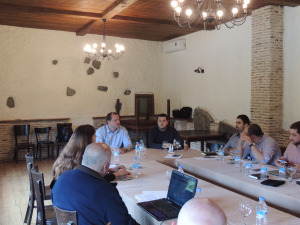 On the last day of the workshop, the contestants met the representative of the “New Political Center”, Zurab Japaridze. Japaridze discussed the problems of the implementation of the strategy, due to current economic hardship. According to him, long-term and ambitious economic development strategies are rarely efficient, as economic variables constantly change, rendering the process of economic forecasting rather difficult. The economic environment of the region (and beyond it) significantly affects Georgia’s economy; hence devising economic development plans with relevant forecasts or goals is an arduous task.

Furthermore, Japaridze noted that “Strategy 2020” contains incoherent provisions and goals. For example, decreasing the size and expenses of the government, while at the same time creating new bureaucratic entities in order to carry out state programmes. As another example, he pointed out the goal of creating a liberal economic system in Georgia founded on stable fiscal environment, while at the same time, undertaking new changes in tax law. Japaridze also noted that the goals set out in the strategy including – gradual development of the economy, will not be attained, since there is deterioration in almost every proposed indicator. The contestants also discussed the issues elaborated during the previous days and talked about their vision of social-economic development of Georgia with Japaridze.

On the last day of workshop, the participants presented their research and analytical works. After the presentations, participants discussed the issues, research methods and designs and recommendations of the works presented.