Expenditures of the Contingency Fund of the Government of Georgia: 2013-2017

Every year contingency funds are created to cover unforeseen expenses within the framework of the national budget of Georgia.

Given its nature, the resources of the contingency funds should be used in emergency situations, such as natural, epidemic, ecological and other kinds of disasters.

However, in 2013-2017, when it came to the contingency fund of the Government of Georgia (GoG), as much funds were allocated to holding various events as on emergency or unforeseen situations.

What Should Be Known about the Contingency Funds?

- The contingency fund of GoG is meant to cover expenses that are impossible to anticipate during the budget planning phase for objective reasons;

- The contingency fund of the GoG is the largest in terms of available funds;

The Law of Georgia on Public Procurement does not cover procurement made through the funds from the contingency fund of GoG. Therefore, the law does not guarantee competitiveness of these procurement. There is also no transparency obligation for such procurement. [1] 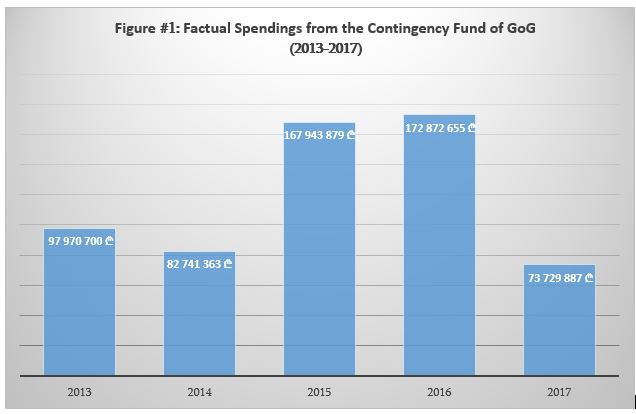 - Through the reduction of the allocations provided for the repayment of state foreign debt;

- Via the economy generated through public tenders;

- Through the reduction of allocations provided for the obligations stemming from cooperation with international financial institutions;

- Through the reduction of allocations of a variety of categories in the budget. 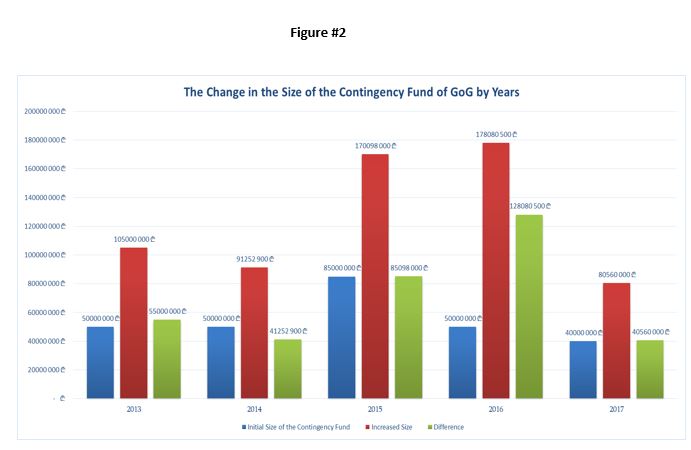 The analysis of the data reveals that over the years, a substantial portion of the contingency fund was spent on organizing, what can be labelled as events of general state significance rather than on emergency or unforeseen situations, as well as the unimpeded functioning of budgetary institutions or on covering separate instances of ongoing expenses.

A substantial part of the resources of the contingency ფund were also allocated to fostering the functioning of various state agencies (9%) and social spending (7%) (see Figure #3). 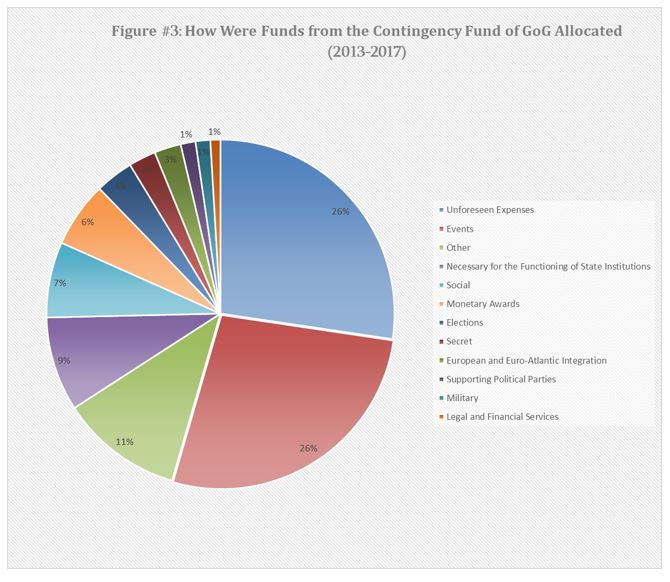 As to the category – “Necessary for the Functioning of State Institutions”, this category unites a variety of expenses. However, the analysis of the relevant decree of the Government of Georgia revealed that the funds in this category were mainly allocated for the procurement of services, goods or labor.

Within the framework of the funds spent on events, in the reporting period, the largest portion of the funds was allocated to one specific agricultural activity – 48 million GEL (“for the effective implementation of the 2015 Rtveli (vintage)) [3], as well as sports activities – 32 million GEL, events and activities of national significance – 9.6 million GEL (see Figure #4). In this last case, more than half of the funds were spent on the 26 May celebrations.

At the same time, the activities that necessitated the procurement of services, goods or labor could have been procured without competition, which creates risks inefficient spending of the budget resources.

As mentioned previously, over the years, resources from the contingency fund were allocated to cover a variety of expenses that are annual in nature and can be included in budgets of the state institutions.

Since the 26 May event is held annually, it is possible to include the associated expenses during the budget planning stage by the relevant state institutions. In sum, 5,162,626.80 GEL was allocated to the event commemorating the independence of Georgia (see List #2).

Annual Expenses of the Prosecutor’s Office of Georgia

Annually, resources from the contingency fund are allocated to foster the effective functioning of the Prosecutor’s Office of Georgia – procurement of legal services from law firms and criminal law specialists, conducting relevant studies by the experts possessing relevant knowledge in Georgian and foreign institutions, expenses related to their visits and the financing of related expenses envisaged by the Georgian legislation. In sum, 3,325,310.90 GEL was allocated for these activities from the contingency fund (see List #3).

The international conference “Georgia’s European Way” is also held annually, organized by the Office of the State Minister for Euro-Atlantic Integration of Georgia [4]. In sum, 998,169.3 GEL was spent on this event (see List #4).

Apart from the identical annual expenses, over the years, funds from the fund were allocated to cover expenses that did not carry a systematic character, although they cannot be considered to have been unforeseen based on the context. This and abovementioned problems were also indicated in the 2016 annual budget performance report assessment of the State Audit Office of Georgia [5].

Below, we also present five visible examples of expenses allocated to non-emergency situations from the contingency fund of GoG:

- In 2013, the State Administration spent 1,290,323.7 GEL on the unimpeded implementation of the functions and obligations of the Georgian Chamber of Commerce and Industry, as well as the procurement of the project documentation necessary for the renovation of the building transferred to it;

- Common courts spent 3,220,000 GEL on equipping courtrooms included in the system of common courts of Georgia with video systems;

- The Ministry of Defense spent 5,000,000 GEL to cover the costs associated with the purchase of the optical line and the equipment necessary to connect it;

- The Ministry of Internal Affairs spent a total of 13,916,822.4 GEL on the implementation of ongoing infrastructure projects, renewal of material-technical base and activities meant to foster unimpeded functioning of the ministerial system.

- The Ministry of Culture spent 200,000 GEL and 68,282 GEL on the implementation of the international arts festival “Gift” and annual music festival “Night Serenade”, respectively, from the contingency fund.

- In 2014, the State Administration spent 486,561.6 GEL from the contingency fund to cover the expenses associated with the development of the communication strategy of the executive branch of the Government of Georgia, implementation of trainings of public servants by “The Harbour Group” company and the procurement of remote consulting services;

- Additionally, 332,320 GEL was spent to cover the expenses needed to introduce the report summarizing the two-year activities of the Government of Georgia to the general public;

- The Ministry of Education and Science of Georgia spent 993,400 GEL  to increase the quality of education at St. Andrew the First-Called Georgian University of the Patriarchate of Georgia;

- Additionally, 951,789.7 GEL was used to cover the expenses associated with the concert of the bands “Parove Stelas Rand” and Groovesonix Band” on New Year’s Eve in Tbilisi.

- In 2015, the Ministry of Finance of Georgia spent 21,853,473.6 GEL from the contingency fund on the procurement of Microsoft licenses;

- The Ministry of Culture spent a totalof 466,886.1 GEL to partially cover the expenses associated with the opening of the Tbilisi Z. Paliashvili Opera and Ballet State Theatre, as well as staging the George Balanchine's Ballet Performance "Symphony Ini", Zakaria Paliashvili's Opera "Abesalom and Eteri" and a celebratory Gala Concert;

- 830,600 GEL was spent to finance the unimpeded functioning of the Kutaisi Municipality LLC "Soccer Club Torpedo Kutaisi", in the form of expenses of overall national significance;

- As well, 5,190,000 GEL was spent to cover the expenses associated with organizing the European youth Olympic festival – “Tbilisi 2015” – in the Municipality of Tbilisi.

- In 2015, the Office of the State Minister for Euro-Atlantic Integration of Georgia spent 59,773.7 GEL to cover the expenses associated with the implementation of the Europe Week of May 8-24;

- The Ministry of Economy and Sustainable Development spent 8,799,932.3 GEL on the unhindered implementation of the “Produce in Georgia” national program;

- As well, 5,499,999.8 GEL on the implementation of Georgia’s autumn and winter marketing and advertising campaigns for the LEPL National Tourism Administration.

- The Ministry of Culture spent 27,970,212.4 GEL on the implementation of the cultural activities plan, as well as to cover the expenses necessary to inform the public on these activities and implement an advertising campaign;

- Additionally, 244,000 GEL was allocated to cover the expenses associated with the publication of the book – “Trilogy of the Century – Light of Christ for Georgia” Volume 3 – “Sunny Night Patriarch”.

- In 2017, the Ministry of Foreign Affairs spent 419,977 GEL from the contingency fund in order to cover the costs associated with the design projects, expert work and sustainability research of the buildings at Leonidze street N3 in Tbilisi.

- The Ministry of Culture of Georgia used 496,943.1 GEL to cover the expenses related to the introduction of Georgia to the Frankfurt International Book Market;

- As well, 49,629 GEL to cover the expenses associated with filming the documentary film “The Journey of Atskuri and Iveria Mother of God Icons”;

- The Ministry of Sport and Youth Affairs of Georgia spent a total of 6,999,936.3 GEL to cover the 2017 expenses of the National Soccer Development Program in Georgia;

- Additionally, 1,999,341 GEL was spent to finance the expenses within the framework of the National Basketball Support Program until the end of 2017.

In 2013-2017, when it came to the contingency fund of GoG, as many funds were allocated to holding various events and activities as on emergency or unforeseen situations, despite the fact that the contingency fund, should be used primarily in the latter circumstances.

In this period, 10 state institutions requested funds from the contingency fund annually, which potentially indicates deficiencies in the budget planning process.

Because the Law of Georgia on Public Procurements does not cover contingency fund of GoG, state institutions are not obligated to use competitive procedures for procurement and proactively publish information about procurements conducted through these resources. Therefore, there is a risk for mismanagement of budgetary resources, as well as an overall low degree of transparency.

[1] The Law of Georgia on Public Procurement also does not include the procurements made with funds from the contingency funds of the President of Georgia and City Hall of Tbilisi.

[4] In November 2017, the Office of the State Minister for Euro-Atlantic Integration of Georgia was dissolved and became part of the Ministry of Foreign Affairs of Georgia.

[5] The in-depth reports on the deficiencies discovered by the State Audit Office of Georgia regarding the allocation of the resources from contingency funds see the link - https://sao.ge/files/auditi/moxseneba-2016-biujetis-shesrulebis-cliuri-angarishis-shesaxeb.pdf, pp.  169 – 179.