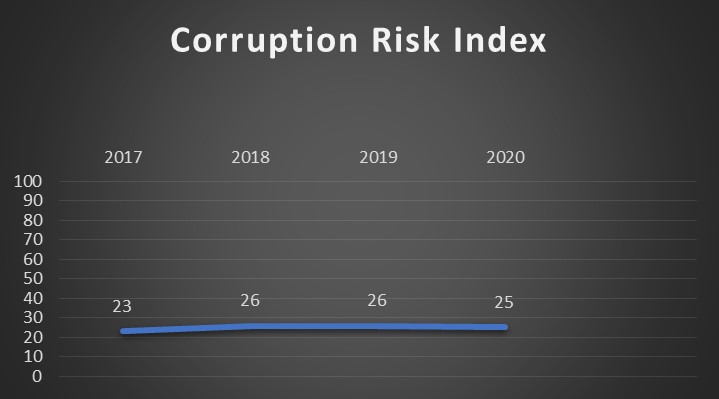 The lowest risk of corruption in business at the international level is in Denmark, so it stands first in the ranking. The highest risk of business corruption was proved in North Korea, which ranks 194th with 93 points.

The TRACE Bribery Risk Matrix examines the nature of corruption in the following four areas:

DOMAIN 1: OPPORTUNITY - Georgia has 17 points in this domain. It considers the business relationship with the government, the expectation of paying a bribe to the government and the burden of regulation. Out of the four assessed directions, in Georgia the lowest corruption risk was observed in this domain.

DOMAIN 2: DETERRENCE - It refers to the anti-corruption policy pursued by the government and the public's attitude towards bribery. In this direction, Georgia's corruption risk index is the highest among the four directions and is evaluated with 39 points.

DOMAIN 4: OVERSIGHT - considers the quality of media and its freedom as well as the involvement of the public. Georgia has 28 points in this field.

Out of these four domains Georgia has the lowest score in terms of OPPORTUNITY and consequently the lowest risk is noted in this area. The highest risk and, consequently, the highest score was observed in the direction of DETTERENCE. As for TRANSPARENCY and OVERSIGHT, Georgia got almost equal points (26-28 points). 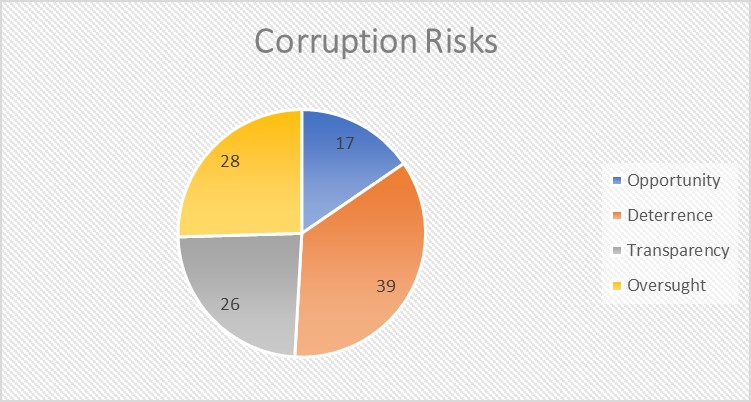 According to the Business Bribery Risk Index by Trace International, the countries with the lowest corruption risks are: Denmark, Norway, Finland, Sweden, New Zealand, Netherlands, Switzerland, Germany, United Kingdom, and Iceland. Consequently, these countries are in the top ten.

As for Georgia's neighbouring countries and the region of Eastern Europe, the Czech Republic received the best score and took the 38th place, while the highest risk was observed in Azerbaijan and it ranks 136th in the international ranking.

[1]Trace international is a non-profit business association established in 2001 in the United States to assist the private sector (business companies and related parties) in pursuing anti-corruption policies.https://www.traceinternational.org/