Researcher, the Institute for Studies of the Recent Past, Bulgaria

Understandably, the expectations from opening of the communist secret services archives are high. Society hopes that the archives will provide long awaited answers on the communist regime and its collapse, and that this step will lead to greater transparency of institutions, it will restore the justice, and pave the way for meritocratic development of the new elites. All those hopes are understandable and reasonable. At the same time, opening of the archives brings number of unforeseen challenges. The main challenge is the possible discrepancy between the information, revealed in the archives, and the public convictions, already established during the early years of the transition. How do the public and institutions react when the revelations from the archives not only do not confirm but even contradict the already established perceptions?

A good case study in this regard concerns the Bulgarian Orthodox Church. After the collapse of communism in 1989, in Bulgaria, the problem of opening of the State Security archives remained important but for quite a long time unresolved issue. Immediately after 1989, the former State Security officers destroyed about 40% of personal files, which gave them ground afterwards to insist that opening would have been useless and the truth would never be revealed. Nevertheless, after several unsuccessful attempts, in late 2006 the Bulgarian Parliament adopted a Law for the access to the former State Security archives. Accordingly, in 2007 was established the so-called “Dossier Commission” with three main tasks: first, to create and supervise centralized archive of all communist era secret services; second, to provide access to this archive for victims and researchers; and third, to verify different categories of the post-communist state and public elite for affiliation with the State Security. Surprisingly for many (including myself), during the following years the Commission started to fulfill its statutory tasks, and gained public trust. After series of reports for different groups of the political and economic post-communist elite, in the beginning of 2012, the Commission announced that its next report would be on the leadership of the Bulgarian Orthodox Church.

The Church had just overcome deep crisis. Perceived as pillar of the national identity, at the beginning of the transition, the Church was viewed as a victim of the communist regime, and the large section of society expected that it would support democratic transition and decommunization. Instead, in the early 1990s, the Church leadership became involved in bitter internal disputes. In 1992, part of the Church's leadership demanded the resignation of Patriarch Maxim on the grounds that he had become Patriarch with the support of the Communist Party, evidence of which was found in the archives. That was the beginning of a large-scale and lasting internal “Schism” within the Church. The conflict was accompanied by the occupation of buildings and churches, mutual accusations and even clashes between supporters of the two groups. The public became persuaded that the group of Patriarch Maxim (so-called "Canonical synod") was close to the former communists, while the other group, the so-called "Alternative Synod," demanded decommunization of the Church and church life. This group was led by three metropolitans: Metropolitan of Nevrokop Pimen (elected as "Alternative Patriarch"), Metropolitan of Stara Zagora Pankraty and Metropolitan of Vratsa Kalinik. The crisis, which became famous as the “the Church schism” was resolved as late as 2004 when the unity was restored with the support of the Ecumenical Patriarch Bartholomew and the state.

The truth was revealed 10 years later. In 2012, the Church leadership tried to suspend the Dossier Commission report on the ground that it represented undemocratic interference of the state in the church life. Despite the opposition, in January 2012, the Dossier Commission published its report on the affiliation of incumbent Metropolitans at that time with the communist State Security. Later on, the Commission also provided the researchers with the access to the personal files of all Metropolitans from the communist period. The 2012 report revealed that 12 out of the 15 incumbent Metropolitans were recruited in the communist period as State Security collaborators, either as young monks or bishops. The information was accepted as an extremely unpleasant surprise. The only good news was that ageing Patriarch Maxim was not among the State Security collaborators. At the same time, it became clear that among them were all leading figures of the so-called "Alternative Synod": the Metropolitan of Nevrokop and “Alternative Patriarch” Pimen was the only State Security agent in the Synod in the 1950s with a codename “Patriarch”; Metropolitan of Stara Zagora Pankraty, known as the “foreign minister” of the Church, coordinated the foreign activities of the Bulgarian Church not only with the Bulgarian State Security but also even with the Soviet KGB; and Metropolitan of Vratsa Kalinik was among the most important “agents of influence” of the state within the Synod.

Spectacular, however, was the case of the Metropolitan for Western Europe Simeon, who remained loyal to the "canonical synod" in the 1990s, whose file consisted of 30 volumes. It became clear that in 1966, he was sent to America with the hope of becoming Bulgarian Richard Zorge. Working undercover as a priest, he was at the same time the State Security highly secret operative officer and member of the Bulgarian Communist Party. In America, with the consent of his superiors, he obtained American citizenship, which enabled him to travel easier in the world, ascending at the same time the Church hierarchy. After losing the trust of his superiors, he was recalled to Bulgaria in 1978, his passport was revoked, and he disappeared from the public life. Worried about the fate of the citizen of his country, the US ambassador requested information from the Bulgarian deputy foreign minister, and unsurprisingly, he received the answer that Church is separated from the state and Simeon’s future is Church affair.

Early in 1979, the State Security officers learned with astonishment that Bishop Simeon had returned to America. It became clear that the US consul in Sofia succeeded to find him and helped him leave Bulgaria illegally and return to America. State security was facing its biggest public failure. Moreover, those events coincided with the killing of the Bulgarian writer Georgi Markov with the so-called "Bulgarian umbrella"in London, in September 1978. It remained unclear what and how much information Simeon revealed to the Americans, but finally his superiors in Sofia offered him to become a bishop for Western Europe. The deal was struck at the meeting in Uppsala, Sweden, attended by Metropolitan Pankraty, Metropolitan Simeon and their case officer from the Intelligence department Hristo Marinchev. His report after the meeting is accompanied with photographs of the three and with a note that the two metropolitans traveled "in civilian clothes to avoid the attention of the locals". 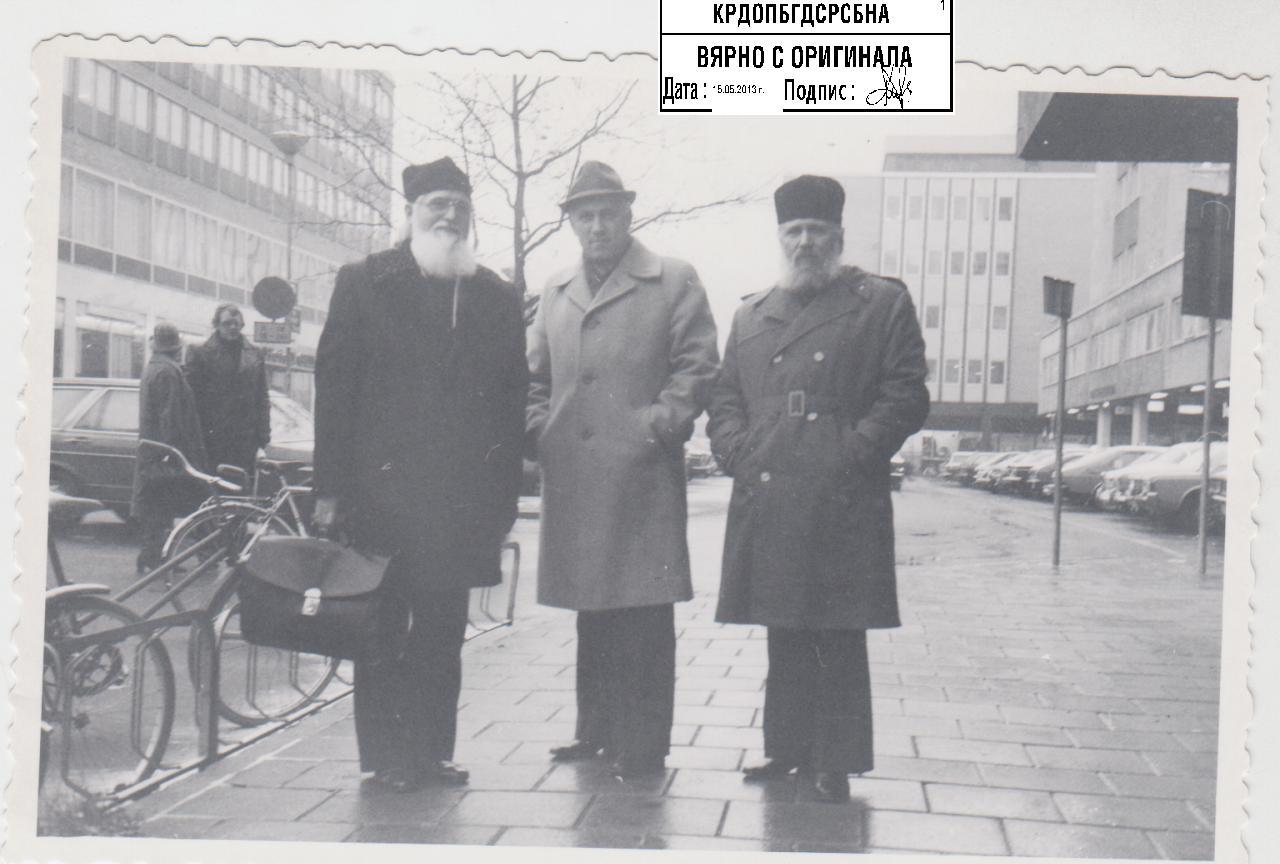 How did the society and the Church reacted to the revelations? After a while, the public astonishment gave way to conspiracy theories that immediately sought to explain the contradiction between the public perception for the “Alternative Synod” as anti-communist force and the information revealed in the archives. Two of those theories have become particularly popular. First was that the Commission (meaning the state) has hidden the file of the incumbent Patriarch Maxim. This theory was based on an isolated information from the archive, in which a State Security officer claimed that Maxim was also a collaborator. As a result, the Commission made all possible checks on this claim but never found evidence for it. The second conspiratorial explanation that became popular was that the whole Schism was initiated by the former State Security with a view to undermine the authority of the Church. A tempting explanation, which contradicts the facts: the State Security collaborators were evenly distributed between the Alternative and the Canonical Synod. Therefore, the most plausible, though less appealing, explanation for the "schism" is that part of the Church's leadership, especially the most active State Security collaborators, initiated the schism in an attempt to whitewash their biographies under the new political regime.

How did the Church respond? Not surprisingly, with silence. Attempts by the Synod minority to initiate some sort of public apology have failed, since the majority did not accept their proposal. The silence of the Church leadership on such a sensitive issue alienated it from that part of the public that over the years insisted on the opening of the archives. When it lost the support of these circles, the Church leadership started to depend more and more on the support of the public and noisily promoted the newly fashionable "identity politics".