As a result of a large-scale amnesty in 2012, the public expected that the crime levels would rise in Georgia, which meant a significantly increased public interest towards crime data.

Despite this interest, until 2015, the Ministry of Internal Affairs (MIA) was not proactively publishing full data on crime, which would reveal the state of crime in the country. Throughout 2015, the Ministry did publish monthly detailed statistics on crime but stopped doing so in 2016.

Currently, crime statistics in Georgia is not being disclosed fully, consistently and proactively. This lack of access to information raises suspicions that the inconsistency with which the MIA has been publishing the data is guided by its content.

Crime statistics in Georgia is also being published by the National Statistics Office (Geostat), whenever it is provided by the MIA. The most recent (2016) data was posted on the Geostat website only after the Minister of Internal Affairs Giorgi Mghebrishvili was confronted with this question during a Parliament hearing.

According data published by Geostat and the MIA, the most number of crimes were registered in the first 9 months of 2016 compared to the same periods of two previous years: 154 more than 2014 and 1394 more than 2015. 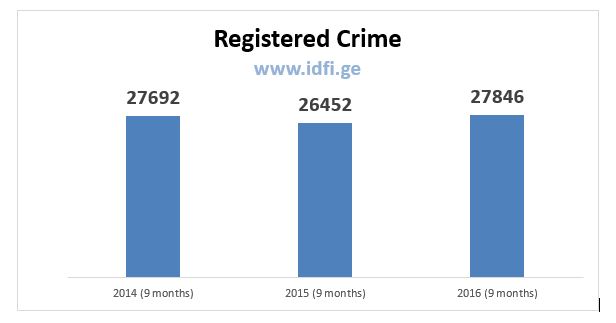 The first 9 months of 2016 had the highest number of crime in the following categories:

- Crimes against human rights and freedoms

- Crimes against public safety and order

The first 9 months of 2016 had 743 crimes against life, compared to 623 in the same period of 2015 and 499 in 2014. This category includes crimes such as premeditated murder, attempted murder, Incitement to suicide and more.

The first 9 months of 2016 had 3660 crimes against health, which is 52 more than in the same period of 2015 and 788 more than in 2014. This category includes crimes such as intentional damage to health, domestic violence and more. 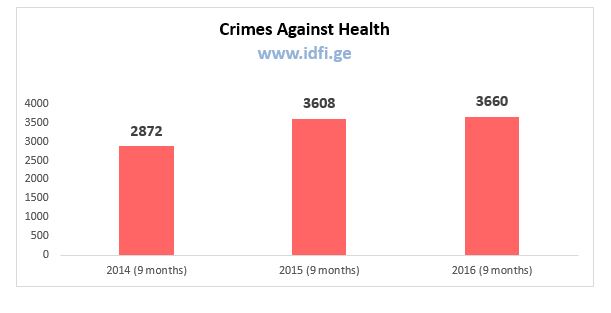 The largest increase was identified in the number of crimes against human rights and freedoms. The number of these crimes in 2016 exceeded those in 2014 by 70% and 45% in 2015. This category includes crimes such as illegal imprisonment, trafficking, hostage-taking, and more. 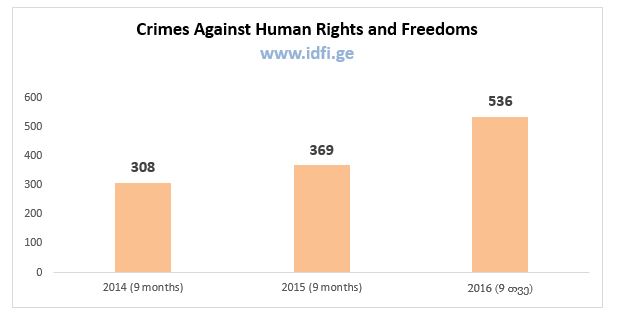 The first 9 months of 2016 had 1543 crimes public safety and order, which is 89 more than in the same period of 2015 and 70 more than in 2014. This category includes crimes such as hooliganism, unlawful purchase, storage, carrying, manufacturing, transportation, transfer, sale or use of firearms, ammunition, explosives or equipment, and more.

Crimes related to transport have also been increasing since 2014. These category includes violations of traffic safety and other related rules.

Crime against administrative order has been the only category that had a decreasing trend over the past three years. The number of these crimes decreased from 2026 in 2014 to 1537 in 2016. This category includes offenses such as making of forged documents, and more.

Unfortunately, the data that is available online for 2016 does not allow for a more detailed analysis of specific crime types, since neither Geostat nor the Ministry of Internal Affairs provides disaggregated information for 2016 on their websites. 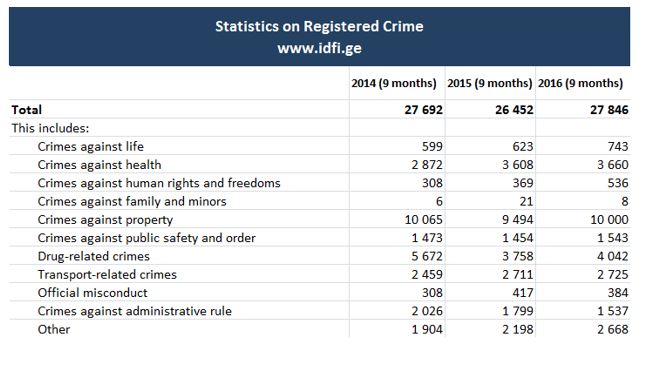 On April 30, 2010, National Statistics Office of Georgia (Geostat) signed a Memorandum of Cooperation with the Ministry of Internal Affairs (MIA). According to the memorandum, the Ministry agreed to provide Geostat with monthly crime statistics, which would then be published on the Geostat website.

The MIA stopped providing Geostat with data in 2012, when the MIA and the Ministry of Justice launched a joint electronic module for crime registration.

According to the MIA, the new system allowed the Ministry to update their methodology or registering crimes, which led to more accurate and complete statistics. However, this change also made it inappropriate to compare crime data pre and post 2012.

From 2012 to 2015, the Ministry did not proactively publish full crime data on its website. For example, the website does not contain any data for 2012; for 2013 it only contains aggregate data of the first quarter; and for 2014 data for only the first 9 months.

2015 was an exception in that the Ministry published monthly detailed crime statistics throughout the whole year. During this period, the MIA also published a number of analytical documents analyzing crime trends in 2012-2015. These documents also aggregate full data for 2013-2014, which was previously only partially available on the Ministry’s website.

In 2014, the Ministry of Internal Affairs took on a commitment to create a crime map and provide interactive crime statistics. The commitment was part of the Open Government Partnership Georgia Action Plan 2014-2015. Originally it was a recommendation issued by the Institute for Development of Freedom of Information (IDFI). The crime map was meant to be an interactive instrument, which would allow seeing statistics in various formats with combination of different variables, including specified time period, crime type, region, etc.

Unfortunately, the Ministry did not fulfill this commitment. According to the Ministry, it was actively working on implementing the commitment and had already taken practical steps, however, in the end, the process was stopped for no apparent reason.

The incompleteness and inconsistency with which the Ministry of Internal Affairs has been publishing its data raises suspicions that the Ministry is artificially trying to keep the public in the dark about the crime situation in the country. In addition, the conflicting nature of the statistics that the Ministry does publish damages public trust towards the reliability of the available data.

IDFI calls on the Ministry of Internal Affairs to:

2. Explain in detail the methodological changes that resulted in radical differences between data published before and after 2013;

3. Fulfill its commitment to create a crime map;

4. Provide Geostat with detailed crime statistics on a monthly basis, who then must publish this data on its website.