Overview of the Vaccination Process in Georgia

The Government of Georgia unveiled the National Vaccination Plan on January 21, 2021. The goal of the plan was to vaccinate 60% of the population over the age of 18 by the end of the year. According to the Deputy Minister of Health, Tamar Gabunia, the priority groups for vaccination were defined as follows:

According to the National Vaccination Plan approved by the Government of Georgia in January 2021, based on preliminary estimates, the minimum budget required to cover 60% of the total adult population should have been 64,333,622 GEL, and the maximum - 158,190,243 GEL. The minimum and maximum costs of purchasing vaccines were GEL 48,456,260 and GEL 141,985,429. In April 2021, changes were made to the plan, although this component remained unchanged.

According to Tamar Gabunia, the large gap between the required funds is related to the different costs of the vaccine, as the price may be different based on the time period and methods of delivery.

The vaccination process in Georgia began on March 15, 2021. It was decided to purchase the vaccine through the COVAX platform. To determine when Georgia officially began negotiation for vaccines, IDFI requested copies of official correspondence from both the Ministry of Health and the National Center for Disease Control and Public Health regarding the purchase of the vaccine. The Ministry did not provide us with the abovementioned information. According to documents received from the National Center for Disease Control, the first communication regarding vaccines was made on November 25, 2020; a letter from the Ministry of Foreign Affairs was sent by the Ministry of Health to the Center after Lithuania purchased more vaccines than necessary. Between November 30 and December 8, 2020, correspondence between the Ministry and the Center was underway regarding the possible use of Sinovac. In particular, a representative of Sinovac addressed the Ministry to discuss the characteristics of the vaccine and the prospect of its introduction into the country. On December 25, the Center wrote a letter to the Ministry regarding the need to refine the relevant legal framework in Georgia for the COVAX Platform. On the same day, communication was held between the parties on the process of filling the documentation received from the COVAX platform; it can therefore be assumed that negotiations with the platform were already underway at that stage, although it is unknown exactly when this process began. According to the correspondence, the COVAX platform opened a second window on December 23 for the Astrazeneca vaccine. On December 28, Amiran Gamkrelidze wrote a letter to the Ministry recommending that the COVAX offer was acceptable and clarifying the procedures in case of Georgia's consent or refusal.

In a letter dated January 8, 2021, Paata Imnadze wrote to the Ministry of Health, “it was considered expedient to purchase the Covid vaccine through the United Nations Children's Fund ... the decision took into account that at the present stage there is no experience of cooperation with existing vaccine producing companies and we are not informed about many details, including terms of delivery (INTERCOMS).”

In January 2021, Amiran Gamkrelidze and at that time the Prime Minister of the country announced that Georgia would be one of the first to receive Pfizer vaccines through the COVAX platform in February. On January 14, it was reported that Georgia had not applied directly to Pfizer, and Pfizer vaccines had not been mobilized on the COVAX platform. Since the vaccines were not received by the country in February, one of the media outlets approached COVAX for an explanation. According to their response, the Pfizer vaccine was received by countries that met the requirements of the platform: “The national regulator of all participating countries must authorize the vaccine to be imported; "Also, all participants must sign a compensation contract with the vaccine manufacturers in order to be able to receive doses from the COVAX platform."

Interestingly, the first Pfizer vaccine was used in the UK on December 8, 2020. According to the Oxford's Our World in Data project, on December 20, 2020, 0.09 and 0.17 percent of the population in Israel and the United States were vaccinated. As of March 15, 2021, the situation was similar in several countries with incomes (GNI) comparable to those in Georgia: 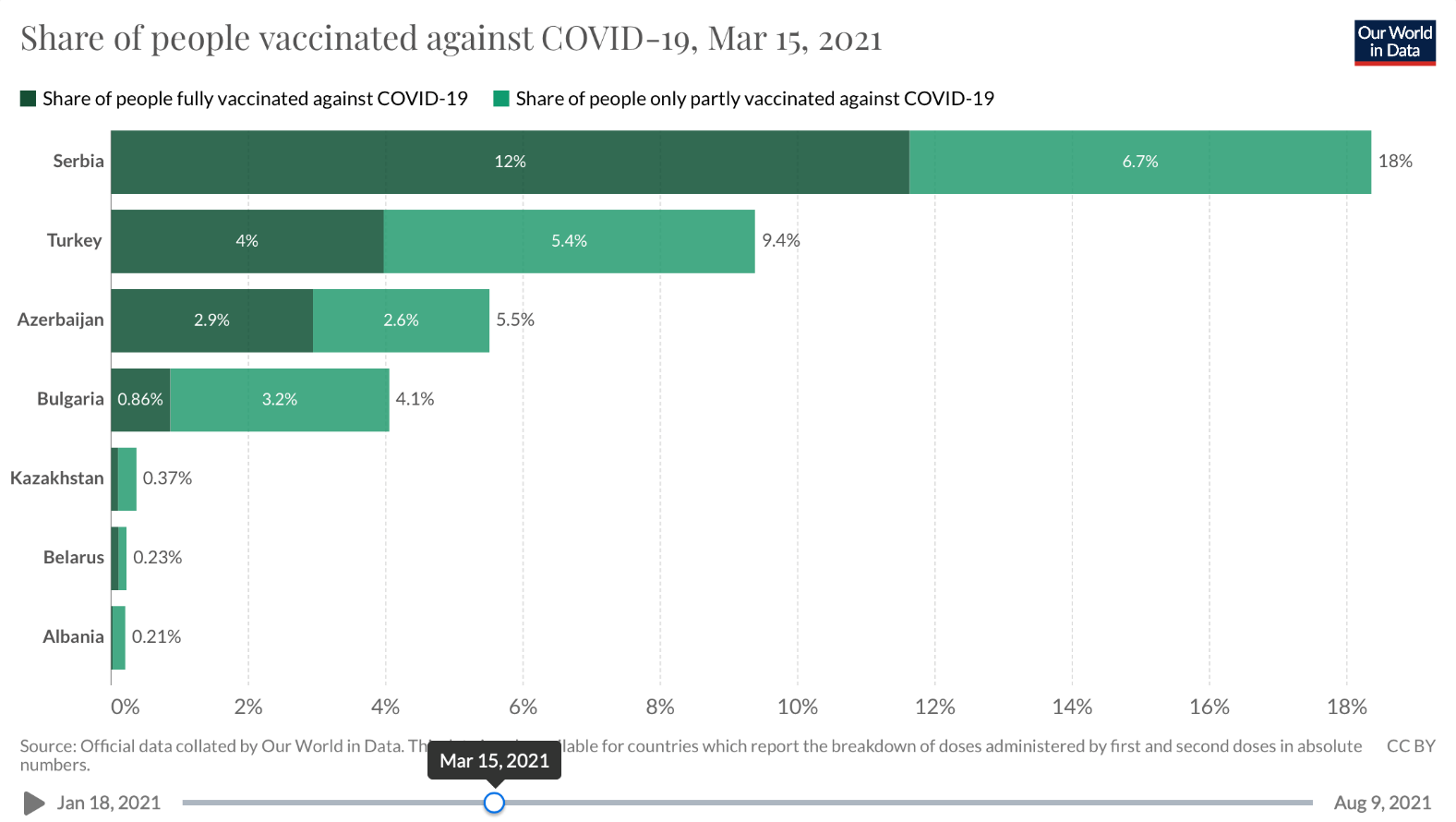 As of August 9, Georgia has one of the lowest rates of vaccination among the same countries: 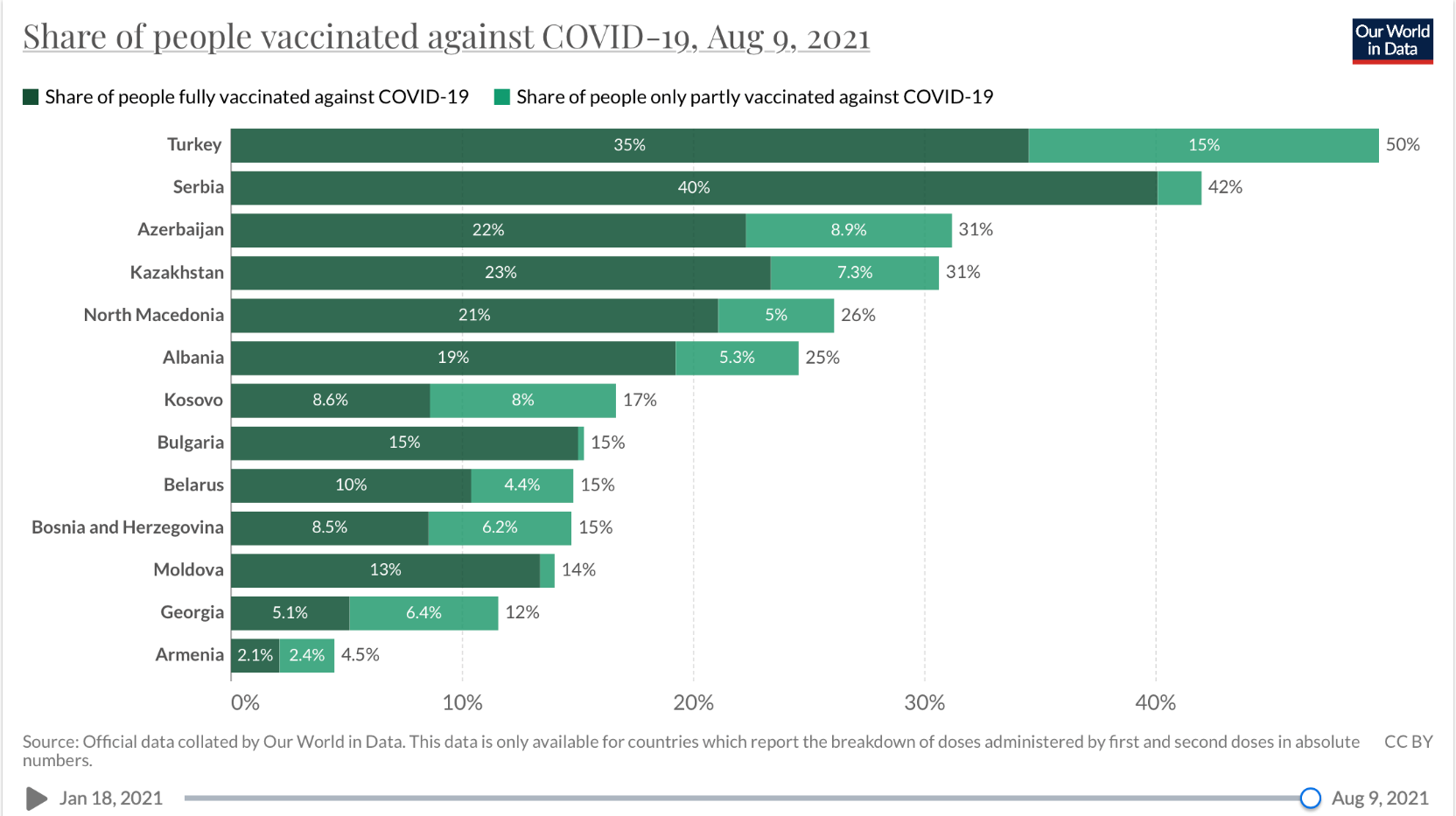 According to data provided by the National Center for Disease Control and Public Health, the number of vaccinations as of August 4 is distributed in the regions 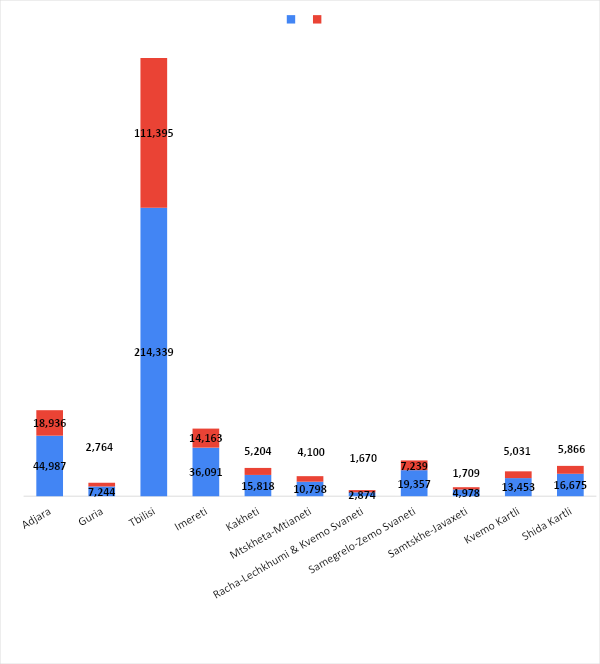 58% of the vaccinations and bookings come from Tbilisi.

In June 2021, there was a shortage of doses of AstraZeneca, which prevented single-vaccinated individuals from receiving a second dose at the appropriate time. The special group of the Ministry of Health started investigating the issue, with the Audit Service also becoming interested in the process. According to the Centers for Disease Control, vaccine losses between March 15 and August 4 amount to a total of 3,159 doses, of which the largest, 2,551, are the AstraZeneca vaccines. The full list looks as follows: 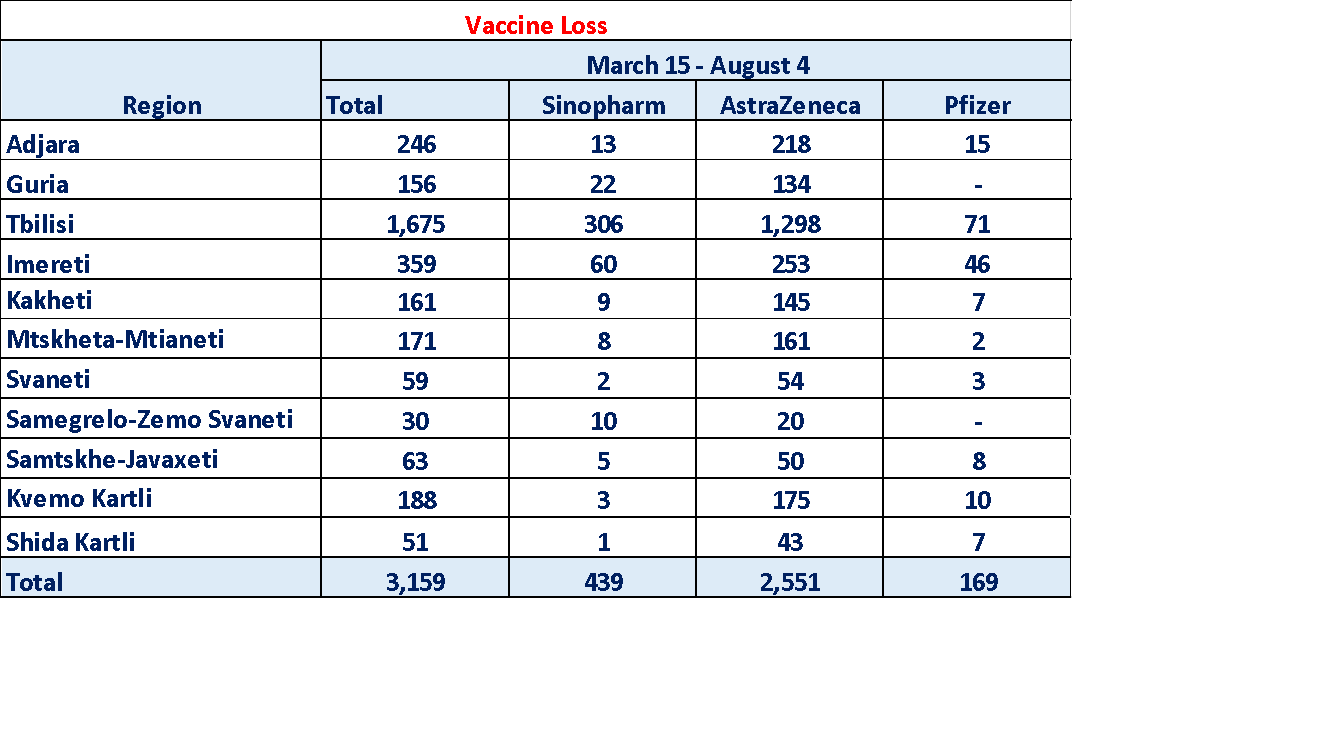 As can be seen from the table, the total loss is 3,159 doses, of which 169 doses are Pfizer vaccines. Most losses are recorded in Tbilisi, followed by Imereti and Adjara.

As of August 8, one of the lowest rates of vaccination was observed among these priority groups. In the health sector in particular, a total of 17,200 people have been vaccinated, including doctors, nurses, and other staff in the sector, of which only 6,443 have received two doses, with 3,751 doctors and 645 nurses. The number of medical staff vaccinated with a single dose is 11,569 people. According to available data, only 36% of the 46,520 targeted medical workers have been vaccinated in the 5 months since March 15.

Additionally, a low rate of vaccination was observed among school staff, while according to age groups, the highest number of vaccinated people are in the category above 18 years. Unfortunately, the official statistics website does not distinguish between the number of people with chronic diseases over 18, the number of people vaccinated over the age of 75, and the beneficiaries of long-term care facilities. All of the above groups are considered priority groups under the National Vaccination Plan.

According to the Centers for Disease Control, vaccination dynamics increased significantly in July and August, possibly due to an increase in the number of available vaccines.

Based on IDFI’s analysis, it is clear that not enough information about the vaccination process is available. the requested official documents have not made it clear what negotiations Georgia is carrying out for the smooth continuation of the vaccination process, and it is unknown how much the country is paying for vaccines. Despite the recent increase in vaccination dynamics, it is clear that the country has failed to have a timely and effective administration of imported doses. This is confirmed by the fact that out of more than 2 million doses received, only 645 thousand doses have been used at this stage. At the same time, only 10.4% of the population over the age of 18 have been fully vaccinated, when the set target was 60%. Also according to available data, only 36% of the 46,520 targeted medical workers covered by the National Vaccination Plan have been vaccinated in the five months since March 15.

At the same time, the country has a loss in vaccines. According to the NDI public opinion poll, 47% of the respondents do not intend to be vaccinated, while 56% do not know how to register on the vaccination platform. We are unable to find out what kind of information campaign the government is conducting to interest and inform the population about the vaccination process, which company is performing this duty, how much money is spent, and what channels are used to convince the population about the need for vaccination. It is known that a new website provax.ge and its Facebook page have been created for this purpose, although information on other activities is not available.

An analysis of transcripts of negotiations for a vaccine provided by the National Center for Disease Control and Public Health reveals that on December 25, 2020, Georgia had not yet made a final decision to purchase a vaccine from the COVAX platform. The letter of January 8, 2021, shows that at this time the decision was made to procure with the involvement of UNICEF, as there was a  lack of experience in communicating with manufacturers. Unfortunately, the Ministry of Health did not provide us with information about such correspondence. Consequently, it is difficult to determine when the negotiation process began, whether the implementation of vaccine-related procedures was delayed, and whether this problem was the cause of the delayed vaccination.

IDFI has appealed to the court regarding the failure to obtain public information requested from the Ministry of Health and will try to obtain relevant data through legal mechanisms. IDFI calls on the Ministry to take into account the high public interest in the pandemic control and vaccination process and to ensure that information is available both proactively and on-demand.

Overview of the Vaccination Process in Georgia