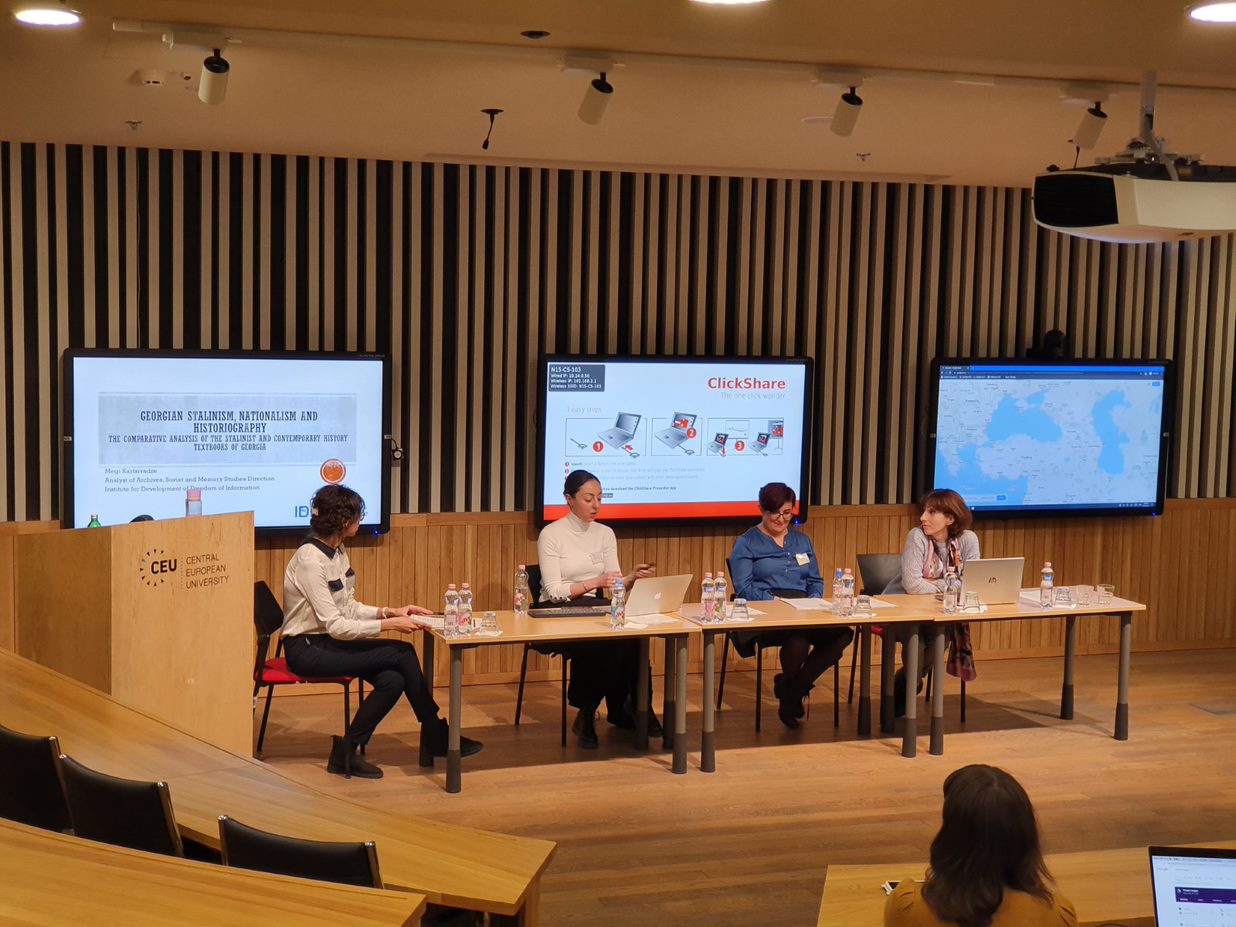 On 15-16 February 2020, the head of the Archives, Soviet and Memory Studies direction at the Institute for Development of Freedom of Information (IDFI), Anton Vacaharadze and an analyst, Megi Kartsivadze attended the conference „Nationalist Historiography in Post-Communist South Caucasus“ organized by the Central European University in Budapest.

Within the frame of the conference, on IDFI’s initiative, a roundtable discussion was held on the “Openness of State Archives and Memory Politics in the Former Soviet and Eastern Bloc Countries”. Anton Vacharadze, Megi Kartsivadze, the Dean of the Graduate School at the Free University of Tbilisi, Nutsa Batiashvili, Head of the Department for ContemporaryHistory and Senior Research Fellow at the Institute of History at the Research Centre for theHumanities of the Hungarian Academy of Sciences, Sándor Horváth and a researcher of the Central Asian history, Thomas Welsford participated in the discussion.

Anton Vacaharadze talked about the existing problems in the archives of the South Caucasian states and the advocacy campaigns carried out within the frame of the IDFI’s project. He provided the information about the IDFI’s project “Openness of State Archives in the former Soviet and Eastern Bloc Countries” and the database of the international rating of the openness of state archives http://open-archives.org/. Also, he talked about IDFI’s activities in Georgia and beyond – articles published within the frame of the project, IDFI’s legislative proposal on the amendments in the laws on National Archives and Personal Data Protection, the granted court case against the National Archives of Georgia, Stalin’s lists and the other activities.

Sándor Horváth presented the examples of the best practices of archival openness in Eastern Europe. He talked about the online access to the archival documents and the flexibility of archival work. Besides the best practices of the openness of archives, his talk covered the challenges existing in Eastern Europe. Based on the information provided by Sándor Horváth, discussion continued within the frame of the comparative analysis of the openness of archives in the different regions. 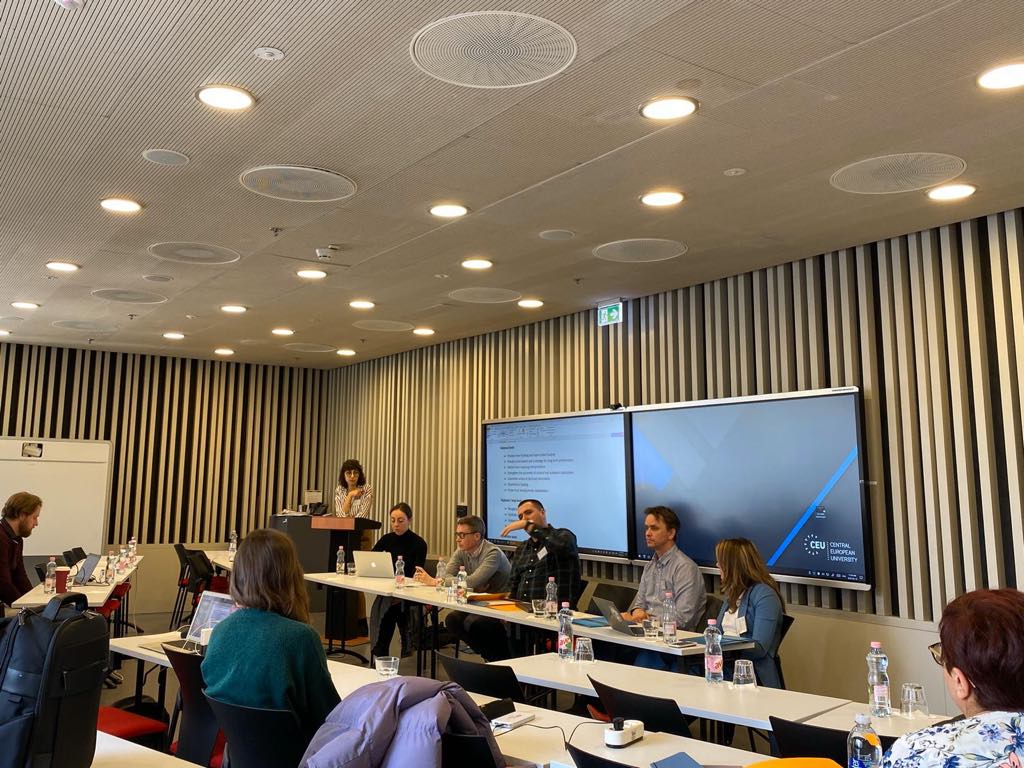 Apart from the openness of archives, the discussion concerned the memory politics of the mentioned regions and the role of archives in the formation of collective memory, new national narratives. Nutsa Batiashvili talked about the memory politics in Georgia after the fall of the Soviet Union and the institutional transformation, which has influenced the process of the formation of the new national narrative. She mentioned that, basically, the transformation of national historiography was related to the dynamics of the relations, mostly the clash between the local so-called intelligentsia and political class. The openness of state archives usually played an important role in this process.

Megi Kartsivadze’s talk, based on the Georgian experience, covered the role of archives in the elaboration of the effective memory politics. She emphasized the importance of archives in lustration, rehabilitation of the victims of repressions and the formation of the comprehensive national narrative. In addition, Megi Karstivadze discussed the significance of the accessibility of archives in the current political environment, especially when the Russian propaganda aimed against the sovereignty of Georgia is in a noticeably active phase.

Besides the mentioned discussion, within the frame of the conference, Megi Kartsivadze made an individual presentation “Georgian Stalinism, Nationalism and Historiography: The Comparative Analysis of the Stalinist and Contemporary History Textbooks of Georgia”. The presentation covered the change of the Georgian national narrative in the 1930-1940s and the intertwinement of Stalin’s cult with the key historical figures. After that, Megi Kartsivadze discussed to what extent the Stalinist narrative is preserved in the contemporary history textbooks.

By the end of the conference, the head of the CEU History Department, Balasz Trencsenyemphasized the importance of the comparative analysis for the study of national historiographies, memory politics, openness of archives and the related issues. The comparative analysis of the South Caucasus, Eastern Europe and Central Asia enable us to create a broader perspective of the existing challenges and achieved progress. For this, IDFI actively continues the evaluation of the openness of archives in the different countries and works to increase the number of the countries covered by the international rating of the openness of state archives in the future.

This activity was financed by the Open Society Institute Budapest Foundation (OSI) within the frame of the project - Enhancing Openness of State Archives in Former Soviet Republics and Eastern Bloc Countries.