On December 24th, 2018, High Council of Justice (HCoJ) of Georgia nominated ten candidates to the country’s Supreme Court. The nomination caused controversy among the representatives of civil society organizations as the nominated judges were either leaders or close associates of a group of judges (so called “clan”) exercising an informal power over Georgia’s judiciary. The HCoJ was enabled to make the nominations due to recent constitutional changes that shifted the right of nomination from the President to the HCoJ. In response to the controversy, Parliament postponed discussion of candidates to spring. Later all ten of the nominated judges removed their candidacies.On the next day that the Parliament announced postponing of the discussion of nominated judges, High Council of Justice heldan interview with Levan Murusidze, and appointed him to be the Tbilisi Court of Appeal judge for life. What does the public know about the process? A survey conducted after the HCoJ’s submission of nominations suggests the public knows little about the process, is largely unaware of the judges, disapproves of the appointment of the judges if they are aware of them, and disapproves of the one appointment that has already been made to the Tbilisi Appeals court. 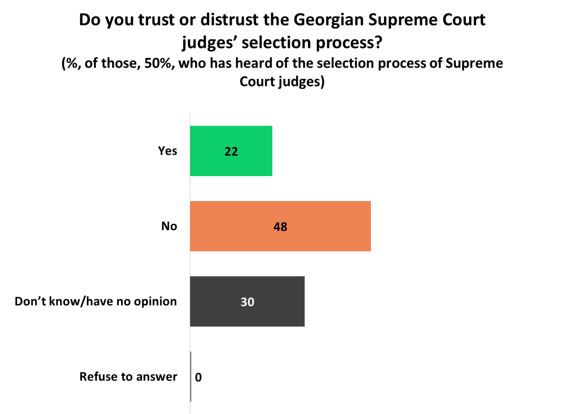 Most of the public has not heard of the Supreme Court candidates. Over 41% of the population of Georgia who has heard of the process, have not heard of six nominated candidates out of ten and in all cases people who have information about the candidates say they should rather not be appointed as Supreme Court judges for life. Three candidates that people had more knowledge about were Mikheil Chinchaladze, Head of the Tbilisi Court of Appeal, Giorgi Mikautadze, Secretary of the High Council of Justice, and Dimitri Gvritishvili, Head of the Kutaisi Court of Appeal and a member of HCoJ. Mikheil Chinchaladze, who is believed to be one of the leaders of the informal group, was the candidate who, compared with other candidates, received the highest share of ‘Yes’ and ‘No’ responses about lifetime appointment to Supreme Court. 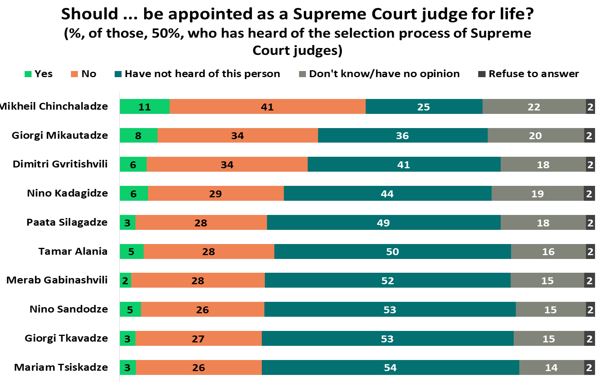 Generally, the better known a candidate, the less likely is the public to approve of their nomination to the Supreme Court. Of the 50% who have heard of the Supreme Court judge selection process, only 13% agree that candidates were selected based on honesty and competence. A plurality (45%) have no opinion or don’t know, and 41% disagree. 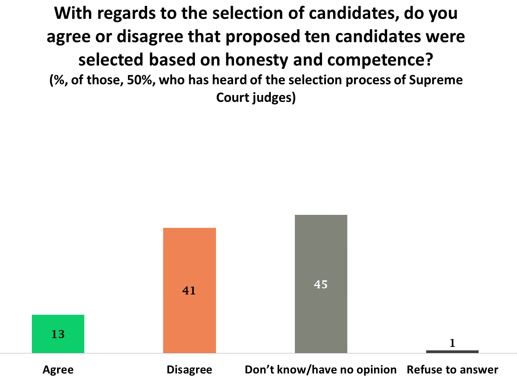 Importantly, those respondents who are aware of other nominations in Georgian courts think of these facts negatively. Respondents were asked about the appointment of Levan Murusidze to the Tbilisi Court of Appeals for life. Murusidze, who had presided over cases of high political interest in the past, was often criticized by the civil society organizations as a leader of the informal group of judges. More than half of the respondents were familiar with the fact of Murusidze’s appointment to the court. The majority of those who had heard of the fact (57%) assessed the appointment negatively. Only 13% of expressed positive feelings towards the decision, while almost a third (29%) of respondents were unable to assess the decision.

Only half of the public is aware of the Supreme Court nomination process, and those that are aware are generally negative about it.  For candidates, the better known they are, the less fit they are perceived to be on the court. The process more generally is seen in a negative light, highlighting the clear need to improve the process of Supreme Court appointment in Georgia.

Note: This blog post has been produced with the assistance of the European Union. Its contents are the sole responsibility of CRRC-Georgia, EMC and IDFI and do not necessarily reflect the views of the European Union. On January 28-February 4, 2019, within the EU-funded project “Facilitating Implementation of Reforms in the Judiciary (FAIR)”, CRRC-Georgia conducted a phone survey to find out people’s knowledge and attitude about the Supreme Court nomination process. The survey resulted in 804 completed interviews, and is representative of the adult Georgian-speaking population of the country. The average margin of error of the survey is 2.6%.