Even though numerous organizations publish data on governance, the available data is often incomplete, covering some countries and years but not others. The Governance Data Alliance was formed in order to solve this problem. The alliance unites various groups working on governance for the ultimate purpose of improving the quality and effectiveness of democracy.

The Governance Data Alliance already released a part of its 2015 data. The data was compiled from the results of indices and ratings run by the following organizations: World Bank, Transparency International, Open Governance Partnership, International Budget Partnership, World Justice Project, Centre for Law and Democracy, World Resources Institute, Freedom House, Global Integrity, Global Financial Integrity, and Natural Resource Governance Institute. Below we summarize the results for Georgia and compare them to those of Armenia, Azerbaijan, Moldova, and Estonia.

The World Bank’s Citizen Engagement in Rulemaking initiative covers 185 countries and measures the level of involvement of citizens and companies in the process of developing business regulations (0 - very low involvement, 6 - very high involvement). It also measures how governments assess the possible impact of new regulations in their country – including economic, social and environmental perspectives. According to the 2015 data, Georgia was given the score of 3, Armenia - 2.40, Azerbaijan - 2, Moldova - 4.40, and Estonia - 6. (Figure 1) 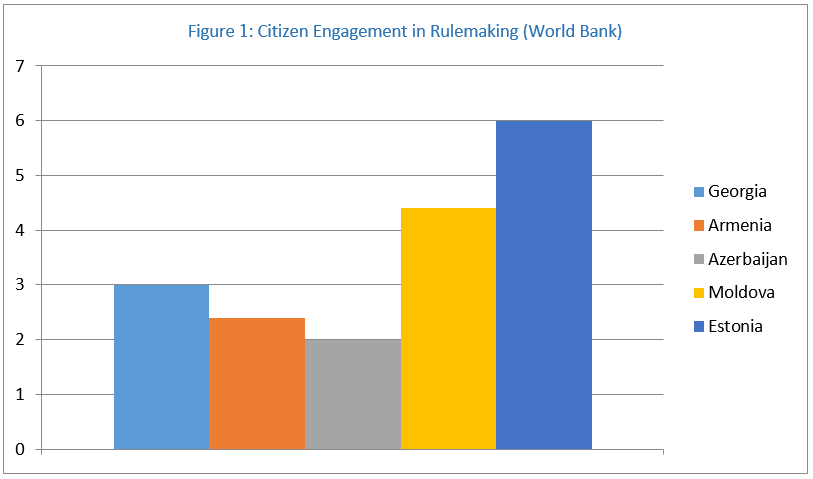 The 2015 report by the Governance Data Alliance also includes the Open Government and Rule of Law Indices run by the World Justice Project. The Open Government Index provides scores and rankings on four dimensions of government openness: publicized laws and government data, right to information, civic participation, and complaint mechanisms. The index includes data from 102 countries. Each country was evaluated on a 0-1 scale (0 - low rate of openness, 1 - high rate of openness). According to the 2015 data, Georgia received a score of 0.61, Moldova - 0.55, and Estonia - 0.72. The Open Government Index of 2015 does not include data from Armenia and Azerbaijan.

Rule of Law Index examines how the rule of law is implemented on the grassroots level (0 – low level of the rule of law, 1 – high level). The Index includes following 8 principal categories of the indicators: Constraints on Government Powers, Absence of Corruption, Open Government, Fundamental Rights, Order and Security, Regulatory Enforcement, Civil Justice, and Criminal Justice. Rule of Law Index examines 102 countries. According to the 2015 data, Georgia scored – 0.65, Moldova – 0.48, while Estonia gained the highest 0.77 score. (Figure 2) 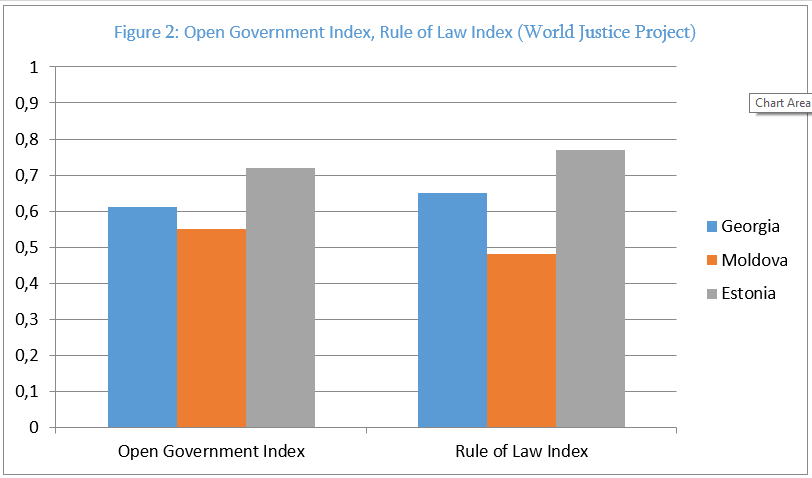 The Open Budget Index of International Budget Partnership is the only ranking that regularly evaluates transparency and accountability of the budgets worldwide (100-point scale, 100 – transparent). The Index measures whether the governments ensure public access to comprehensive national budget information as defined by international standards on fiscal transparency (IMFs Code of Fiscal Transparency, INTOSAI's Lima Declaration, OECD Best Practices for Budget Transparency) and it includes 3 main categories: budget transparency, budget participation (engagement of civil society in determining how to allocate/spend money), budget oversight. 102 countries have been measured in 2015. According to the data, Georgia has 66.38 points and Azerbaijan - 50.88.

Center for Law and Democracy runs RTI Rating to assess the strength of the legal framework for the right to information. RTI Rating uses 61 indicators divided into 7 categories: Right to access, Scope, Requesting Procedures, Exceptions and Refusals, Appeals, Sanctions and Protections, and Promotional Measures. 2015 RTI Rating ranks Moldova at 16th place with 110 points out of total 150 points, Azerbaijan at 11th with 115 points, Georgia at 32nd with 97 points, Armenia at 34th with 96 points and Estonia at 38th place with 94 points. (Figure 3)

Corruption Perception Index annually published by the Transparency International assesses how corrupt a country’s public sector is perceived to be (0 – high corruption level, 100 – free of corruption). CPI is the most widely used indicator of corruption worldwide and in 2015 it assessed 168 countries. 2015 data ranks Georgia at 48th place with 58 points, Estonia at 23th with 70 points, Armenia at 95th with 35 points, Azerbaijan at 119th with 29 points and Moldova at 103th place with 33 points. (Figure 4) 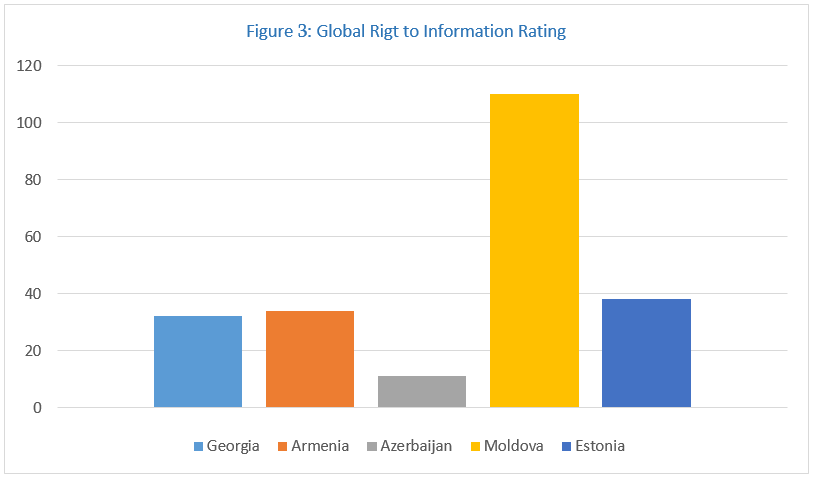 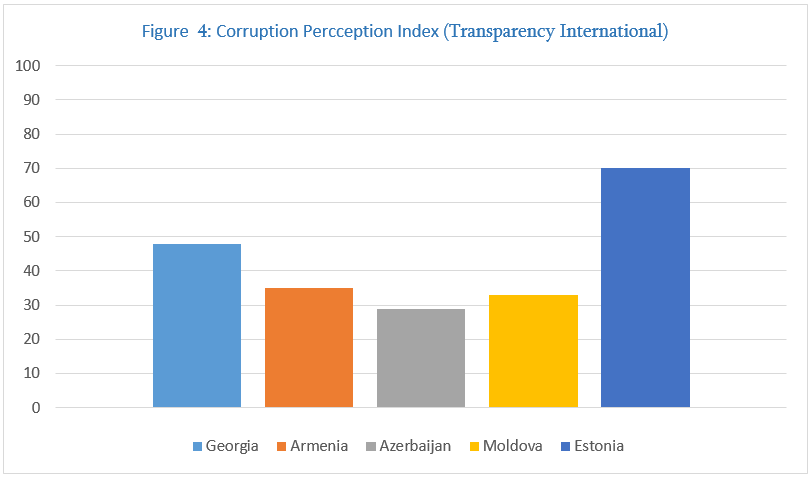 The Governance Data Alliance also includes four researches of the Freedom House: Freedom in the World, Freedom of the Press, Freedom on the Net, Nations in Transit (measures progress and setbacks in democratization in 29 countries from Central Europe and Central Asia). 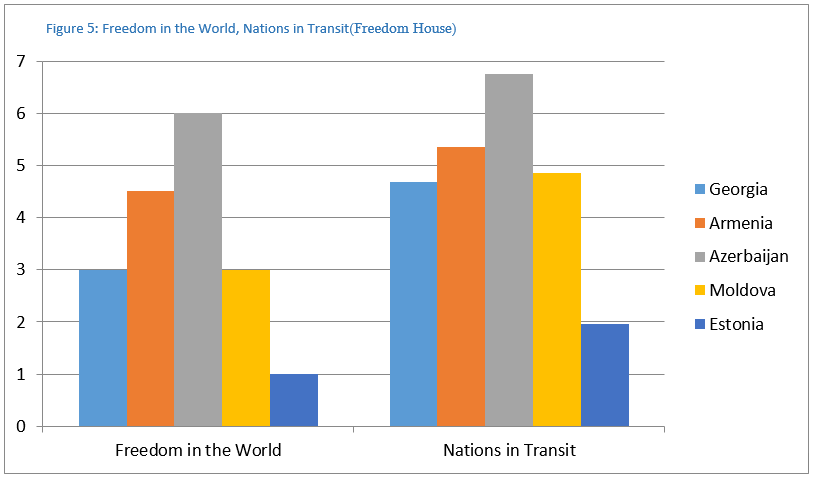 Freedom of the Press assesses a press freedom on the scale of 0 (best) – 100 (worst) in 199 countries and territories. The scores ascribed to each of the countries determine its status (free, partly free, not free) in regards to total press freedom. According to the rating, Georgia has 48 points (partly free), Azerbaijan – 87 (not free), Armenia – 61 (not free), Moldova – 55 (partly free), Estonia – 16 (free).

The 2015 report of the Governance Data Alliance includes the list of countries, published by the Open Government Partnership, that were actively involved in the elaboration of national action plans and were regularly consulting Civil Society Organizations in this process. The list includes: Georgia, Armenia, Moldova and Estonia, but not Azerbaijan.