Compared to 2017, Georgia took 9 steps forward in Global Innovation Index in 2018. Instead of the 68th, it took the 59th position and gained highest - 35.05 score over the recent years.

According to the World Bank, as a main source of economic growth innovations have always had a crucial role in many countries’ economic and social development. As it raises productivity, creates competitive environment and improves quality of living standards, innovation is a chance of developing countries to follow and catch up developed world and improve living standards with sustainable development.

Because of its importance, the level of innovation in the countries is being measured with Global Innovation Index for the last 11 years. Research is published every year by Cornell University, INSEAD and the World Intellectual Property Organization (WIPO).

Global Innovation Index (GII) aims to capture the multi-dimensional facets of innovation and provide the tools that can assist in tailoring policies to promote long-term output growth, improved productivity, and job growth. GII includes 80 indicators that are integrated in the following 7 groups:

GII defines ranking of 126 countries. It also defines most innovative regions according to the countries’ results. It should be highlighted that countries with strong economy and diverse industry always hold leading positions in the ranking. According to the 11th edition of GII, Switzerland holds the first position with 68,4 score (from 100). It keeps the leadership over the last 8 years. Next 5 places are held by Netherlands, Sweden, Great Britain and Singapore.

It is worth mentioning that in last three years the following ten countries keep their leading positions with slight changes, where Switzerland has always been a leader. 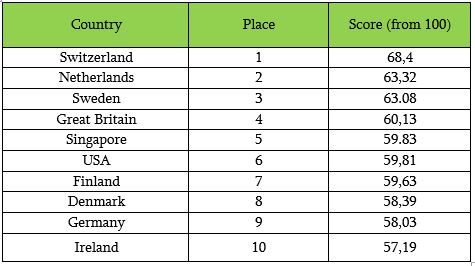 GII makes analyses according to the different types of incomes (high, upper-middle, lower-middle and low incomes) and presents rankings of the countries with the same types of incomes. According to the authors, the progress of China is promising for the countries with middle-income economics. In this context, China’s rise in the GII rankings over the last few years has been spectacular. Since 2016 China has featured in the top 25 group and has consistently moved upward in the rankings to the 17th  this year. The only middle income economy that continues to edge closer to the top 25 is Malaysia (35th).

Georgia’s results in GII 2018 and its overview

Georgia was nominated among the 20 states that outperform on innovation relative to their level of development. Together with Georgia the following states are in that group: Moldova, Vietnam, India, Kenya, Armenia, Ukraine, Mongolia, Malawi, Republic of Mozambique, Rwanda, Thailand, Montenegro, Bulgaria, Madagascar, Serbia, Republic of Costa Rica, South Africa, Tunisia and Colombia.

Georgia holds 6th place in 30 countries with lower-middle income economics after Ukraine, Vietnam, Moldova, Mongolia and India, while Tunisia, Armenia, Philippines and Morocco hold behind it. It should be highlighted that in 30 countries with lower-middle income economics, according to the innovation input sub index, Georgia holds the first position and the 7th position with innovation output index.

In GII 2018 the 59th position of Georgia was caused by the ranking of the components illustrated on the chart below: 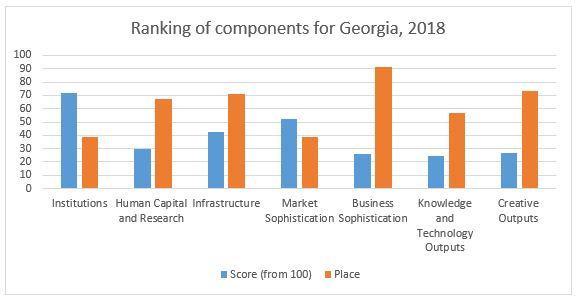 As for weaknesses, Business Sophistication (holding the 91st position with 25,7 score) that covers knowledge workers, innovation linkages, knowledge absorption and Creative Outputs (the 73rd  position with 26,8 score) that includes intangible assets, creative goods and services, online creativity, hinder progress. It is worth mentioning that Georgia improved situation in Human Capital and Research and compared to 2017 took step forward to the 67th position with 30 scores from the 89th position with 24 scores.

As it has already mentioned before, Georgia improved its position by 9 steps and gained the biggest score (35,05) over the recent years. The diagram bellow illustrates  last 5 years’ data for Georgia:

In 2017 Georgia stopped recent sustainable progress in ranking. Compared to 2016, Georgia moved back in 2017 from the 64th (with 33.86 score) to the 68th position (with 34,39 score). Supposedly, moving back is not caused by the slower development processes of GII components but by having slower developing temp than the other countries. [1]

If we compare data of Georgia and other countries in region and neighborhood [2], we will see that in 2018 Georgia has got better results than Armenia and in general it has better situation than Azerbaijan and Belarus. But Georgia remains behind Turkey with nine, Moldova with eleven, Russia with thirteen and Ukraine with sixteen positions.

The chart below shows the ranking for the countries in the region and neighborhood for the last 5 years:

Improving Georgia’s position in GII ranking is welcoming. However, it should be mentioned that Georgia faces important challenges, that needs complex and comprehensive approach. Georgia is mentioned as a country having a law innovation culture in the strategy for Georgia prepared by European Bank for Reconstruction and Development (EBRD). According to the document the main reason of having law innovation culture is that law and medium sized enterprises do not invest in research and development in Georgia. This hinders innovations and therefore displays unattractive results.

In order to plan proper activities that will improve situation and make contributions in sustainable economic development, it is important for GII results to be perceived and analyzed properly by competent authorities of Georgia.

[2] Data is compared with EaP and neighboring countries