Georgia in 2017 Index of Economic Freedom

Georgia gained 10 positions in the 2017 Index of Economic Freedom and currently holds the 13th position among 180 countries, which places it ahead of all of its neighbors, and almost all European and former Soviet countries. Georgia holds the 5th place among European countries and is only behind Switzerland, Estonia, Ireland and Great Britain. 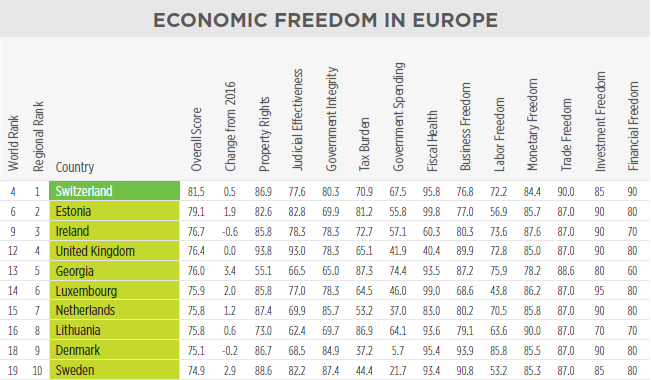 Georgia did not regress in any component of the index. Its overall progress was mostly due to improvement of property rights protection and government integrity. However, these two components remain the weakest areas of the country’s economic freedom.

According to the authors of the index, Georgia’s main problem is lack of judicial independence: “Although the constitution and law provide for an independent judiciary, there has been little progress in the past year on judicial reforms, and the government does not fully respect judicial independence.”

Georgia has relatively low scores in the following 3 of the 12 components of economic freedom:

This component evaluates the extent to which the judicial system is fair and efficient, in order to protect citizens' rights and take appropriate legal measures against violations. The component includes evaluations of the quality of trials, and judicial independence and impartiality.

This component measures the level of corruption in the country. The component includes the scale of corruption and bribery, their perception by the public, level of public trust in politicians, and the transparency of the government and the public service.

Financial freedom is an indicator of banking efficiency as well as a measure of independence from government control and interference in the financial sector.

Georgia received its highest scores in the following 5 components:

Georgia received scores highest than most European countries in the remaining three components. However, in order to correctly understand this difference, these results need to be put in context.

The Index of Economic Freedom is run by The Heritage Foundation, which has a declared mission of promoting conservative public policy. This means that the index considers lower taxes, smaller government, and fewer labor regulations to be better for the economy, which is a view not shared by most European countries. As it happens, the situation in Georgia is closer to the political and economic stance of the authors of the index.

This component measures how high taxes are in a country. The authors of the index believe that high taxes impose an unnecessary burden on the economy. For this reason, countries with low taxes, such as Georgia, are granted a high score.

The authors of the index believe that low regulation of the labor market is good for the economy. For this reason, countries with less strict labor regulations, such as Georgia, are granted a high score.

According to the authors of the index, Georgia has largely succeeded in ensuring the freedom of its economy. Public debt and budget deficits remain under control. Open-market policies, supported by competitively low tax rates and regulatory efficiency, have facilitated flows of trade and investment. Anticorruption efforts have also yielded some notable results.

However, rule of law and especially judicial freedom and efficiency remain a challenge. According to the index, deeper and more rapid institutional reforms in these areas are needed to ensure further dynamic and lasting economic development. 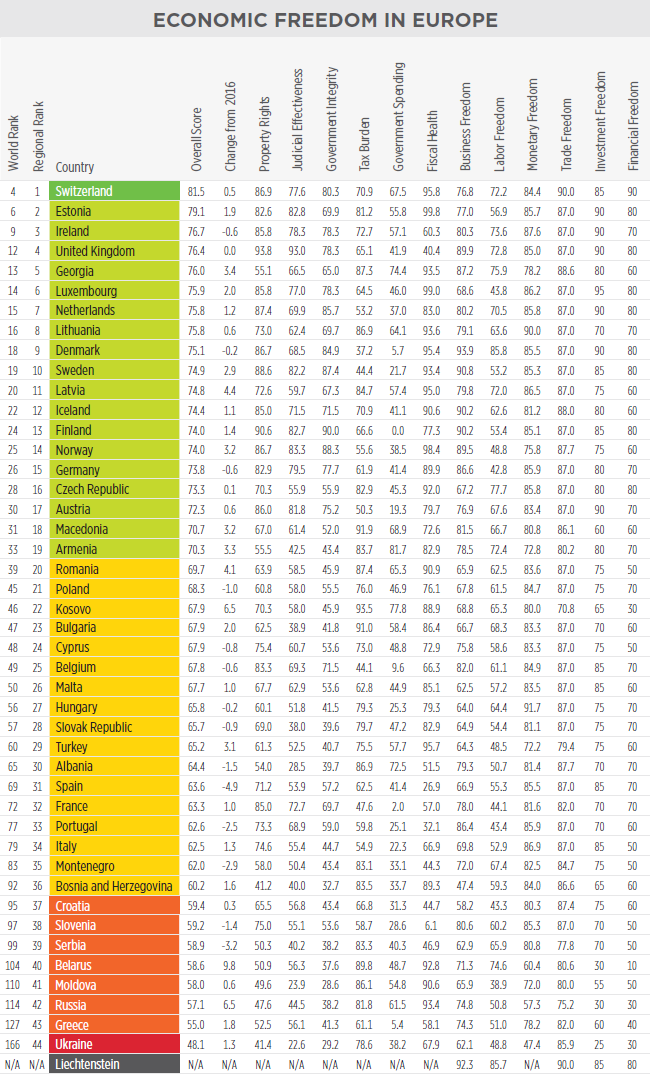