On 15th January 2014 the first meeting of the Open Government Georgia Forum was held at the Ministry of Justice of Georgia. It was attended by the representatives of several public institutions and non-governmental organizations. The Forum will meet monthly to plan activities and assess the progress of the implementation of OGP action plan of Georgia. (See the protocol of the meeting)

During the first phase of the meeting, the discussion mainly focused on the format of the renewed Forum. Previously the NGO Forum was renamed to Open Government Georgia Forum, with several changes in its format, membership and guidelines. The participants felt that membership should not be limited to the representatives of those public institutions that were directly responsible for implementing the commitments for OGP. Instead, any public institution should be able to participate. The Forum also wishes to invite representatives of the private sector and academic circles to attend the meetings, which will be held on the first Wednesday of every month. The idea to create an online mechanism for those who could not directly attend the meetings was also voiced by some participants.

The participants discussed the plans for public consultations during the development of the 2014-2015 action plan for Open Government Partnership. Both the NGOs and the public institutions expressed their willingness to use their regional branches for conducting the consultations. Apart from this, the civil society agreed to meet and discuss their vision of the plan for consultations and present it to the Forum on the next meeting.

The representatives of the Ministry of Justice and three of its LEPLs, Data Exchange Agency, Public Service Hall and State Services Development Agency, once again discussed their commitments for the OGP action plan, all of which were well received by other members of the Forum. Therefore, for the next monthly meeting, these institutions will prepare detailed description of the commitments following the guidelines established by the Partnership and present them to other participants. 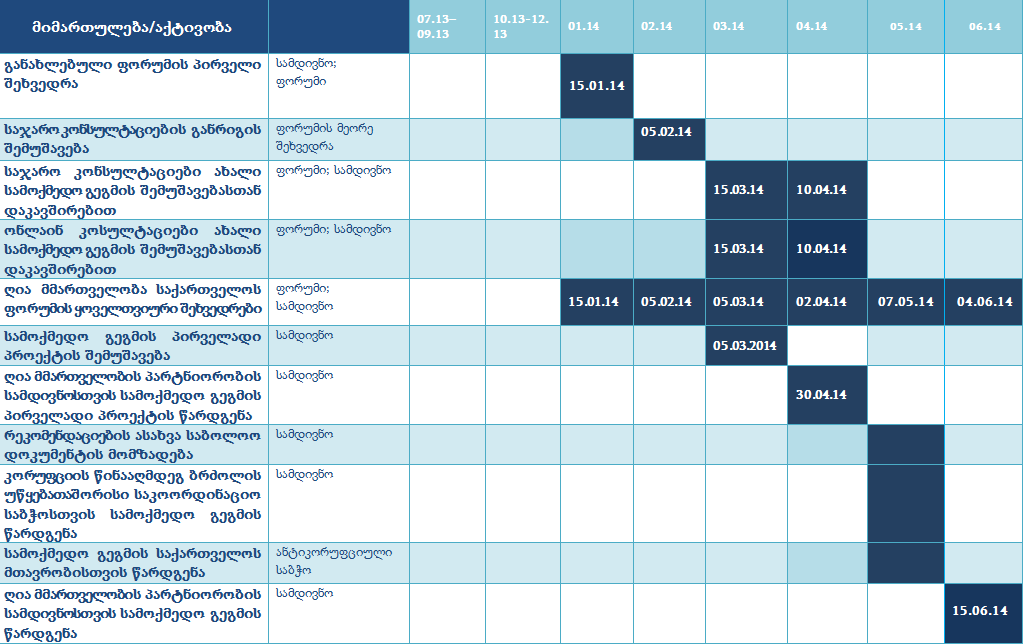 A significant portion of the meeting was devoted to the discussion of the Open Data portal (data.gov.ge) and its supposed format. The representative of Data Exchange Agency, Irakli Gvenetadze, introduced the plans to organize workshops for discussing this very topic with experts from Germany and Austria within the frameworks of the Twinning program for strengthening e-governance. The workshop will be held at the end of January and can be attended by NGOs.

Another important aspect of the action plan was the citizen’s portal Ichange.ge that was part of the previous action plan, but could not be implemented in time. The Institute for Development of Freedom of Information (IDFI) and the Georgian Young Lawyers’ Association (GYLA) have separately prepared the concept of the portal. They will present these during one of the future meetings, which will be fully devoted to the discussion of Ichange.ge.

Finally, the participants discussed the opportunities for raising the awareness of the general public regarding Open Government Partnership and Georgia’s involvement in the initiative. IDFI and GYLA voiced an opinion that several TV programs should be devoted to this topic and expressed their willingness to provide assistance in this process.