Fifth OGP Forum Meeting at the Ministry of Justice of Georgia

On April 29 Ministry of Justice of Georgia hosted the fifth OGP forum meeting. Forumaimed at discussing the draft version of the OGP Action Plan which will be presented to the Steering Committee of Open Government Partnership on April 30, while the final version must be submitted by June 15. The meeting, attended by the representatives of the public institutions and civil society, discussed the relevance of the taken commitments with the aims and challenges of OGP; in the end of the meeting, the representatives of NGOs made the attendants familiar with their recommendations.

Rapporteur of the Open Government Georgia Forum, head of the Analytical Department of Ministry of Justice, Rusudan Mikhelidze talked about the OGP regional meeting in Dublin, which will take place on May 8-9. OGP member states will present the draft action plans. Georgia will be represented by the Ministry of Justice and the representatives of the civil society.

Rusudan Mikhelidze also concerned the issue of OGP Award, which is granted to the innovative project, complying with the objectives of OGP. The representative of OSGF, Vako Natsvlishvili proposed nominating the memorandum signed between the Parliament of Georgia and the civil society organizations in December 2013; this memorandum aims at creating the concept for the relations between the state and public bodies.

The forum participants also talked about the elections of OGP Steering Committee and the chances of Georgia on these elections. As it was noted, this will be the first case of electing the members of the committee and considering the Georgian achievements in terms of OGP commitments, our country has chance to become the member of the committee.

The second part of the meeting was dedicated to discussing the commitments defined in the 2014-2015 draft action plan. The commitments cover four challenges: public service, increase of public participation, improved management of public resources and creating safe environment. 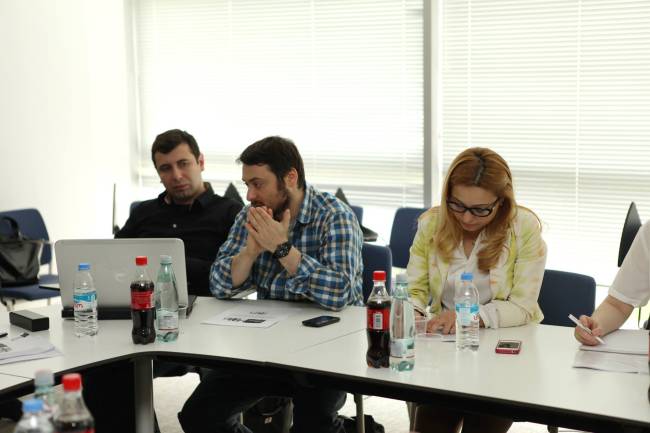 Participants discussed each commitment, their relevance to the OGP challenges and as a result, several commitments were taken out of the list, some of them were moved to other category. The draft version of the action plan will be discussed on the national and later, on the international level, which will be followed by further remarks and recommendations about certain issues. Forum also discussed the criteria of defining the risks as well as talked about the indicators of success of the commitments.

The meeting was finished by introducing the recommendations of the NGOs, which consist of four parts. First one encourages the parliament to introduce the citizen petition platform. This recommendation was grounded by the experience of European countries. Second recommendation aims at involving the citizens in the law-making process through enabling them to comment on the draft laws. According to the third recommendation, Ministry of Internal Affairs must provide the access to the crime map and the information about the road safety and the incidents. As for the last recommendation, according to it, legislation on surveillance must be improved since the practice of surveillance still remain to be one of the most problematic issues.

Forum meetings will be intensively conducted until June 15, in order to ensure to submit the improved version of the action plan.