The main concern of the First Republic of Georgia (1918-1921) was to gain the recognition and support of the European countries, which was not an easy task, considering the political reality of that period and the international developments in Europe. The political elite of the country realized that, without the support of Europe, it would be impossible to counter empowered Russia. The foreign service of Georgia worked hard to achieve these goals and, in most cases, succeeded.

During the period of the First republic of Georgia, in 1918-1921, two plenipotentiary embassies, that the Georgia managed to open, functioned in Berlin, Germany and Stockholm, Sweden. Unfortunately, the diplomatic representatives in the other countries did not manage to get a plenipotentiary form – recognition from the host state. Later, in 1921, the new embassy was established in Paris. However, the newly-appointed ambassador, Akaki Chkhenkeli, presented a letter of credence to the President of France, Millerand on 25 February 1921, the day on which the Bolsheviks occupied Tbilisi.

Based on the above-said, the diplomatic relations between Georgia and the Kingdom of Sweden were very important for the diplomatic history of the Democratic Republic of Georgia. The Institute for Development of Freedom of Information (IDFI) presents several documents that are preserved at the Archives of the Ministry of Foreign Affairs of Sweden. These documents mainly depict the official correspondence about the appointment, dismissal and relocation of the diplomatic representatives of Georgia. These documents clearly show the positive attitude the Scandinavian countries and especially Sweden had toward the First Republic of Georgia.

The Georgian diplomatic representatives in Sweden played an important role, because already in the beginning of the 1990s, the capital of Sweden and especially the Embassy of Germany were the center of activities aimed against the Russian Empire. According to the intelligence note created in December 1916, Ivane Javakhishvili secretly visited Stockholm and held negotiations concerning the independence of Georgia with the Ambassador of Germany. [1] There was an active communication with the “Liberation Committee of Georgia”, which functioned in Europe in that period.

An intelligence note about Ivane Javakhishvili’s secret visit to Sweden, sent to the vicegerent of the Emperor on the public issues in the Caucasus: “Javakhov had allegedly incognito visit to Stockholm where he held talks about Georgia with the Ambassador of Germany. The content of these talks are being kept secret. Javakhov – a historian, ardent supporter of autonomy and federalism, basis his conclusions on historical documents”. 15 December 1916. Source: National Archives of Georgia.

Therefore, the establishment of the plenipotentiary embassy in a powerful European country, which opposed Russia and would also cover the other Scandinavian countries, was of paramount importance for the Democratic Republic of Georgia as a newly-established independent country.

Sweden was less damaged in the First World War. Regardless of the pro-German attitudes in politics, the country declared neutrality from the very beginning and, during the first years of the war, continued trade with the allied countries as well as Germany. This situation lasted until 1917, when the iron export of the country declines and the supply crisis and internal unrests began. As a result, the Conservative Government had to resign and the Social-Democrats came to power. [2]

Not surprisingly, Sweden’s interest toward the First Republic of Georgia was facilitated by its natural recourses and the geopolitical location. The deposits of manganese played an important role in the militaristic industry of that period and the regions of Upper Imereti were rich in this mineral. Also, Baku oil industry, second largest in the world, was an important factor as long as the only way for transporting it was through Batumi port. [3] Ideological unity between the social-democratic governments was another important factor. All of these facilitated the establishment of friendly relations between Sweden and Georgia.

In 1918, the Government of Georgia decided to establish diplomatic representation of Georgia in the Kingdoms of Sweden and Norway. For this, the Minister of Foreign Affairs of Georgia, Akaki Chkhenkeli addressed to the Minister of Foreign Affairs of Sweden, Johannes Hellnor. Chkhenkeli presented Mikheil (Mikhako) Tsereteli, as a candidate on the post of the representative of Georgia in Sweden, and expressed his hope that the Swedish government would support him. 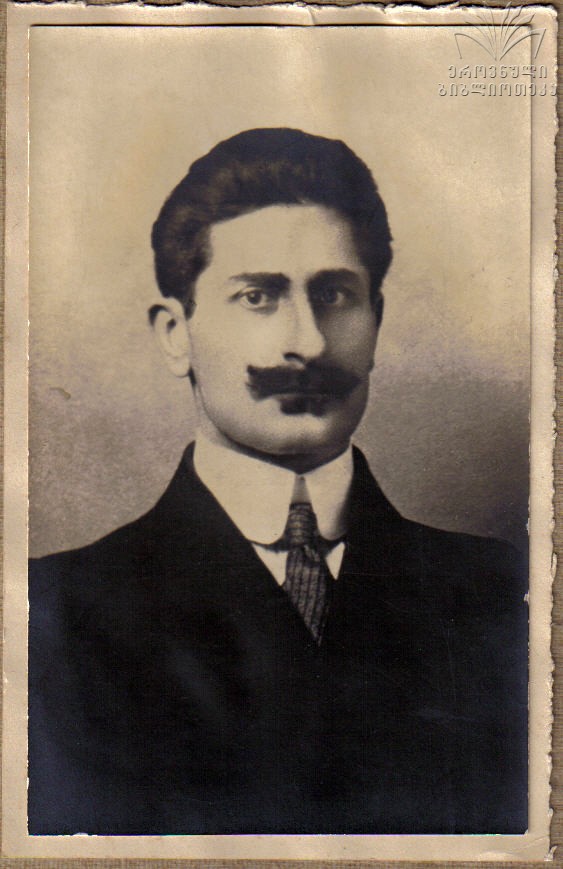 “The Government of the Republic of Georgia desires to have relations with the Kingdom of Sweden and, for this purpose, appoint a representative to the Swedish Government, a citizen of the Republic, Mr. Mikheil Tsereteli. 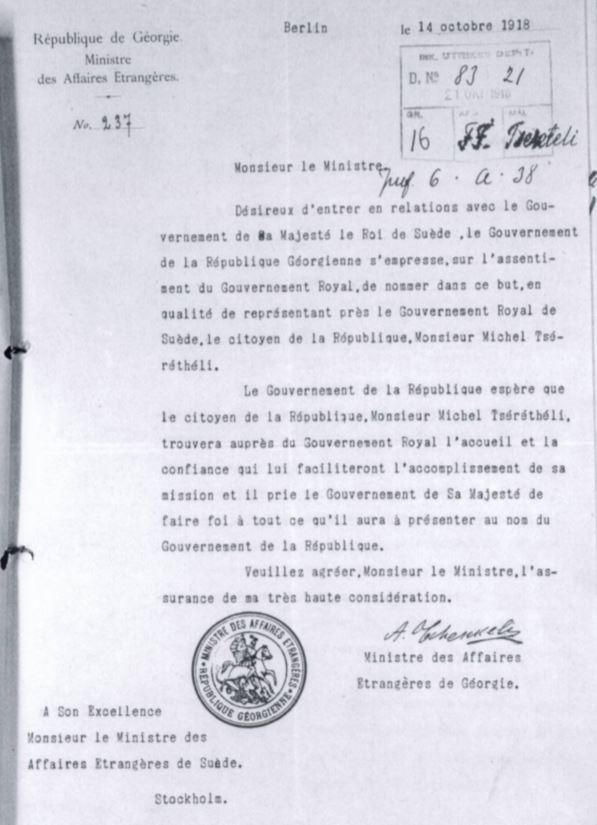 Akaki Chkhenkeli’s letter from Berlin on appointing Mikhako Tsereteli as an Ambassador. 14 October 1918. Source: Archives of the Ministry of Foreign Affairs of Sweden.

After receiving agrément from the Swedish government, by 19 October 1918, Mikhako Tsereteli officially arrived to Stockholm for presenting the letter of credence to the King of Sweden, Gustaf V and started his diplomatic work. The Embassy was temporarily based in Hotel Regina and later (by 16 January 1919) it was moved to the city center, 3, Tegnérlunden Street. The opening of Embassy in Sweden had two objectives: support of Georgia’s independence and the enhancement of trade and economic ties. 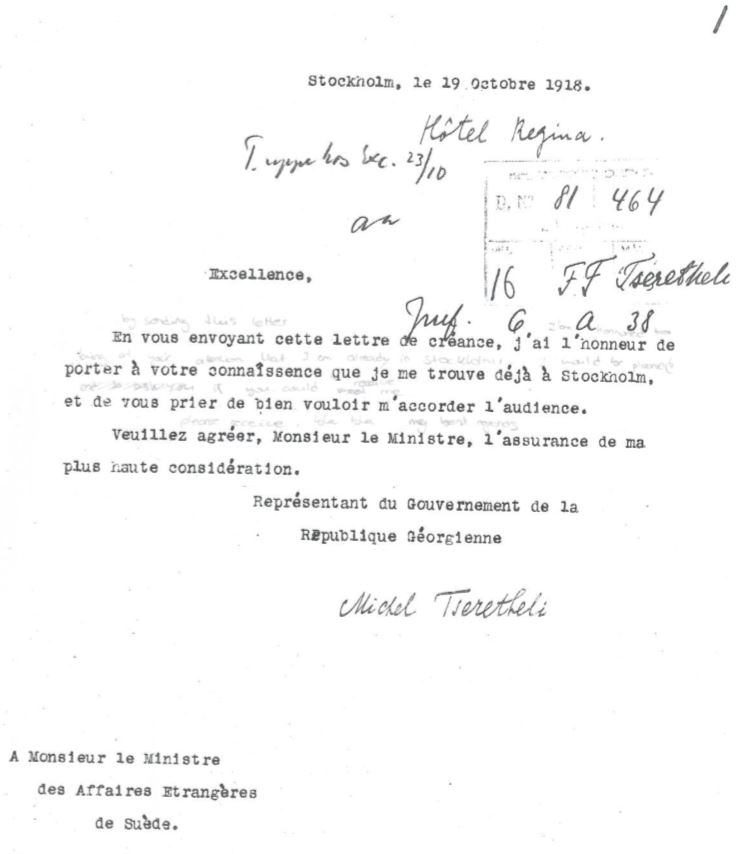 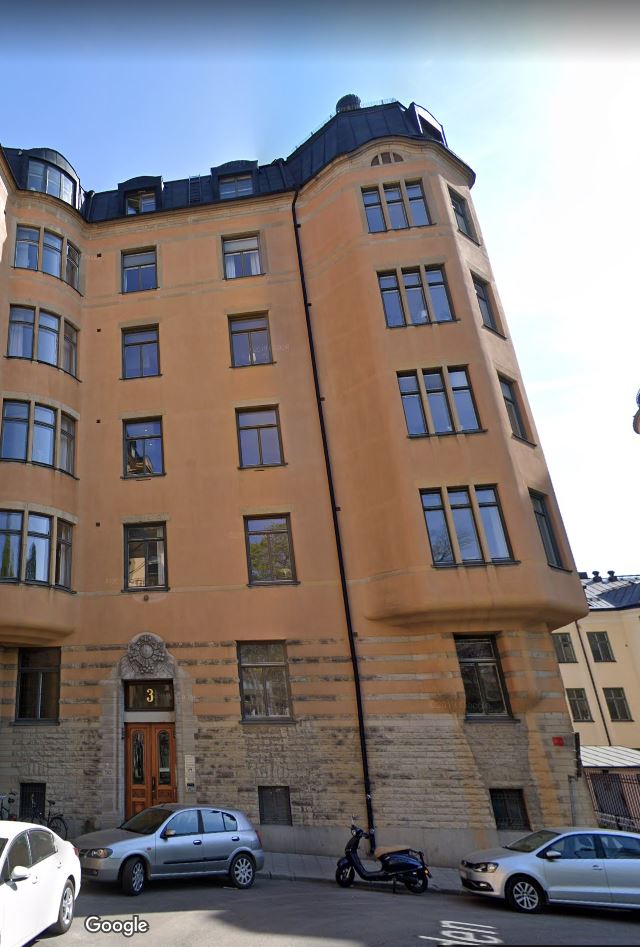 On November 26, 1918, after Mikhako Tsreteli’s moving to another position (he returned to Georgia and started working at the newly-opened university in Tbilisi), Aristotele (Aristo) Chumbadze was appointed as an Ambassador of Georgia in Sweden. It should be noted that the process of handing over the Embassy and Chumbadze’s rotation was procrastinated and the Minister of Foreign Affairs of Sweden, Hellnor allowed Tsereteli to stay in Sweden and extended his passport. 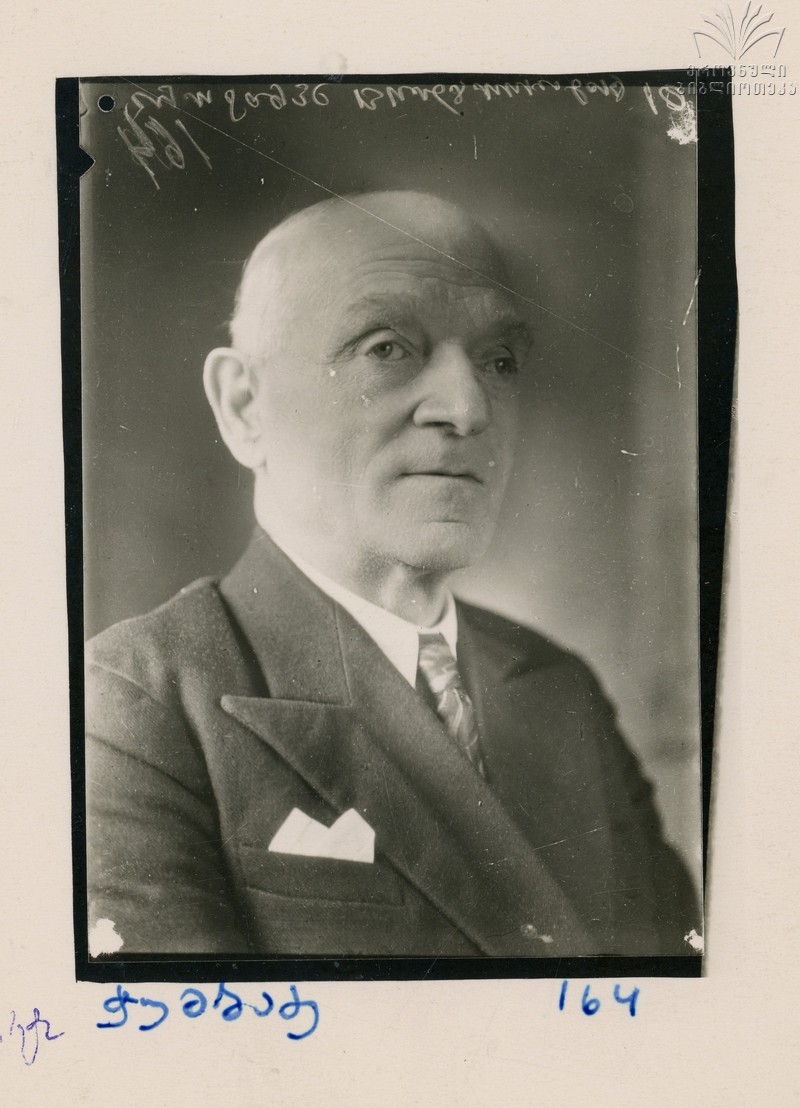 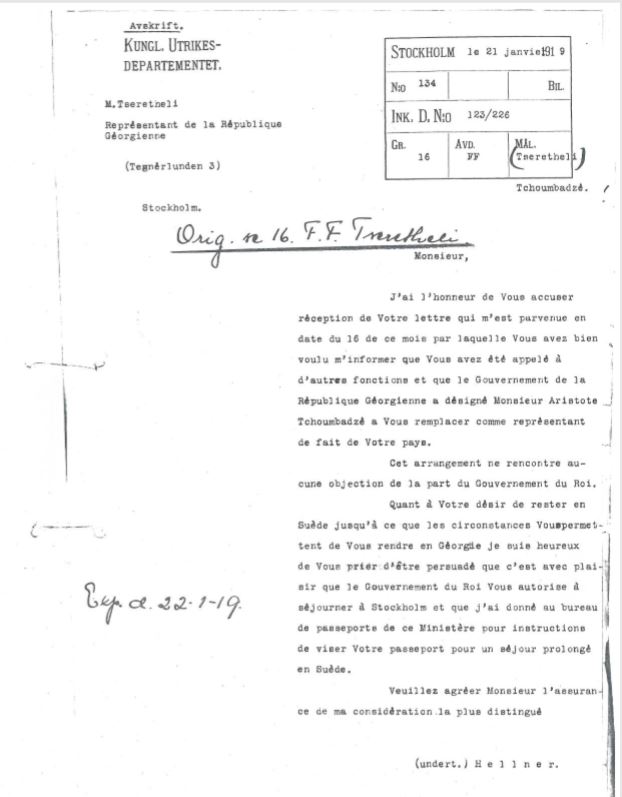 Since then, the main objective of the Embassy of Georgia in Sweden has become an active work for official Stockholm and Oslo to support Georgia at the Versailles Peace Conference. As a result, finally, in 1920, the secretariat on the issue of Georgia’s membership was created in the League of Nations. Swedish MP, Theodor Adelsward (former Minister of Finances in 1911-1917) and famous Norwegian politician, reporter on Georgian issues and active supporter, Fridtjof Nansen (in 1922 he received the Nobel Peace Prize) were the member of the secretariat. Through their active work, in which the delegations of the other countries were also involved, in 1921, Georgia was recognized de jure. 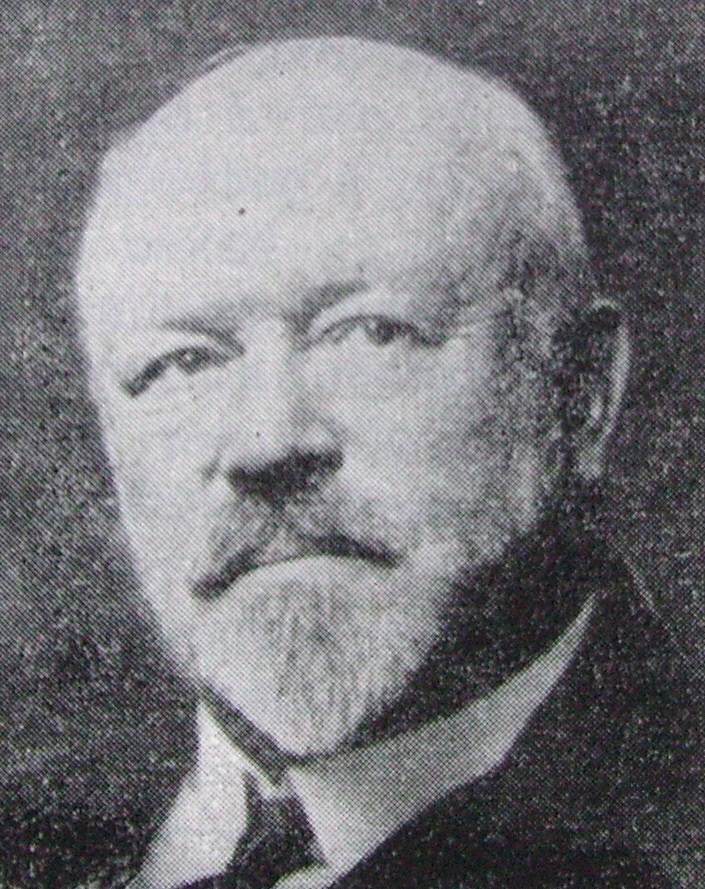 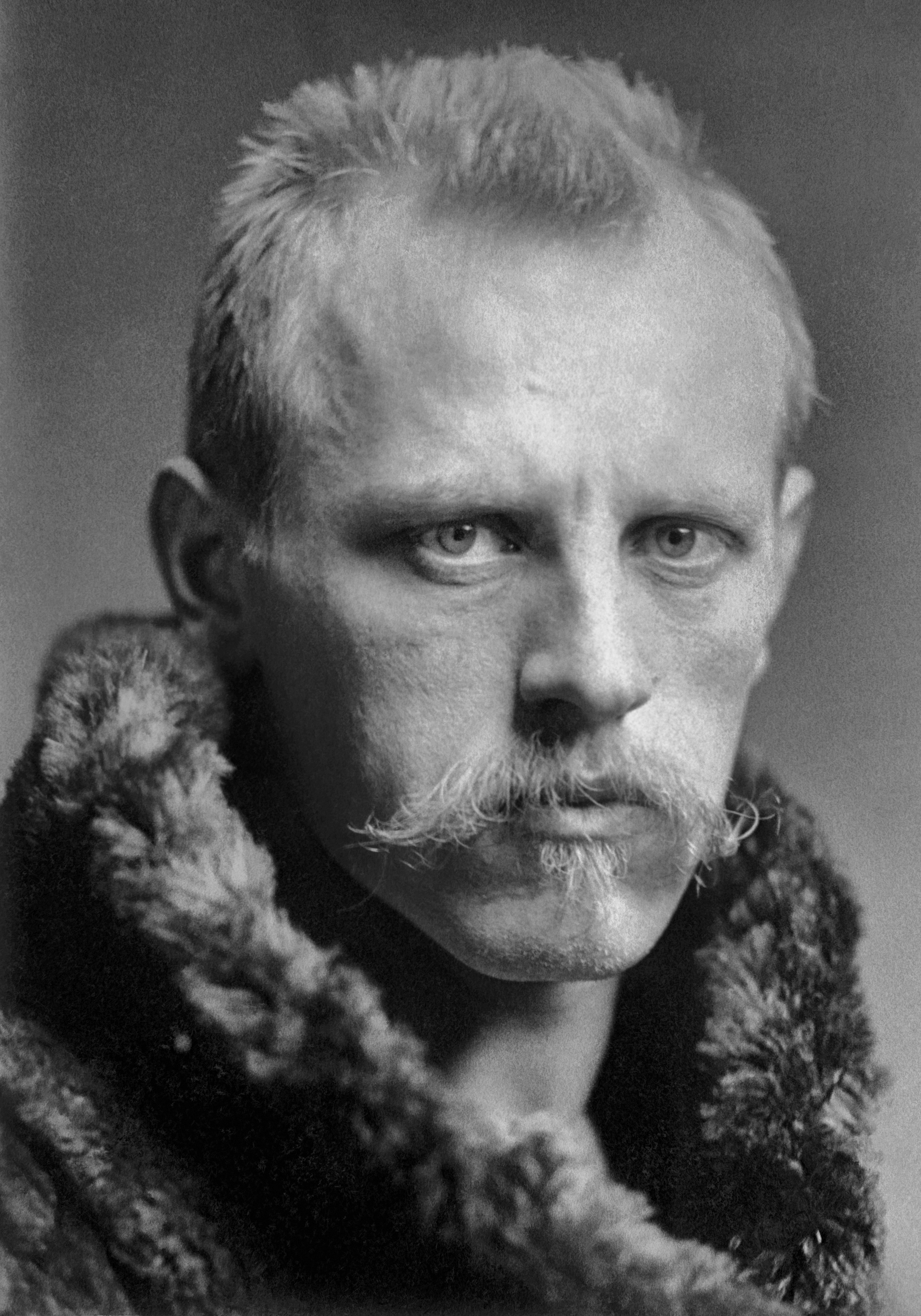 The Embassy of Georgia, due to financial difficulties, could not function in Sweden for too long and in June 1920, Aristo Chumbadze had to close the Embassy. The representative of Georgia in Berlin, Vladimir Akhmeteli was ordered to perform his obligations. [4]

In his farewell letter, on 14 June 1920, Aristo Chumbudze wrote to the Minister of Foreign Affairs: “Through your active support, I’ve been a representative of the interests of the Georgian people. The Georgian people should never forget the moral Sweden has shown in the difficult period, which resulted in the official recognition of the young Democratic Republic. The interests of both of our people in terms of culture and economy require more active approach. Therefore, I am leaving with the hope that, in the future, your majesty will still support us on our way of the implementation of this important task”. 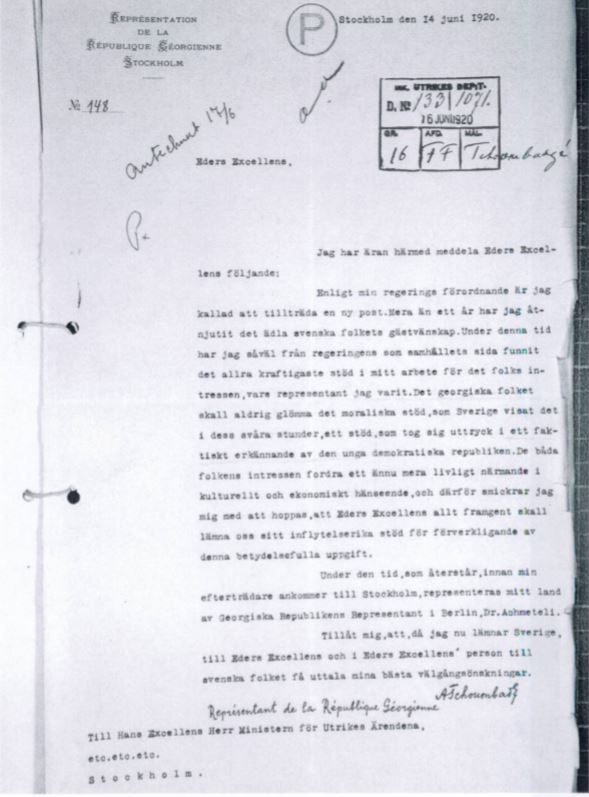 Unfortunately, the functioning of the Embassy of Georgia in Sweden was very short-lived. However, it should be mentioned that the part of the objectives, set while establishing the Embassy, had not been achieved. The short excerpt from the 1920 newspaper “Sakartvelos respublika” well explains the reasons why the relations between the two countries have not continued and developed:

“Plenipotentiary representative of Georgia in Scandinavia, Aristo Chumbadze returned to Georgia. He said that Sweden, Norway and Denmark are the first countries that recognized the independence of Georgia. According to him, the local press expressed a great interest toward Georgia. He said that the business circles are very interested but they avoid taking practical steps”. [5]

It was very risky for private or even state companies to enter the region which was constantly threatened by Bolshevik Russia. The anti-Bolshevik revolutionary powers, so-called White Movement was widely supported by a number of European countries during the Civil War in Russia. The Whites gradually ceded their positions and by 1920 they had already lost the North Caucasus, which has affected the policy of European countries toward the South Caucasus. The Bolsheviks dominated oil-rich Azerbaijan, then they turned Armenia into red and it was not hard to guess that Georgia was next. Shortly, due to the great recourses and geopolitical interests, first Britain and then some other European countries started finding common language with the Bolsheviks. This did not leave Sweden and the other friendly European countries a chance to help Georgia…

[3] Ghambashidze, David (1918), The Caucasian petroleum industry and its importance for Eastern Europe and Asia, Londra, The Anglo-Georgian Society.