Beginning with November 9, 2020, a curfew was enacted in 7 major cities of Georgia. This decision by the Government of Georgia was met with sharp political and judicial criticism. The large-scale restriction of the freedom of movement was assessed as an unconstitutional restiriction by the Public Defender (Ombudsman), civil society representatives and political parties. A filing of the constitutional lawsuits was announced, while the Chairman of the Parliament reminded the persons who had been fined of the possibility of addressing the Constitutional Court.

During the first 2 months, the Constitutional Court was effective in considering the lawsuits related to the pandemic. In the 50 days after the first lawsuit had been filed, the Court litigated 8 cases in the format of a preliminary sessions. 5 Complaints were taken into consideration on the merits and average reaction time was 8 days.  Notably, two of those case was considered on merits on the public hearings within 20 days from the registration of the respective complaints. Consequently, this gave rise to an expectation in the public that the constitutional control over the cases related to the pandemic would be effective and that final judgments would be issued in a timely manner. This expectation was not met. 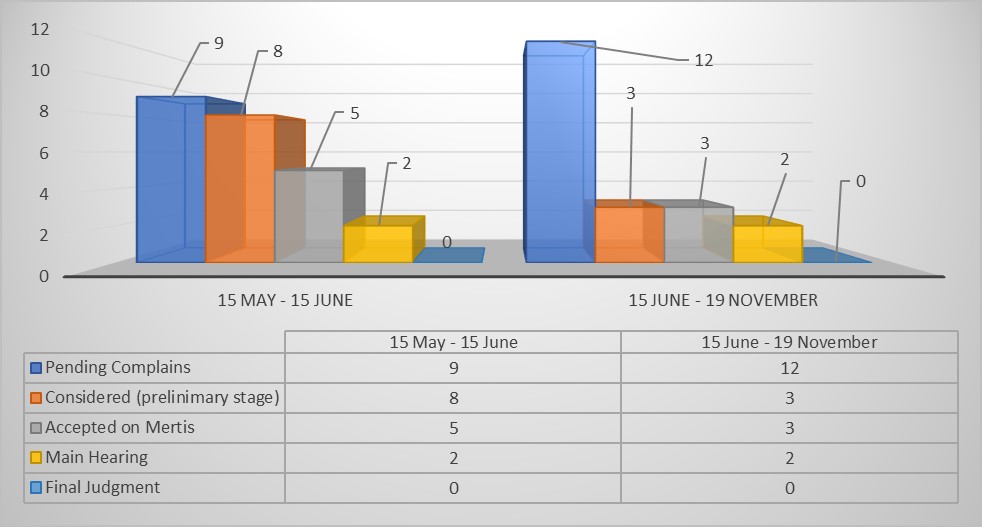 Circumstances shifted radically following June. During the last 6 months, the Constitutional Court has not considered any new lawsuits related to the pandemic on merits, nor has it delivered a final judgment on the complaints that had been filed previously.

The effectiveness of the Constitutional Court is being critically impeded by the inactivity of the first chamber. Specifically, this Chamber was assigned all lawsuits related to the active restrictions enacted during the pandemic. Including the principal cases where the Constitutionality of the Article 453of the Law of Georgia “On Public Health” are challenged.   In June, after a newly elected Justice Vasil Roinisvhili, was appointed as Chairperson of the First Chamber, the level of activity of the Chamber in regard to Covid-19 Cases fell to zero.  It remained so till the November.

On 19th of November First Chamber Published 3 recording notices and accepted respective constitutional Complaints on merits. Average reaction time was 130 days. To compare, the reaction time of the same chamber toward the cases of pandemic was 10 days. It is notable, that legal provision that has principal importance for deciding the constitutionality of the pandemic measures had already been accepted on merits 6 months ago (on 5th of June 2020). In other words, during the last 6 months the First Chamber of the Constitutional Court had chance to decide major legal concern and establish respective constitutional standards. However, the Chamber has not taken further actions toward that case yet. 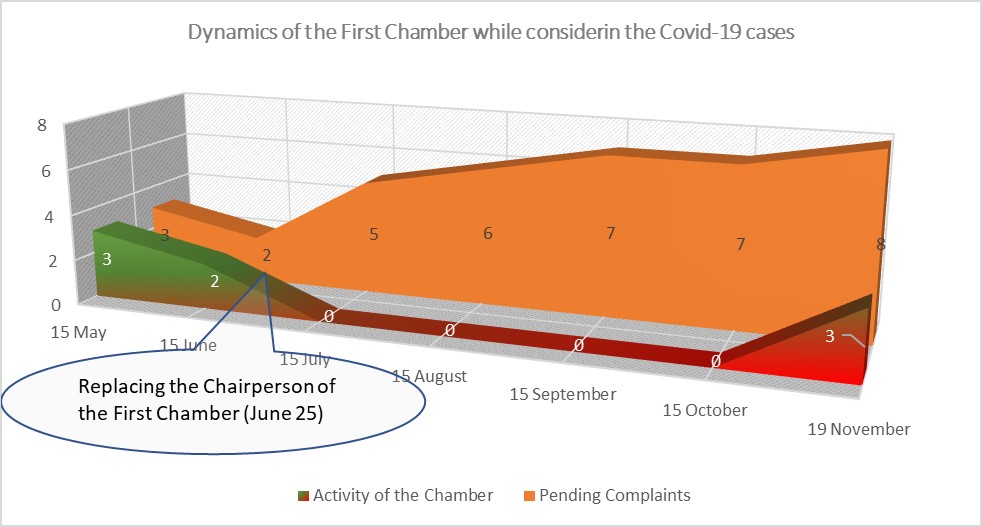 This kind of coincidence creates the impression that the Court is purposefully avoiding deciding the Covid-19 cases in an effective and timely manner, and that it is waiting for the disputed norms to become invalid (it will become invalid from the end of the 2020). Simultaneously, the situation gives rise to the feeling that the Constitutional Court has lost the will and/or ability to effectively and swiftly react to the constitutional problems related to Covid-19.

To Conclude, the court had and still has possibility to effectively react toward the alleged violations of the constitution but it did not. Moreover, according to the data It is highly likely that the first chamber will not deliver already overdue judgment toward the constitutionality of the current legal model of Covid-19 management until it is in force.  In addition, the court is still deciding the cases regarding the first state of emergency where there is ongoing discussion for announcing the second one.

It is crucially important for the Constitutional Court to match the pace of the judicial challenges created by the spread of the novel coronavirus and effectively implement the mandate granted to the Court by the Constitution. Delaying the consideration of the lawsuits related to Covid-19 has a negative impact on the quality of protection of human rights and makes it practically impossible to redress the instances of unconstitutional restrictions of rights.

Covid-19 and Constitutional Review: Assessment of the Effectiveness of the Constitutional Court of Georgia
/public/upload/Blog/ENG Constcourt Full Final.pdf